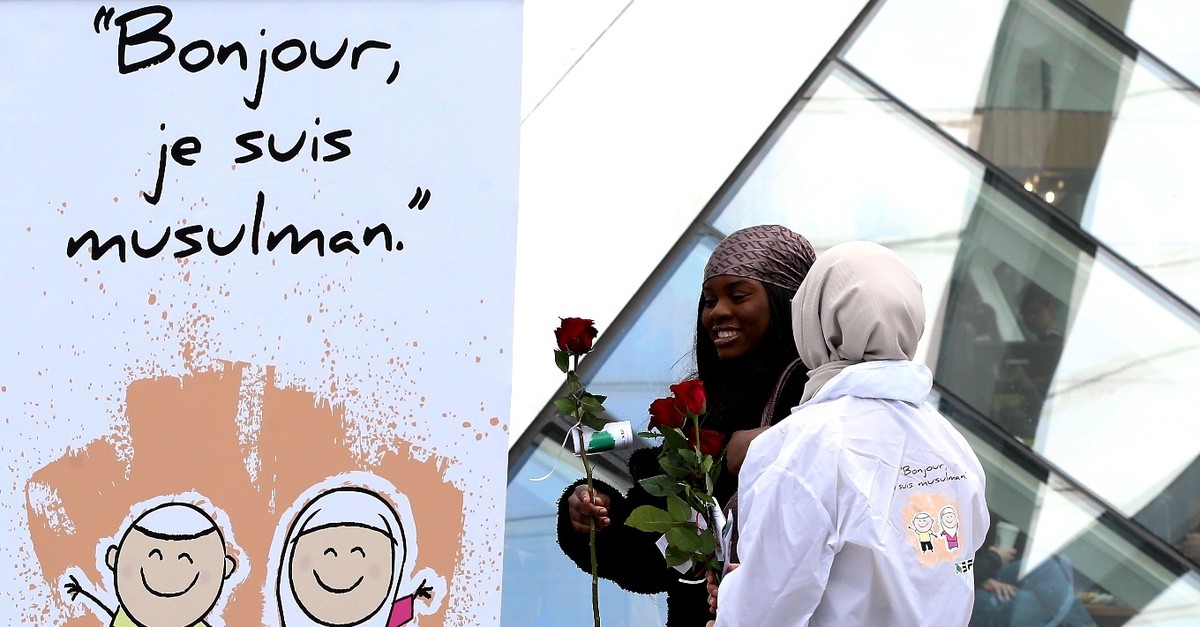 In order to fight anti-Muslim bias, groups of young European Turks handed out flyers with basic information on Islam across European cities

Groups of Turkish youth took to the streets in 10 European countries on Saturday and handed out roses to passersby. In Belgium alone, over 50 Belgian Turks erected information tents in six cities for the "Hello, I'm a Muslim," or "Bonjour, je suis musulman" in French, initiative. To make people rethink their preconceived opinion of Muslims and their beliefs, the passersby were given flyers with basic information on Islam. Free hugs were also offered by both sides in a positive atmosphere that melted many prejudices.

The initiative, which first started six years ago, has now expanded from Germany to the Netherlands, Austria, Belgium, France, Denmark, Norway, Sweden, Italy and Switzerland. Turkish youth in Australia and Canada also participated for the first time. Organizers say over 210,000 people were given roses and informative leaflets in 12 countries.

Meanwhile, Belgian-Muslims of Moroccan origin started a blood donation campaign in Liège "For goodness and friendship." The event, in which some 400 people donated blood, was co-organized by the Islamic Cultural Center, the Student Union of the University of Liège and the Belgian Red Cross. The annual program marked its first this week and blood donation locations are situated in three different parts of the city.

On other parts of the continent, many anti-Muslim attacks are being reported as governments undermine and ignore the societal problem. In one of the latest developments, the British government sacked its housing adviser, Roger Scruton, after he appeared to repeat anti-Semitic statements and denied anti-Muslim sentiments were a problem. In an interview with the New Statesman, Scruton glorified Hungarian right-wing Prime Minister Victor Orban and his immigration policies: "Hungarians were extremely alarmed by the sudden invasion of huge tribes of Muslims." He had also described Jews in Budapest as part of a "Soros empire."

Previously, the Muslim Council of Britain said: "As the Conservative Party faces its latest crisis on Islamophobia, it cannot continue with false promises to take the issue seriously whilst retaining people such as Mr. Scruton as a government adviser." Following the dismissal, a spokesman for the council said: "The reality is that these concerns will continue to recur until trust is rebuilt through an independent inquiry into Islamophobia in the party."

Last month, 14 members of the Conservative Party were suspended after making abusive anti-Muslim comments online. Senior figures and organizations have written to Theresa May demanding a full investigation and to address the issue of anti-Muslim tendencies within the party.

The Labour Party has formally adopted a definition of anti-Muslim sentiments, arguing that it is vital in tackling the rise of far-right racism. A party spokesperson told media in March that its national executive committee had adopted the working definition produced by the all-party parliamentary group on British Muslims "to help tackle Islamophobia, build a common understanding of its causes and consequences, and express solidarity with Muslim communities."