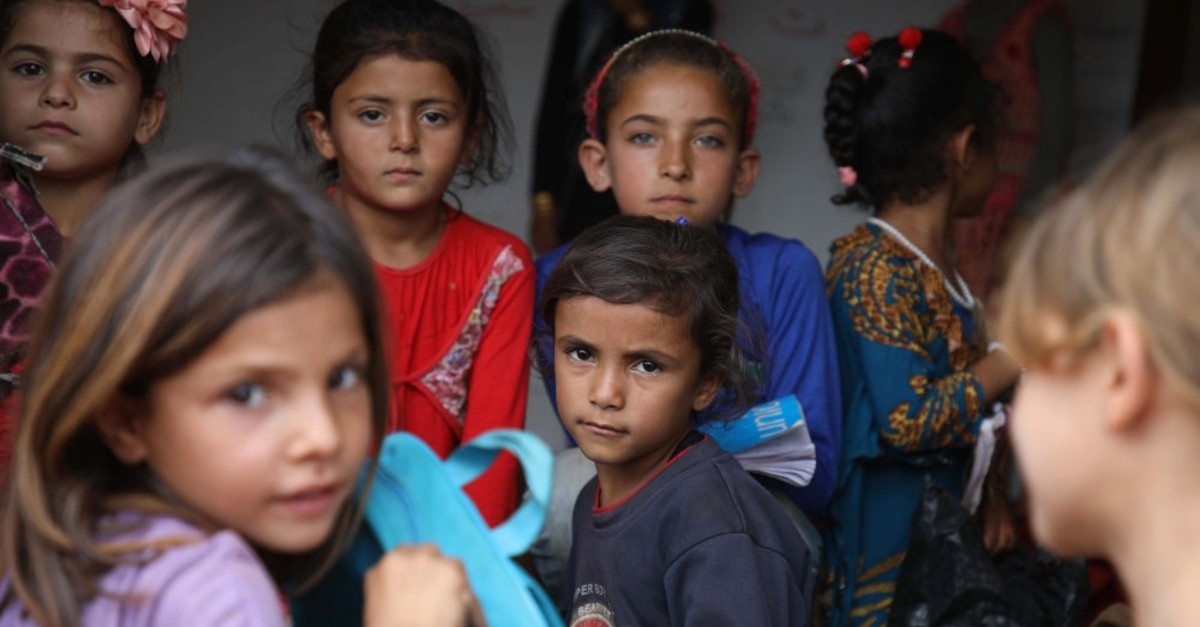 Syrian children, who fled with their families from the northern countryside of Hama, are pictured in a classroom in the al-Jeneinah camp for displaced people in Idlib province, Oct. 1, 2018.
by Daily Sabah Apr 19, 2019 12:15 am

In the eight-year civil war, drug addiction among children in regime-controlled areas is emerging as yet another humanitarian crisis

Drug use and addiction among children living under the rule of the Assad regime in Syria has reportedly reached very high levels as footage of children under the influence has been circulating on social media recently.

According to information that Anadolu Agency (AA) reporters received from locals, one of the main reasons behind this rise in drug use among children is the sociological factors caused by the eight-year civil war. Forcing children to use drugs in order to turn them into loyal beings that work as beggars in the street is another common factor that has caused the addiction problem to reach such levels.

The footage of a 10-year-old girl smelling a bag of "bally" (synthetic glue) and nearly fainting in the eastern rural Barada Valley of the capital Damascus drew the attention of many people to the issue as the footage went viral on social media. In the footage, the little girl is shown as saying that her mother is dead and her father is in prison.

The problem is not only on the rise in the capital province of Damascus. Syria's Vatan daily, a pro-Assad regime media source, reported in recent months that in 2018, 6,939 people, mostly children, were admitted to the Ibn-i Rust Hospital, which is the only health facility for drug addicts in the country's northern Aleppo province. The use of heavy drug substances such as opium and heroin are very common among children and youth, based on a statement by an official working in the hospital, showing a clear picture of the brutal conditions of life under the Assad regime.

It was nine years ago when a group of young people organized peaceful protests against the Syrian regime in southwestern Daraa province only to be brutally oppressed by regime forces. Yet, despite all these years of war, conflict and displacement, not much seems to have changed in the war-torn country; the regime still insists on its brutal actions, while the opposition continues to resist as much as they can. In the end, it is the civilians who suffer the most.

Hundreds of thousands of civilians died in these last eight years, while 5.68 million civilians have been forcibly displaced, 6.6 million civilians displaced domestically and 2.98 million civilians currently live in hard-to-reach regions or areas under siege. Syrians have also had to face the torturous regime's prisons. According to a recent report by the Syrian Network for Human Rights (SNHR), at least 127,916 civilians are being held in regime prisons, while 13,983 people died as a result of torture by regime forces. The torture by regime forces, however, has not been restricted to only prisoners, as civilians have also been targeted; in fact, they were targeted 216 times with chemical weapons.

The regime also continues to attack the last opposition-held area, the northwestern province of Idlib, despite the deal between Turkey and Russia. The last attack occurred yesterday as regime forces attacked a tent city within the borders of the demilitarized zone in Idlib, killing seven civilians and injuring at least four.

White Helmets Chairman Mustafa Hac Yusuf told AA that regime forces carried out an artillery attack on civilians in a tent city in the village of Um Tüveyne, killing seven, including three children and injuring at least four.

According to the report released by the Syrian Network for Human Rights (SNHR) on April 2, 135 civilians were killed by the attacks of the Assad regime and terrorist groups backed by Iran and Russia in March.

A local civil society organization called Syria Intervention Coordinators stated that 160,583 civilians from 25,776 families had to migrate to different places, including areas near the Turkish border, between the dates Feb. 9 and April 6 when attacks intensified again.

President Recep Tayyip Erdoğan and Russian President Vladimir Putin agreed in September 2018, following their talks in Sochi, to establish a demilitarized zone in Idlib to decrease tension and prevent new conflict in the province. According to the 10-article memorandum signed between Ankara and Moscow during the meeting, the Idlib de-escalation area will be preserved, and Turkish observation posts will be fortified and continue to function. Russia will also take all necessary measures to ensure that military operations and attacks on Idlib are avoided, and the existing status quo is maintained.

As Turkey and Russia stepped in and averted a possible disaster, the Sochi deal was internationally welcomed. In relation to the implementation of the agreement, Turkish and Russian officials have been taking positive stances, stressing that the process has been continuing in line with the deal. Yet, the regime and its supporters have been attempting to violate the agreement. Almost eight years into Syria's grinding civil war, Bashar Assad's regime controls around two-thirds of the country.