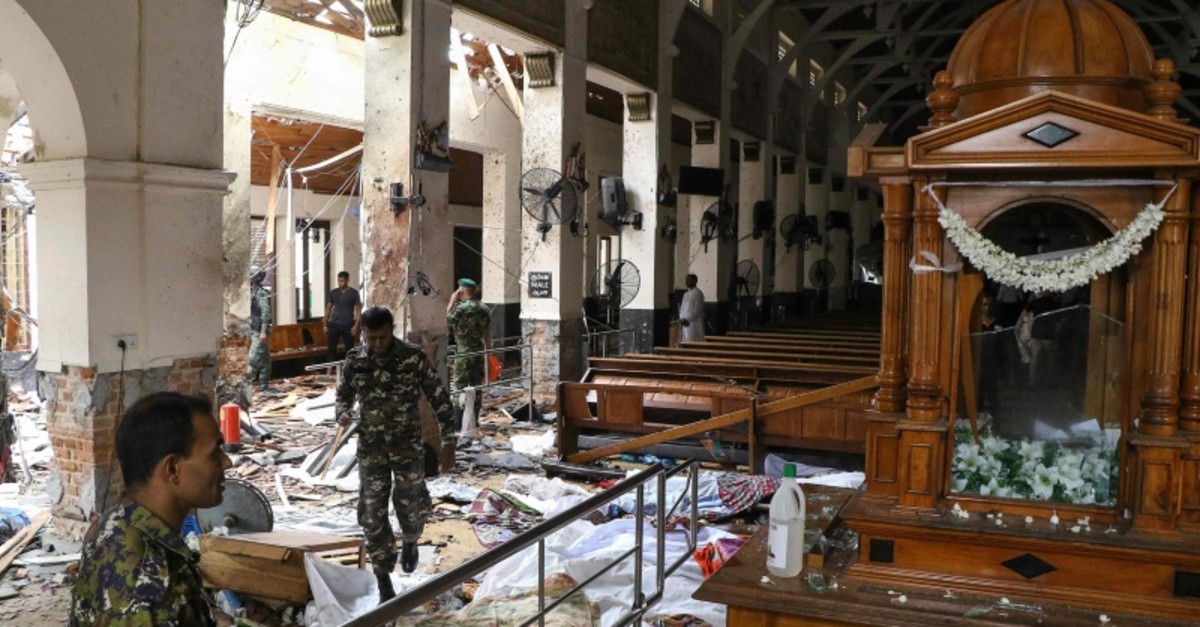 / Sri Lankan security personnel walk past dead bodies covered with blankets amid blast debris at St. Anthony's Shrine following an explosion in the church in Kochchikade in Colombo on April 21, 2019 (AP Photo)
by Daily Sabah with AA Apr 21, 2019 12:42 pm

Turkish officials on Sunday condemned multiple bomb attacks in Sri Lanka that left at least 290 dead and over 450 people wounded.

In a Twitter post, President Recep Tayyip Erdoğan said: "I condemn in the strongest terms possible the Easter terror attacks in #SriLanka. This is an assault on all of humanity."

"On behalf of the Turkish people, I offer my condolences to the families of the victims and the people of #SriLanka, and wish a speedy recovery to the injured," he added.

"This barbaric attack in Sri Lanka once again demonstrated the need for a decisive fight against all kinds of terrorism," Erdoğan said in a separate statement Sunday.

Erdoğan also expressed his solidarity with Sri Lanka against terrorism.

"Unfortunately we lost our citizens...in the treacherous attacks in Sri Lanka," Foreign Minister Mevlüt Çavuşoğlu said in a statement. Çavuşoğlu said the ministry was in contact with their families and it would ensure that the funerals were held in Turkey shortly.

Çavuşoğlu had earlier condemned the attacks "targeting innocent people in churches and hotels during Easter."

"No matter what the motive is, the heinous terror attack in Sri Lanka is the same as the one in Christchurch (New Zealand): cowardly, barbaric and cruel. Terror has no religion, no nation, no geography," he said.

Presidential Spokesperson Ibrahim Kalın offered his condolences to the wounded and condemned the attacks.

"I offer my condolences to those who lost their lives, and wish the wounded a speedy recovery," he said and added: "We reject all kinds of terrorism, regardless of its perpetrators, source and ideology."

No groups have claimed responsibility.

The government has declared a curfew after the blasts and has prohibited access to major social media and messaging services.