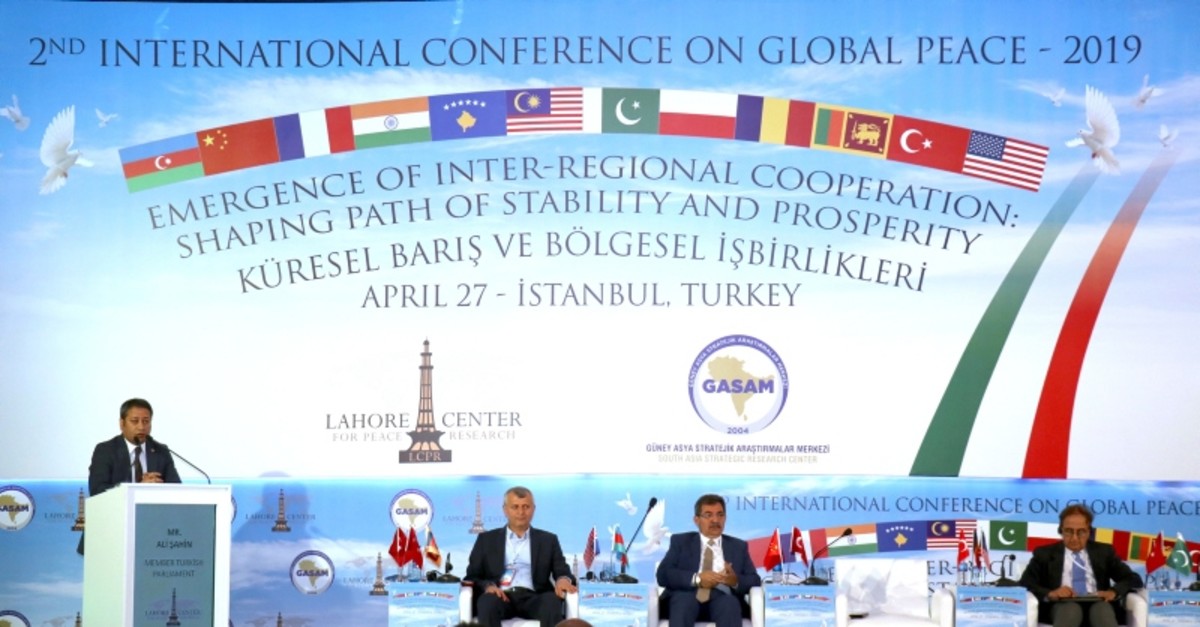 The second edition of the International Conference on Global Peace was held in Istanbul on Saturday to discuss inter-regional cooperation in South Asia as well as across the world.

Organized by Lahore Center for Peace Research (LCPR) and Istanbul-based South Asia Strategic Research Center (GASAM), the conference brought together many scholars, international experts and diplomats in the city.

In his opening speech, professor Mujahid Mansoori, executive director of LCPR, cited Albert Einstein as saying: "Peace cannot be kept by force. It can only be achieved by understanding."

"Besides the traditional instruments, we understand that this [peace] cannot be achieved in a [single] day," Mansoori said.

"Inter-regional cooperation is a strategy for bringing humanity together despite the geographic distances that exist," Rizvi said.

"This encourages economic and social development and strengthen societies. […] It is a short strategy for fighting poverty and underdevelopment that challenge all of us.

"We need to sit together, talk to each other to promote inter-regional cooperation with the objective of providing dividends to all," the professor said.

Shamshad Ahmad Khan, a veteran Pakistani diplomat, who served as the foreign secretary of Pakistan from 1997 to 2000, conveyed the message of Sohail Mahmood, the incumbent foreign secretary.

"Inter-regional cooperation holds the key to many of the world's problems, not just in the political sense, but also broadly, in terms of people to people, business to business, government to government and sector to sector contacts and collaborations," Khan quoted Mahmood as saying.

"In sync with its rich heritage, Pakistan sees itself, therefore, very much as a global and regional citizen and a factor for regional and global integration.

"I am confident that this conference will prove a useful springboard for fresh thinking and initiatives and help further enrich policymaking in both Islamabad, Ankara and indeed, in other regional capitals," the message concluded.

Cemal Demir, president of GASAM. stressed the importance of establishing relations between Islam and eastern and western world based on "common sense."

"A culture of living together is difficult but not impossible," Demir said.

"We will only be closer to regional and global peace when Islam, as well as eastern and western civilizations, become communities, which race toward goodness," he added.

In his speech, Idris Gulluce, former Turkish minister of environment and urbanization, said: "We should not be deceived by cruel leaders. We should be sincere to the religion, whichever one we practice."