Moscow does not rule out offensive in Idlib, but says 'unnecessary' for now 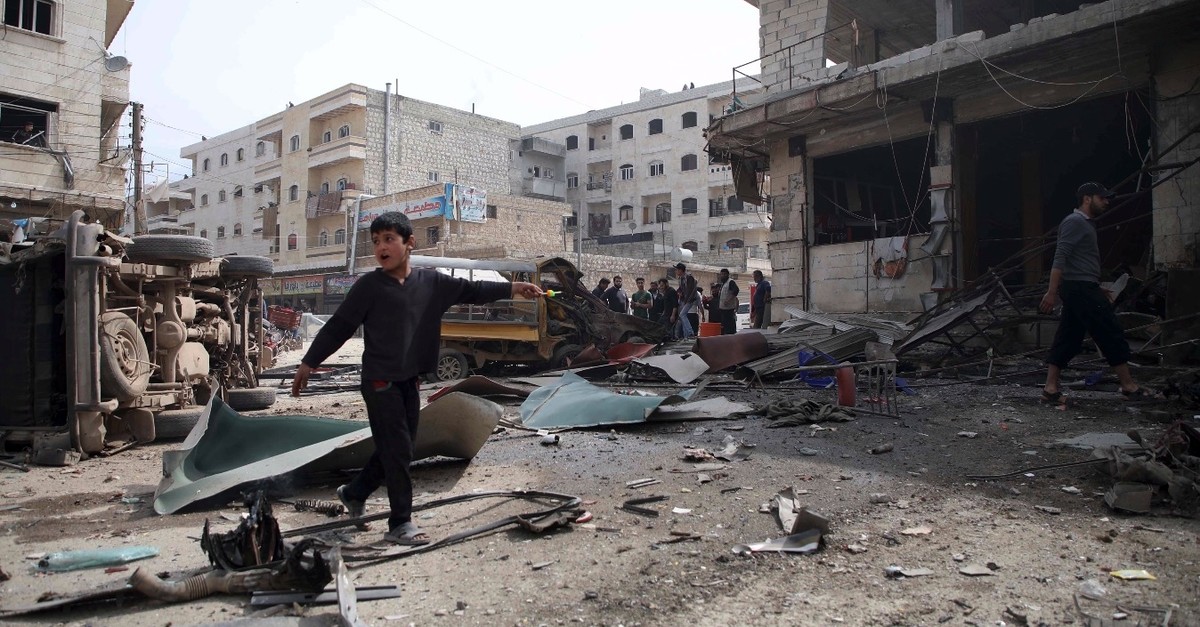 Residents walk among debris from the reported explosion of a booby-trapped motorcycle in the northwestern Idlib province of Syria, April 27, 2019.
by Daily Sabah with AA Apr 29, 2019 12:09 am

Russia still sees attacking Idlib as a possible option despite efforts to bring peace to the region, adding that it is avoidable for now as there could be a major humanitarian crisis

Russia does not rule out a military offensive to the northwestern province of Idlib, the last opposition stronghold, but considers it as "unnecessary" for the moment because of possible civilian casualties, President Vladimir Putin said on Saturday. "In principle, I do not rule this [offensive] out, but today together with our Syrian friends, we believe that this is inappropriate, given this humanitarian component," he said. Russian air forces will continue to provide support to the Syrian army as part of its fight against terror, Putin also said, speaking at a news conference following the Belt and Road Initiative forum in Beijing, China. Putin further commented on the establishment of the Syrian constitutional committee.

He said Russia and Turkey had prepared a list of candidates for the committee, but former U.N. Special Envoy for Syria Staffan de Mistura refused to approve it because of six persons.

Russia and Turkey then replaced those six persons, but there are still difficulties.

"Reaching a complete consensus is quite a challenging task due to the lack of unity in the opposition with its multiple points of view and diverse groups. Still, we will work with all opposition groups patiently and persistently to ensure that this committee is formed since this is the only way to lay the foundation for a large-scale political process," he said.

So far, Turkey and Russia have taken many steps to prevent any offensive in Idlib, from the Sochi deal to the Astana talks, which makes Putin's latest stance on not completely opposing the idea of an offensive questionable. The Sochi agreement was reached on Sept. 17 by President Recep Tayyip Erdoğan and his Russian counterpart Putin. According to the agreement the ceasefire in the Idlib region will be preserved, with the withdrawal of heavy arms and radicals from the region. Prior to the agreement, the Bashar Assad regime was signaling a grand operation toward Idlib, which is the last stronghold of the opposition, sparking deep fears in the international community of a new humanitarian crisis. As Turkey and Russia stepped in and averted a possible disaster, the Sochi deal was internationally welcomed. In relation to the implementation of the agreement, Turkish and Russian officials have been taking positive stances, stressing that the process has been continuing in line with the deal. Yet the regime and its supporters have been attempting to violate the agreement.

In addition to the Sochi deal, the latest of the Astana peace talks took place last week in Nur-Sultan, the capital of Kazakhstan. Following the summit, the Turkish Foreign Ministry released a statement, saying that the determination over stabilizing Idlib has been confirmed once again, while appreciating the coordinated patrols of the Turkish and Russian sides.

The first meeting of the Astana process was held in Turkey in January 2017 to bring all warring parties in the Syrian conflict to the table to facilitate U.N.-sponsored peace talks in Geneva. The Astana talks support the establishment of the U.N.-backed constitutional committee in Syria as a way to find a political solution. The planned constitutional committee, including representatives from the opposition, regime and guarantor countries, will be tasked with writing and establishing Syria's post-war constitution, which is seen as a stepping-stone to elections in the war-torn country.

The statements by Putin over Idlib received immediate reaction from the Syrian opposition forces, who noted that while the situation in Idlib was the main topic in the latest Astana summit last week, the region continued to be attacked, and civilians have been killed.

Releasing a statement on the matter, the opposition indicated that Russian support to the Syrian regime is the main reason behind the civilian casualties and insisted that the struggle of the opposition forces will last till the defeat of the regime forces.

Meanwhile, the attacks in the region continue nonstop as local sources said yesterday that at least five civilians have been killed in an airstrike on residential areas in Syria's northern de-escalation zones.

The sources said an unidentified warplane late Saturday hit Qalaat Al-Madiq town and Al-Hawash village, both located in the western countryside of Hama city and falling within the de-escalation zones.

Sources from the White Helmets civil defense agency said five civilians, including two women, had been killed in the airstrike in Qalaat Al-Madiq.

According to the Syrian opposition aircraft observatory, Qalaat Al-Madiq and Al-Hawash were targeted by a "Russian jet, which took off from the Khmeimim airbase in Syria's western Latakia province."