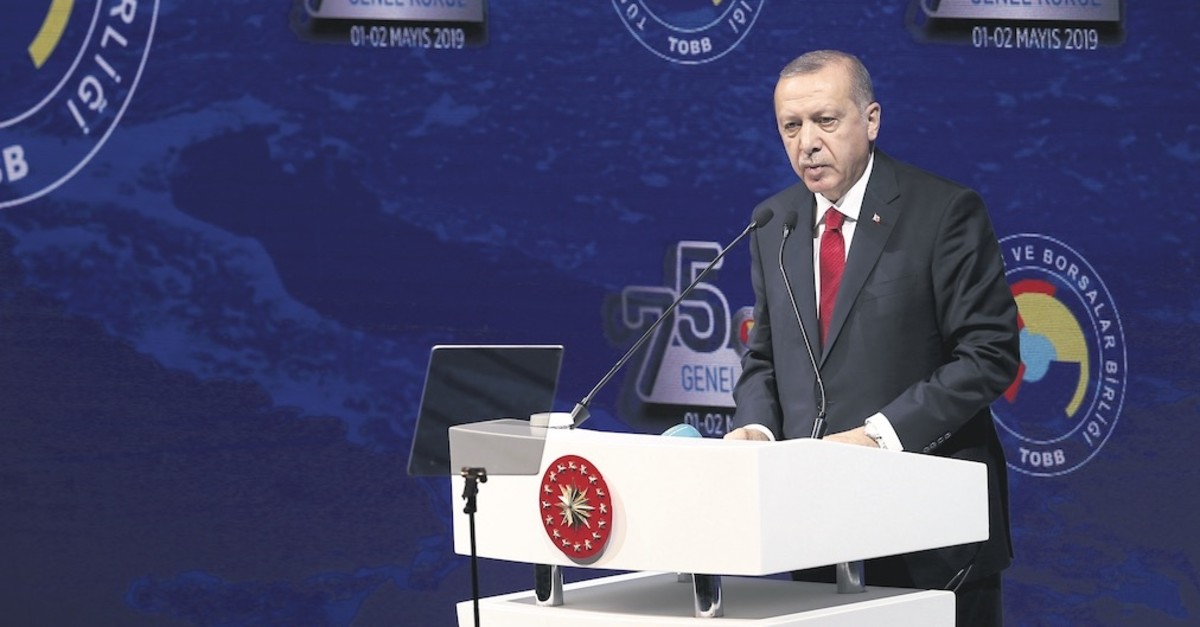 President Recep Tayyip Erdou011fan speaks at the general assembly of the Turkish Union of Chambers and Commodity Exchanges (TOBB) in the capital Ankara, May 2, 2019.
by Daily Sabah May 03, 2019 12:28 am

Speaking at the general assembly of the Union of Chambers and Commodity Exchanges of Turkey (TOBB), President Erdoğan reiterated his support for the People's Alliance and rejected attempts at distortion

President Recep Tayyip Erdoğan criticized those trying to manipulate the meaning of the term "Turkey Alliance," suggesting that the alliance is not an alternative to the ongoing People's Alliance between the ruling Justice and Development Party (AK Party) and the Nationalist Movement Party (MHP). Speaking to the Turkish Union of Chambers and Commodity Exchanges (TOBB) in the capital Ankara, Erdoğan yesterday clarified the meaning of a Turkey Alliance, which is a slogan that has recently been used by the president to invite all political actors to unite around collective interests and future goals to leave polarization behind. "We have never run away from embracing each other. That's why we call it a 'Turkey Alliance.' That's why we call it the 'People's Alliance,'" said Erdoğan.

He then accused those trying to manipulate the meaning of the term Turkey Alliance to attack the People's Alliance.

"Some people have been attempting to cause unrest by manipulating the Turkey Alliance as an alternative for the People's Alliance," said Erdoğan and added that the People's Alliance was formed under the threat of bullets and bombs on the night of July 15, referring to the failed coup attempt orchestrated by the Gülenist Terror Group (FETÖ) and its U.S.-based leader Fetullah Gülen on July 15, 2016, which left 251 people dead and nearly 2,200 injured.

Erdoğan also criticized the opposition and said, "Those who walk hand-in-hand with terrorist organizations cannot be in an alliance with us," pointing to the secret alliance between the Republican People's Party (CHP) and the Peoples' Democratic Party (HDP) for the March 31 elections.

The CHP had refrained from officially including the HDP, which has been condemned for its close ties with the PKK, in its electoral alliance with the far-right Good Party (İP) amid fears of a possible backlash from its secular-nationalist voter base.

The HDP is known for its support of autonomy in regions where large Kurdish populations live. Also, some of its members have been charged for or accused of having links to the terrorist organization PKK that has been fighting the Turkish state for more than 30 years and left more than 40,000 dead.

Erdoğan also said Turkey neutralized over 170 terrorists in April and that last night 12 terrorists from the PKK and its Syrian wing, the People's Protection Units (YPG), were captured in the Aegean province of Izmir. In its more than 30-year terror campaign against Turkey, the PKK, listed as a terrorist organization by Turkey, the U.S. and the EU, has been responsible for the deaths of thousands, including women and children.