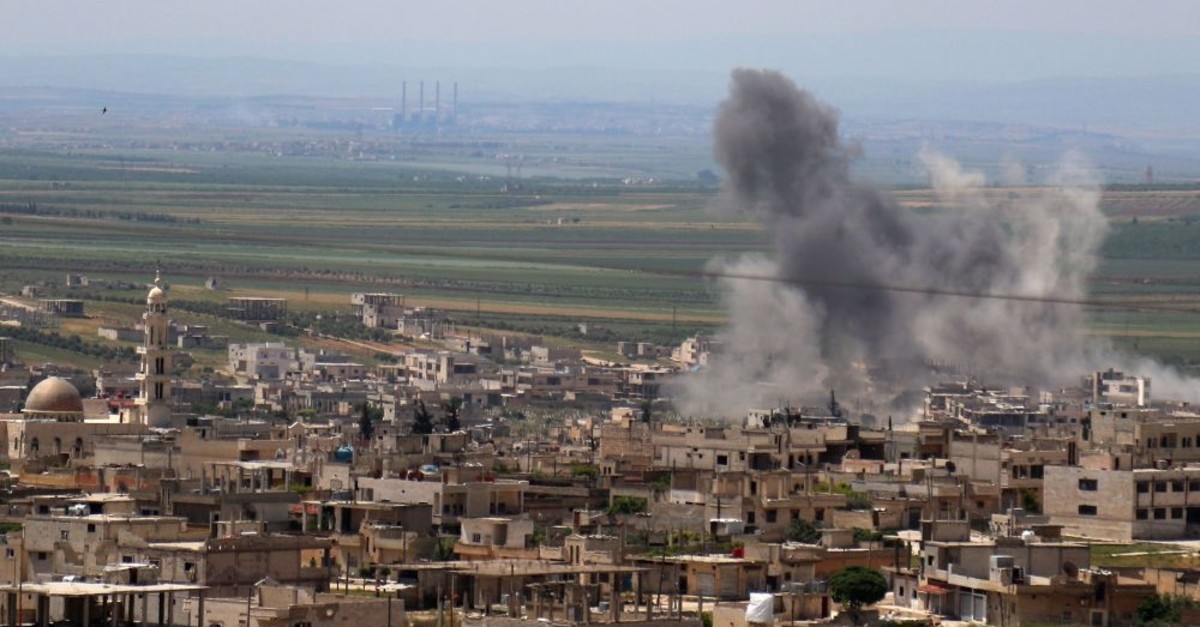 Intensified attacks by the Syrian regime and Russia in Idlib may lead to another humanitarian crisis by sparking new refugee flows, a threat for not only Turkey but also Europe

Massive amounts of people have been pouring into refugee camps in northern Syria due to the intensified air raids of the Bashar Assad regime and Russia in northwestern Idlib province, sparking a possible new wave of refugees that could head to Europe through Turkey.

The number of refugees in Atmeh camp, located near Turkey's border district of Reyhanlı, has reached 600,000, with a wave of newcomers flowing in after fleeing increased attacks since late April.

According to various nongovernmental organizations (NGOs), the Assad regime and Russian forces have dropped more than 3,000 bombs on Idlib in the past two weeks, which has led to the deaths of some 114 people and injured 248 others. Fleeing the intense airstrikes, approximately 100,000 new refugees have arrived at the Atmeh camp within the last 20 days. It is estimated that nearly 800,000 people are being sheltered in tents and villages around the Atmeh camp. While the Free Syrian Army (FSA) is providing security around the camp, a significant amount of humanitarian aid has been sent by Turkish NGOs and state organizations. However, problems with food supplies, heating and sanitation are aggravating the daily lives of the refugees.

Idlib, home to 1.5 million people, is the last opposition enclave in Syria and has been protected from a massive regime offensive through a deal reached between Ankara and Moscow in September 2018.

Regime forces have been pointing to Hayat Tahrir al-Sham (HTS) terrorists holed up in Idlib as the reason for the intermittent attacks on the city, intensifying their attacks since April 26 despite the agreement that had turned Idlib into a de-escalation zone in which acts of aggression are strictly prohibited.

The mobilization of local people has prompted fear of a new refugee crisis. This is not only a concern for Turkey, a country that already hosts nearly 4 million refugees, but would also have implications for Europe. It has been estimated that around a half million people may arrive in Turkey, from where they might attempt to cross into Europe.

Aware of the approaching crisis, the European Union last week called for protecting the inhabitants of Idlib and ensuring humanitarian access to the province. "With the marked increase of airstrikes over Idlib province and northern Hama over the past weeks and days, we are once again running the risk of a dangerous escalation in Idlib," said a statement by the EU. "The civilian population cannot afford this risk; they have already suffered far too much," the statement added.

Germany also condemned the Syrian regime strikes in Idlib province over the past two weeks that have killed over 100 civilians.

Speaking at a news conference in Berlin on Wednesday, Germany's deputy foreign ministry spokesman said the Syrian regime and its allies have violated international humanitarian law by targeting schools and hospitals. Amid mounting airstrikes, Ankara called on Russia on Thursday, the other party of the Idlib agreement, to halt airstrikes in the province. Foreign Minister Mevlüt Çavuşoğlu asked his Russian counterpart, Sergey Lavrov, to stop the bombardments, reported Anadolu Agency (AA), citing diplomatic sources. Following the request, Lavrov said the airstrikes had ended early Friday, the sources added.

The Syrian opposition also reacted to the heavy bombardments, saying on Thursday that the U.N. remains incapable of providing regional security and stability.

"The U.N. is insufficient to ensure regional security and stability. The reason is that Russia always vetoes the decisions of the U.N.," said Naser al-Hariri, Geneva negotiations head of the High Negotiations Committee.

Ahead of Friday's meeting of the U.N. Security Council, Hariri also blamed Russia for not being objective and providing financial and logistic support to the Assad regime, adding that the increasing humanitarian crisis will also pose a threat to bordering countries due to the refugee influx.

Meanwhile, the head of the U.N. Commission of Inquiry on Syria warned Thursday that an all-out conflict in the Idlib province would likely increase human rights violations and generate a humanitarian catastrophe.

Paulo Pinheiro told a news conference that the current aerial and ground offensive by the Syrian regime and its allies "is a serious escalation" which has resulted in scores of civilian casualties and the displacement of over 150,000 people in just one week.

The U.N. World Food Program (WFP) also announced that it suspended humanitarian aid for 50,000 people in Idlib due to security concerns. WFP Spokesperson Herve Verhoosel called on the warring sides to protect civilians and abide by the Idlib agreement between Ankara and Moscow.

A repeat of the bloody Syrian battle that devastated Aleppo must be avoided at all costs, France's U.N. ambassador said Friday as the Security Council met to discuss escalating fighting in northwest Syria.

"A new Aleppo must at all cost be prevented in Idlib," French Ambassador Francois Delattre told reporters ahead of the closed-door council meeting.

"We need to send a very clear message to all those who might be tempted by an escalation in Idlib," Delattre said.

Along with the worsened humanitarian situation due to the airstrikes, Assad regime troops and the HTS have been struggling for territorial gains in Idlib.

According to the local NGO Emergency Response Coordinators, nearly 400,000 civilians have been displaced due to regime attacks on Idlib since the agreement for the de-escalation deal was signed.