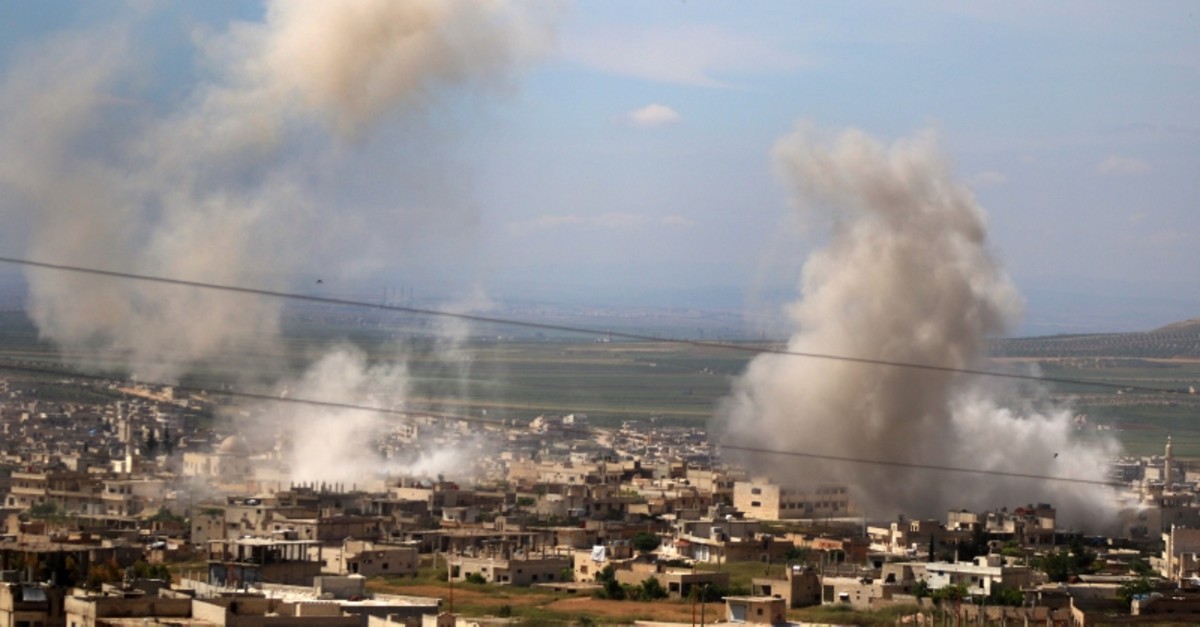 Violence is leading to more violence in northwestern Idlib, as terrorist groups call on civilians to take up arms in response to the intensified attacks of the Bashar Assad regime on residential areas and public buildings

The recent bombardment of northwestern Syria's Idlib, the last opposition stronghold, by the Russia-backed Bashar Assad regime continues to incite more violence in the war-weary region as terrorist groups call on civilians to take up arms. Under the pretext of the fight against the terrorist group Hayat Tahrir al-Sham (HTS), intermittent attacks on the opposition stronghold has continued for three weeks, killing and injuring dozens of civilians while displacing more than 150,000 in a week. Indiscriminate attacks on residential areas and public buildings including hospitals and schools push people to choose between either fleeing from the area to save their lives or joining local groups to retaliate with guerilla tactics. Accordingly, the head of HTS invited people to take up arms against the regime to prevent the death toll of civilians from rising in a video published Sunday.

"We call for anybody able to take up weapons ... to head to the battlefield," HTS chief Abu Mohammad al-Jolani said, stressing that the attacks prove that "only jihadists and military might can be relied on."

Idlib, home to 1.5 million people, has been turned into a shelter for opposition fighters and their families who were evacuated from different parts of the war-torn country.

Being the last opposition enclave in Syria, Idlib has been protected from a massive regime offensive by the deal reached between Ankara and Moscow in September 2018. The deal established a cease-fire in the Idlib on the condition that heavy arms and extremist groups would withdraw from the region.

Prior to the agreement, the Bashar Assad regime was signaling an expansive military operation against Idlib, after it recaptured three "de-escalation" zones out of four determined by the Astana process in Idlib, north of the central city of Homs, the Eastern Ghouta area outside Damascus and in the southern provinces of Daraa and Quneitra.

Meanwhile, Britain, Germany and France called yesterday for an end to the military escalation in Idlib, saying they were gravely concerned at the recent violence which had led to the deaths of more than 120 civilians.

"This military escalation must stop," the joint statement from the three countries, issued by Britain's Foreign Office, said.

"Airstrikes on population centers, indiscriminate bombardment and use of barrel bombs as well as the targeting of civilian and humanitarian infrastructures, notably schools and health facilities, are blatant violations of international humanitarian law," the statement underlined. Following eight months of relative calm, provided by the Sochi deal, Russian-backed regime forces have aggravated their shelling and ground offensive on the opposition-held province and adjacent areas, recovering sw

athes of territories and have only about a kilometer left in reaching Idlib's borders.

"If the Russian leadership wants the bombardment on Hmeimim to stop, it simply needs to stop supporting the regime and

killing the Syrian people and civilians," Jolani said, fueling fears that more civilians dumbfounded by the horrific levels of violence will look for salvation within radicalized groups in the face of indiscriminate attacks. As a response to escalating attacks, HTS launched a number of drones and rockets on neighboring Latakia province, with the intended aim of dropping bombs on Russia's Hmeimim airbase.

Meanwhile, Syrian pro-regime media said yesterday that their troops have captured two villages and a nearby hill in Idlib. The pro-regime Syrian Central Military Media said regime forces captured the villages of Hawash and Jabrieh and Hawash hill on the southern edges of Idlib. The area is near the strategic village of Kfar Nabuda that Syrian regime troops entered last week.