Khashoggi's fiancee urges US to hold Saudis accountable over murder 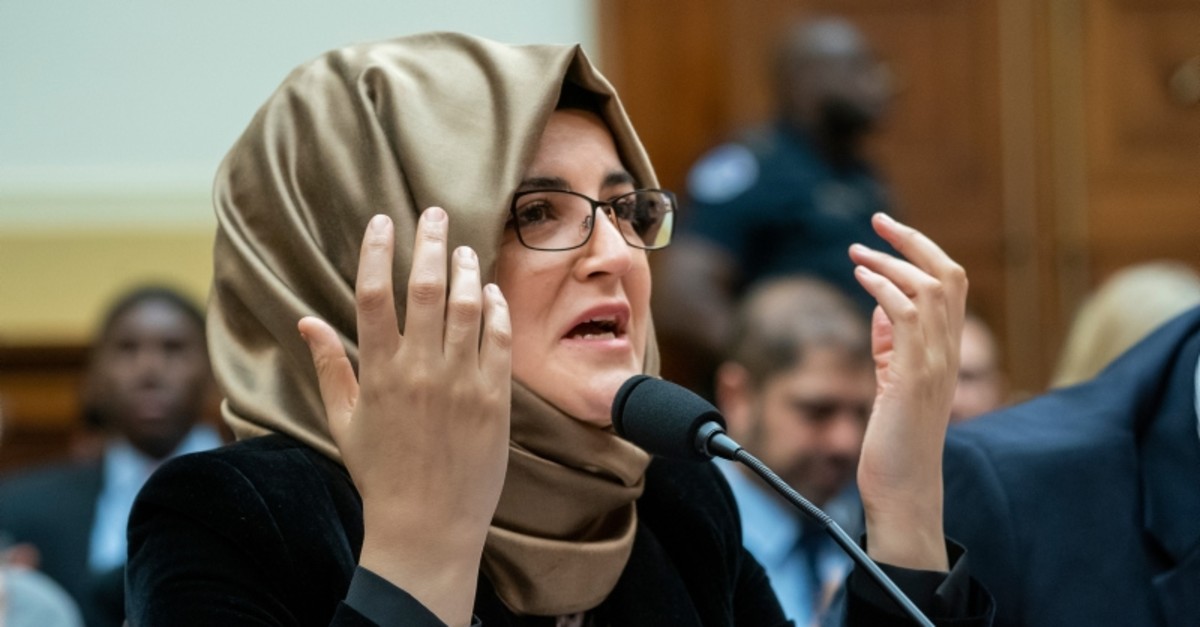 The fiancee of murdered Saudi Arabian journalist Jamal Khashoggi pleaded with U.S. Congress on Thursday to lead a new international investigation and for Washington to push for the freedom of political prisoners held in the kingdom.

Hatice Cengiz poked criticism at the stance taken by U.S. President Donald Trump's administration over Khashoggi's killing, telling a U.S. House Committee on Foreign Affairs subcommittee not enough was being done to hold those accountable for the act.

"I cannot understand that the world still has not done anything about this," Cengiz told a U.S. House of Representatives Foreign Affairs subcommittee, speaking in Turkish through an interpreter.

"I still cannot make human sense of it. I still cannot understand. I still feel that I'll wake up," she said in emotional testimony to a hearing on international press freedom and the dangers of reporting on human rights.

She said Trump told her the issue would be solved, yet "seven, eight months later we see nothing has been done and that is why I'm here today."

Cengiz met Khashoggi at a conference in Istanbul in 2018, and after numerous interactions, the two connected and Khashoggi asked for her hand in marriage, with plans to move to Washington.

She was the last person to see Khashoggi, a U.S. resident and columnist for The Washington Post, before he went into the Saudi Consulate in Istanbul on Oct. 2 to obtain papers for their upcoming marriage.

He never left the building. "We still don't know why he was killed. We don't know where his corpse is," Cengiz said.

"Jamal told me that Washington was a beautiful city and that we would have a beautiful life," she said.

The Saudi journalist, a royal insider who became a critic of Crown Prince M. bin Salman, was killed and dismembered inside the consulate by a team of Saudi operatives, provoking international revulsion.

Cengiz was previously invited to the White House by Trump last year but rejected the invitation, saying "in those days I thought the U.S. values, the value system, would help solve this."

The White House did not immediately respond to a request for comment. In the past, Trump has resisted imposing consequences such as strong sanctions. Saudi Arabia is considered an important partner in the Middle East and a counterweight to Iran.

"It wasn't just Jamal that was killed. It was also what we're talking about here. The values the United States represents – didn't they get murdered as well?" Cengiz said. "I think we choose between two things."

"We can either go on as if nothing has happened... or we can act, we can leave aside all interests, international interests and politics, and focus on the values for a better life," she added.

The CIA concluded in October that Saudi Crown Prince Mohammed bin Salman (MBS) ordered the assassination of Khashoggi. However, Trump disputed the CIA report and told reporters, "The CIA points it both ways. Maybe he did, maybe he didn't," a phrase he had used in a controversial statement released on the incident.

After weeks of denying any involvement in the crime, Saudi Arabia later admitted that Khashoggi had been killed inside the consulate but denied that the royal family and the crown prince had any prior knowledge of or responsibility for Khashoggi's killing. The incident was blamed on lower-level officials, including five that are now facing the death penalty over their involvement. A Saudi public prosecutor said last week that they would seek the death penalty for five suspects among the 21 involved in the case. Ankara has said the statement is not satisfactory and demanded genuine cooperation from Riyadh.