Over 500,000 displaced from Idlib due to regime attacks 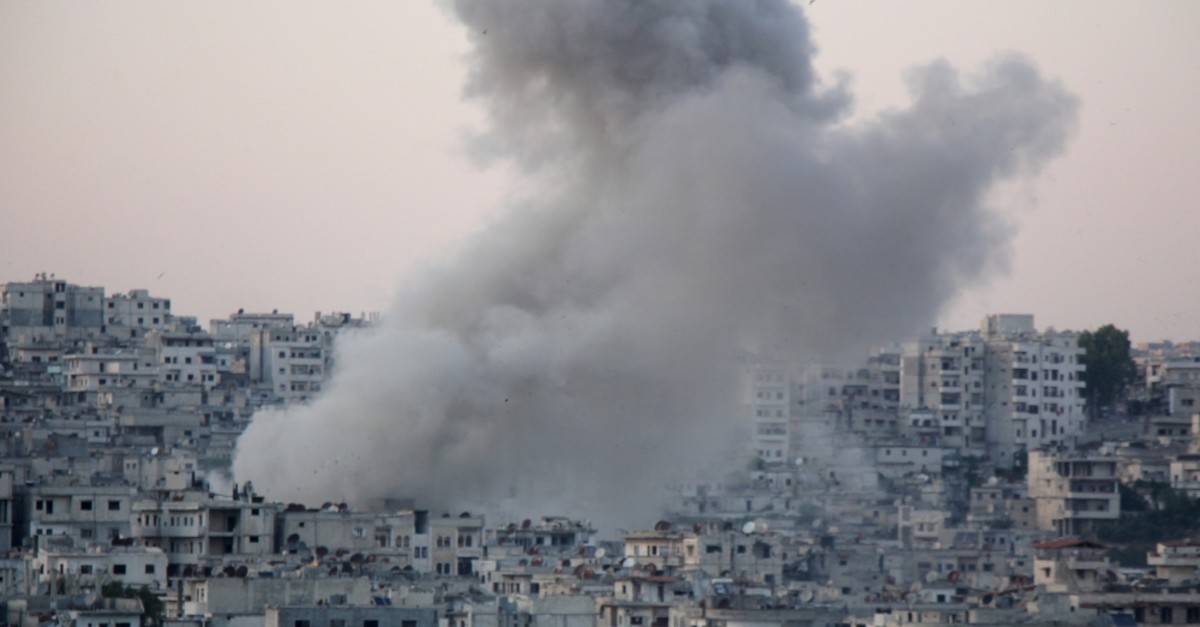 Following eight months of calm provided by the Sochi deal, the Bashar Assad regime has intensified its attacks on the northwestern province of Idlib since April 26.
by Daily Sabah with AA May 17, 2019 12:06 am

Due to intense regime attacks in Idlib, 553,444 civilians have fled the region since September 2018, turning the situation into a major humanitarian crisis

Increased airstrikes and shelling by the Syrian regime in the last opposition bastion of Idlib has left the city destroyed with the number of civilians escaping from the horrors of the attacks surpassing 500,000 since September, when Ankara and Moscow inked the Sochi deal designating the province as a de-escalation zone.

He stressed that the regime forces have carried out air and ground offensives on 97 civilian residential areas in the outskirts of Idlib, Hama and Aleppo.

Pointing out that if the attacks spread to larger areas, it will enhance the number of people asking for shelter, Hallac added that civilians already had to leave their homes in the southeast and southwest of Idlib, and north and west of Hama province.

Following eight months of calm provided by the Sochi deal, the regime has intensified their attacks since April 26 under the pretext of fighting the Hayat Tahrir al-Sham (HTS) militants holed up inside Idlib. The intermittent attacks and bombardments have killed, wounded and displaced hundreds of people. Residential areas have been destroyed by indiscriminate attacks while numerous educational facilities, health facilities and residential areas collapsed or have become unusable after being targeted by bombs.

Idlib is the opposition's last enclave. Its pre-war population of 1.5 million has swelled to around 3 million with new refugee waves after it was designated a "de-escalation zone" under the Astana agreement between Turkey, Russia and Iran in May 2017 to pave the way for a permanent political solution in Syria. Tens of thousands of Syrians trapped in other parts of the country were evacuated there under various cease-fire agreements.

However, after the regime attacks escalated, the inhabitants of the city began to flock to territories liberated by Turkey through operations Olive Branch and Euphrates Shield, including cities near the Turkish border such as Atme, Kah, Deir Hassan, and Kefer Lusin and 12 observat

ion points set up in the region by the Turkish Armed Forces (TSK) in May 2018.

"People in here could not wear clean dresses for 15 days. Our homes were destroyed and looted. People are living under trees. There is no water to drink. Even if we find water, there is no bottle to fill," said Abu Abdo, a civilian who was forced to take shelter under the trees after leaving the rubble of the bombings.

Another civilian, Ahmed Kaddur, underscored that he took refuge in the camp near the Turkish-Syrian border after fleeing from bombardment and living under a tree for 10 days.

Calling on humanitarian agencies and guarantor countries to establish peace in the region, Kaddur underlined that if the bombardments stop they will return to their hometowns as soon as possible.

Despite the Sochi deal, the regime attacks on the last opposition enclave have been escalating for some time now with many injured and killed. It has fueled concerns that a new humanitarian crisis will erupt. It has been estimated that around 700,000 people may arrive in Turkey from where they might attempt to go to Europe.