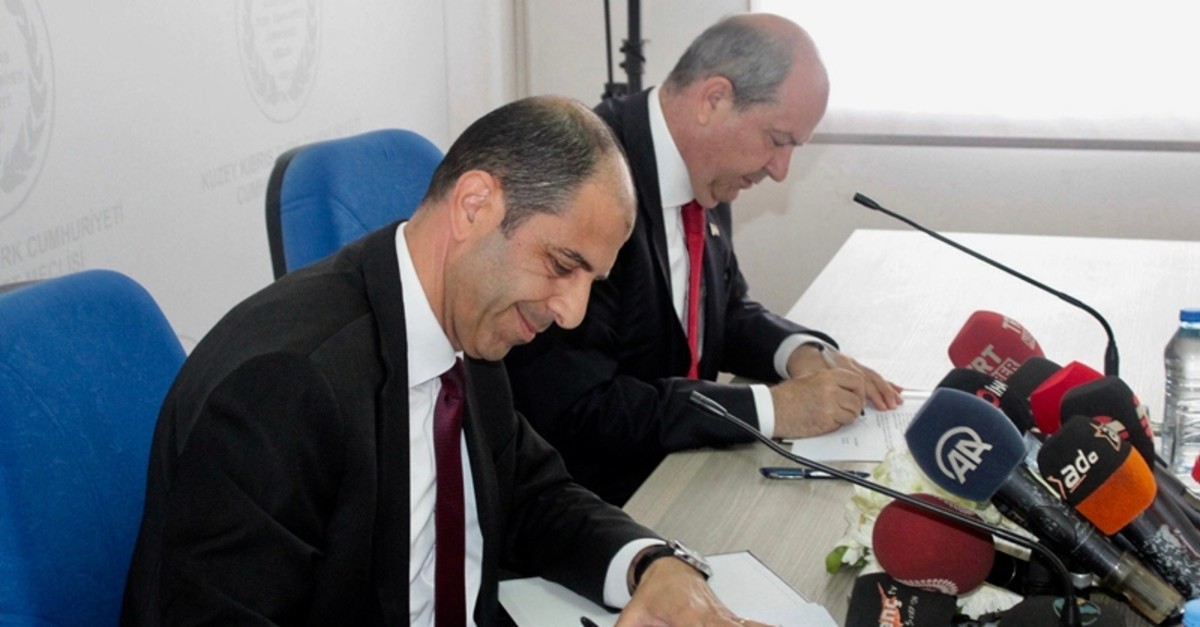 Both parties signed a protocol in Parliament Wednesday and the cabinet list was be handed to the President of the TRNC Mustafa Akıncı, according to TAK.

The UBP previously authorized Chairman Ersin Tatar to establish a coalition and the results of the talks with the HP were shared with the party assembly on Wednesday.

The HP also evaluated coalition talks with the UBP at its own party assembly and voted 40 against 20 to form a coalition government.

The government, which is expected to be approved by Akıncı, will be the 35th in the TRNC's 36-year history.

A government crisis was triggered on May 8 when Serdar Denktaş, the leader of the center-right Democratic Party, stepped down as finance minister of the ruling coalition, led by the Republican Turkish Party's (CTP) leader Tufan Erhürman.

Following the resignation, Kudret Özersay, the leader of the HP who acted as foreign minister and vice prime minister, announced he would withdraw from the coalition as well.

On May 9, Prime Minister and the center-left Republican Turkish Party (CTP) leader Erhürman, in order not to delay the establishment of the new government, delivered the resignation of the four-party coalition to the president.

Following a snap general election on Jan. 7, 2018, the four-party coalition government consisting of the CTP, the HP, the left-wing Communal Democracy Party (TDP) and the DP was formed under the leadership of Erhürman.

Last February, the coalition government won a vote of confidence by 27-22, as one lawmaker was absent from the 50-seat parliament. The UBP and the HP hold 21 and nine seats in Parliament, respectively.

The new coalition will immediately face an ongoing row in the Eastern Mediterranean over unilateral exploration of hydrocarbon resources by the Greek Cypriot Administration, in addition to stalled talks to reach a solution on the island.

The government protocol signed by the two parties said that a federal partnership model discussed over the last century has proved futile, stressing the need for more realistic models to be discussed during negotiations.

The protocol also said fair sharing of hydrocarbon resources around the island is important since they belong to both Turkish Cypriot and Greek Cypriot communities. "The government of the TRNC will protect its legitimate rights and interests in the Eastern Mediterranean region in total cooperation and solidarity with the Republic of Turkey and will bring up its rightfulness in this subject on every available international platform," the protocol said.

Cyprus has been divided since 1974 when Turkey used its guarantor rights to intervene in the island after a far-right Greek Cypriot military coup sponsored by the military junta then in power in Athens sought to unite the island with Greece. The coup followed decade-long inter-ethnic violence and terrorism targeting Turkish Cypriots, who were forced to live in enclaves when Greek Cypriots unilaterally changed the constitution in 1963 and stripped the island's Turks of their political rights.

The TRNC, established in 1983, is only recognized by Turkey and faces a longstanding embargo in commerce, transportation and culture. Meanwhile, the Greek Cypriot Administration enjoys recognition by the international community as the Republic of Cyprus established in 1960, which is a member of the EU.