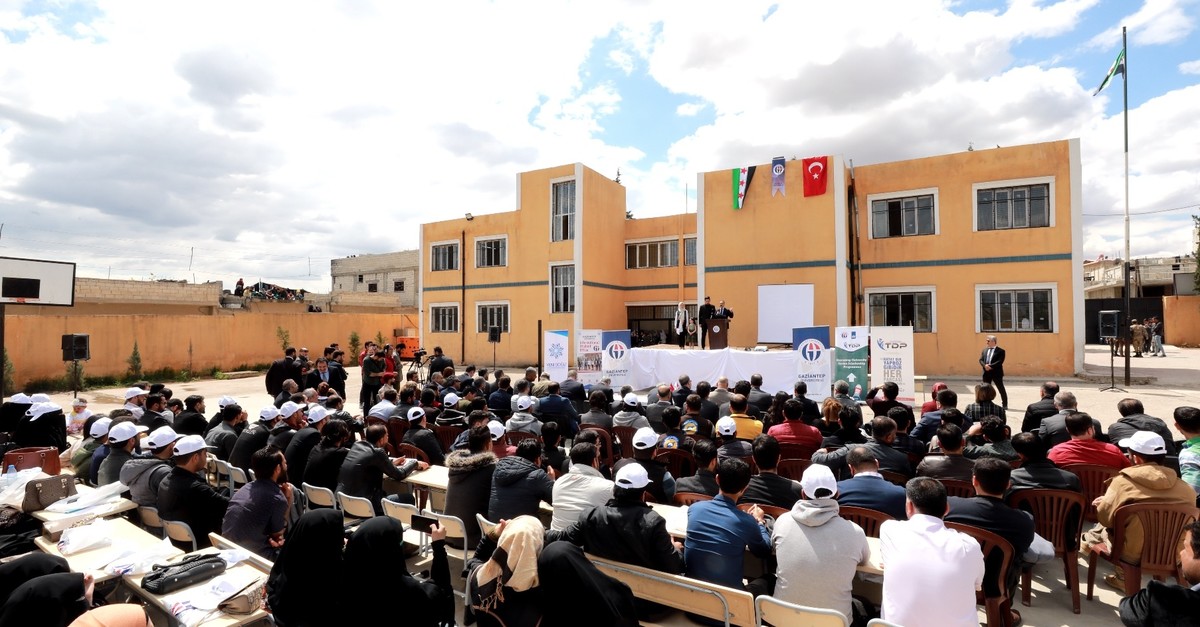 Gaziantep University is preparing to set up four faculties in northern Syria's al-Bab, Azaz and Mare districts, in addition to the vocational school opened last year in Aleppo's Jarablus district, marking another initiative among Turkey's numerous projects in Syria

Being a country that hosts more than 4 million Syrian refugees, Turkey sees investments on education as crucial to helping overcome wounds from the eight-year civil war. Ankara has initiated numerous projects with its own resources and sometimes in cooperation with international organizations for refugees that took shelter in Turkey, while it also spearheads for opportunities to give Syrians a chance of education in their home country.

In this regard, Gaziantep University, located in southern Turkey close to the Syrian border, decided to offer education for Syrians living in the northern part of the war-torn country, the areas that were liberated by Turkey's two cross-border operations.

"There was a high demand from local assemblies and provincial leaders. I went [to northern Syria] myself and saw the demand, they really need it," said Ali Gür, the rector of Gaziantep University, told Anadolu Agency (AA).

The university applied to Turkish education officials to set up four faculties in northern Syria's al-Bab, Azaz and Mare districts, which is planned to focus on economics, business, teaching and engineering; some 2,700 prospective students have already taken proficiency exams. The faculties will be the second move by Gaziantep University as it previously opened a vocational school last year in Aleppo's Jarablus district. While vocational education currently continues in five departments, the university is planning to expand it with four more and to provide education for 500 students.

In 2016, Turkey launched Operation Euphrates Shield and cleared about 2,000 kilometers of area in northern Syria, which was once dragged into darkness by the Daesh terrorist organization. Since then, Turkish authorities have launched many initiatives in education, health, security and social life to bring daily life back to normal in the Euphrates Shield region. which includes Jarablus, al-Bab, Azaz and Mare.

At the beginning of this education year, Harran University in southeastern Şanlıurfa also established a trilingual university faculty in al-Bab.

Education vital for return of refugees

The efforts on education play a key role on Ankara's strategy to provide a convenient environment for refugees to return to their country. Speaking on Gaziantep University's application to open new faculties, Gür said Syrians who return for education and stay in Syria as students will be eligible for scholarships.

"Our aim is to send students back there and educate new generation by rendering it a livable place," he said.

Turkey now hosts more than 4 million Syrian refugees who fled the war and persecution in their country. The return of Syrian refugees has been made possible recently thanks to Turkey's two operations: Operation Euphrates Shield and Operation Olive Branch. While some parts of northern Syria were cleared with Operation Euphrates Shield in 2016 from Daesh terror, Operation Olive Branch was launched in 2018 toward northwestern Afrin province to clear the region of the PKK-affiliate People's Protection Units (YPG). Both these operations proved successful and achieved their goals of bringing peace to the region.

"Some 329,000 people from Syria have returned so far thanks to the peace provided in Afrin and the area liberated by Operation Euphrates Shield," he said at a speech in Istanbul.