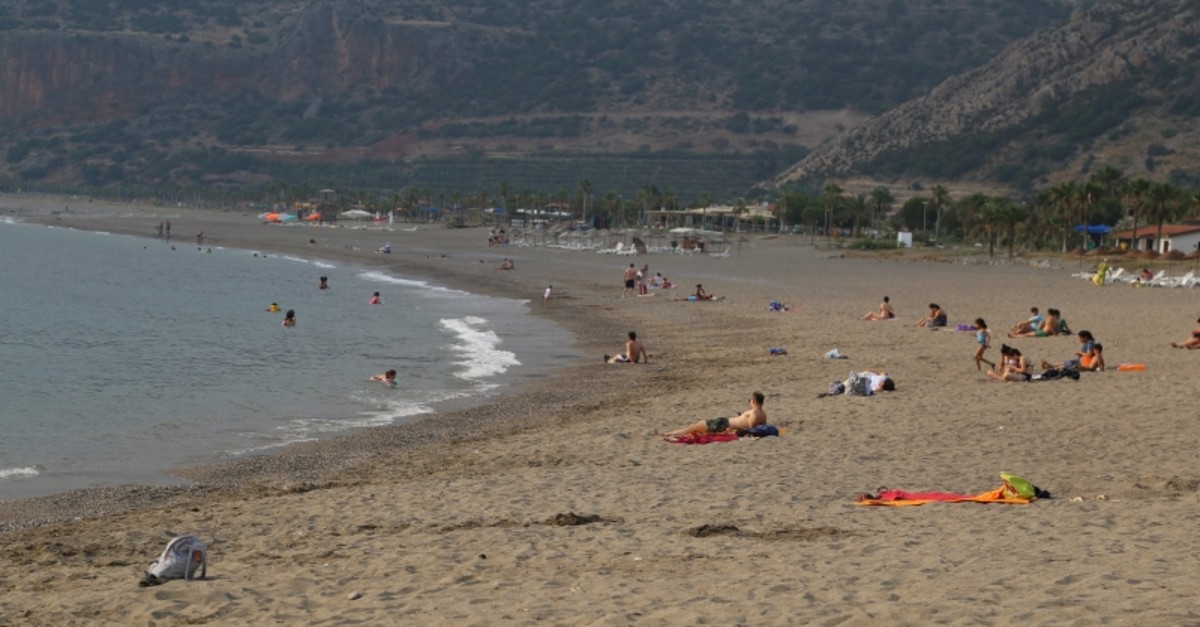 The municipality council in the Gazipaşa district of Antalya in southern Turkey voted in favor of a controversial ban barring Syrians from public beaches in yet another xenophobic and racist practice on behalf of the main opposition Republican People's Party (CHP), only to be vetoed by the mayor from the same party after public backlash.

The motion was brought to the floor by CHP Councilman Ulaş Özgen, an item not on the council's agenda set for Monday, claiming that locals were disturbed by Syrians on the beaches, saying "we are refugees in our own homeland," while the motion itself cited locals and other tourists being photographed by Syrian refugees at beaches and spark fights. It also called for the municipality to establish reserved areas for Syrian refugees.

The proposal sparked discussions with Mayor Mehmet Ali Yılmaz, also from the CHP, demanding that the motion be discussed by a sub-committee first. 10 councilors, including Yılmaz, voted to send the motion to the committee. However, the motion was brought to discussion when 13 councilors voted in favor.

Mehmet Yüksel, the council group spokesperson of the CHP's Nation Alliance partner the right-wing Good Party (IP), told the council that they support the motion. Spokesperson Mustafa Uysal of the Justice and Development Party (AK Party) said the issue is a government policy and voiced their opposition, a view also shared by councilors from their People's Alliance partner the Nationalist Movement Party (MHP).

CHP's Yılmaz won the mayoral election on March 31 as the Nation Alliance's candidate against the People's Alliance candidate Adil Çelik.

Yılmaz told reporters after the session that he was not in favor of discrimination based on nationality or ethnicity. "In the end, we have to pay attention to human rights. Our district is also a touristic region. We shouldn't be looking at the nationality of those who have arrived. If the person visiting is bothering our people, we should do what is necessary," the mayor said, pledging that the municipal police will be enforced in such cases.

"We used to issue warnings to those bothering our citizens before we adopted the motion. We will inform security forces if necessary," he added.

The AK Party's Gazipaşa District Chairman Ali Doğan reacted against the decision, saying that Syrians were Turkey's guests. "Syrians are of Ottoman legacy. They fought under the command of Mustafa Kemal Atatürk in Gallipoli and fell together [with the Turks]. They had martyrs everywhere the Ottoman army fought, and if you paid attention to the cemeteries, you would notice that our graves are side by side. If we have our graves side by side, if we live brotherly as an ummah, a nation, then what it is this (nonsense) that 'they can't enter the beach we enter', is it not ethnic discrimination? Are Syrians the only refugees in this country? We have Afghans, Iraqis, Iranians. We have refugees and guest citizens from all over the world but I don't find it ethical or right when the issue is focused on Syrians and comes to the point of ethnic discrimination against them," Doğan said.

"Those who don't want Syrians entering beaches do not raise their voice when it comes to Syrians working in fields or businesses for cheap," he added.

Later on Tuesday, Yılmaz said in a press conference that he vetoed the motion and returned it to the municipal council. Gazipaşa District Governor Ali Sakar also said in a written statement under Coastal Law No. 3621 that all shores are under the disposal of the government and is open for everyone's equal and free use. "Until the municipal council is authorized on the issue, the council does not have the authority to bring the issue to its agenda and put to a vote. Even if such a decision is taken, since it is against the constitution, the law and international treaties, it would be null and void and could not be enforced," Sakar said, underlining that the mayor vetoed the decision.

The ban attempt in Gazipaşa came after a series of anti-Syrian practices and remarks by CHP officials. Just this weekend, Mayor Hayri Türkyılmaz of Mudanya district in northwestern Bursa province came under fire as he justified a clear-up in a beach through anti-refugee remarks.

"They (Syrians) will obey our rules or will return to their countries. While our children are martyred, our economy deteriorates, they have no right to live in self-indulgence," he told the media, starting a controversy with numerous media outlets reporting that Syrians were banned from entering the coastline, which was rejected by the municipality.

Türkyılmaz had instructed municipal police to clear the tents set up by Syrians, along with animals left grazing in the area including camels and horses, which were also brought into the sea to cool off and to be washed. Local media outlets reported that residents were long complaining that the coastline was illegally occupied by Syrians as well as Turkish nationals, who went swimming in their underwear, littered the area and prevented others from using the public beach. Their complaints increased during the nine-day holiday for Ramadan Bayram, also known as Eid al-Fitr, when millions of people left large cities for their hometowns or holiday resorts.

Previously, Tanju Özcan, the new CHP mayor in northwestern Bolu province, instructed municipality departments to stop relief for foreigners since they were already receiving aid from the central government, saying that Syrian refugees should return home as soon as possible. Despite receiving stern criticism, he later continued to support his anti-refugee plan, saying that Iraqi, Syrian and Afghan refugees were living in the "highest standards" in Bolu.

CHP Mayor Rıdvan Karakayalı of the Kemalpaşa district of western Izmir province is also another example of the CHP's increasing anti-refugee rhetoric, as he promised back in April to expel Syrian refugees.

"We will get rid of Syrians. There is peace in Syria, so what are they doing here?" Karakayalı said on a TV program in response to a question regarding the situation of refugees in the district.

The CHP administration and deputies including Chairman Kemal Kılıçdaroğlu have long voiced that Syrians should return or be forced to return to their home country once the war is over. Turkey is home to more than 3.5 million Syrian refugees under temporary protection status along with some 72,000 others granted Turkish nationality. An additional half a million migrants, mainly from Iraq, Iran and Afghanistan, are also present in the country. Since the outbreak of the Syrian Civil War in 2011 and its spread to Iraq, millions of others are estimated to have crossed from Turkey to Europe and other destinations, especially during the height of the refugee influx in 2015.