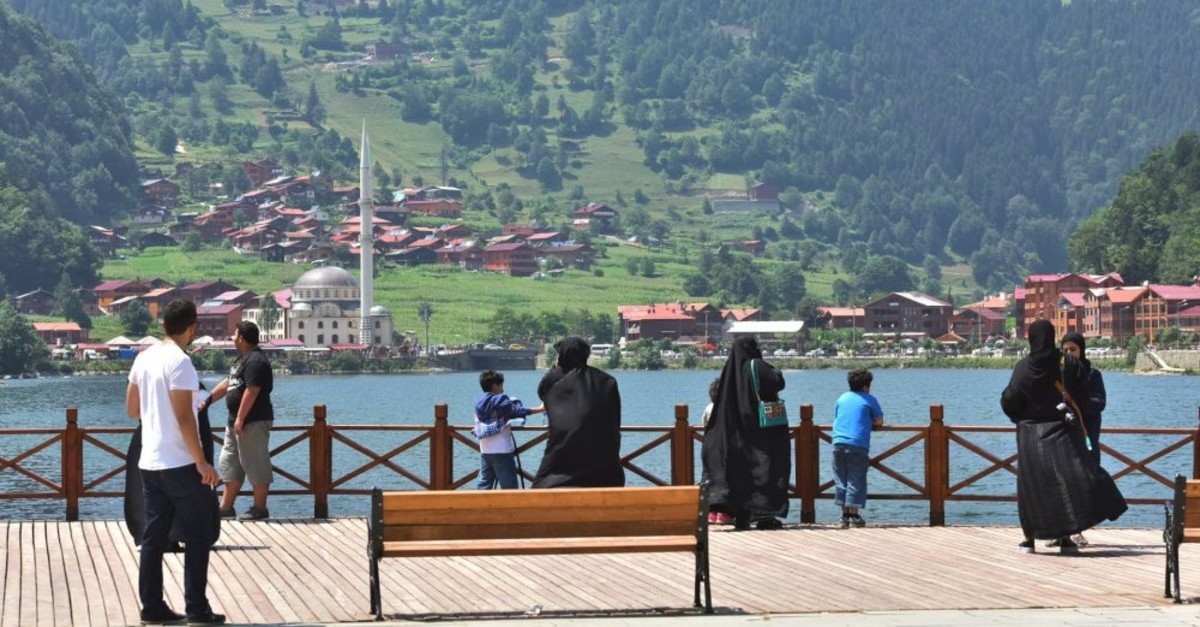 The green mountains of the Black Sea region, with Trabzon and Artvin provinces being the main targets, have became yet another destination for the Arab tourists.
by Şeyma Nazlı Gürbüz
Jun 11, 2019 12:01 am

A video shared by the kingdom's pro-government Al Riyadh daily looks to discourage Saudi people from visiting Turkey, based on fabricated evidence and false claims

As the tourism season has started with the summer warming up Turkish cities, Saudi Arabia seems to be disturbed with its own citizens' interest toward the country, aiming to destroy the friendship between the two societies by asserting baseless claims that are deliberately constructed to discourage Saudis to visit Turkey.

"There are many alternatives for Turkey and they are cheaper," says a video shared by the Al Riyadh daily, which is known for its pro-government stance.

The video, shared on the paper's official Twitter account, continues with loads of allegations that target Turkey, without offering any evidence to base them on. Dedicated to dampening Saudi tourists' plans to spend holidays in Turkey, the video claims that the country is not safe for Saudi citizens, "neither for tourism nor for investment."

As a response to the video, which has already received major reactions, hundreds of Arabic-speaking Twitter users shared their own vacation videos from Turkey to show that Saudis are very well welcomed in the country. The initial video, which was uploaded on Saturday, was removed from the daily's social media account yesterday.

The video was not the only one that was shared by the daily, as another also claims that the number of tourists from other countries, such as United Arab Emirates, Iran and Qatar, visiting Turkey have also decreased and asks, "While Turkey hates and misbehaves, why would you go there?" The hashtags that the videos are using were "boycott Turkish tourism," and "our summer in Turkey is more dangerous" in Arabic.

These claims are not only provocative but also based on lies, as data from Turkey's Ministry of Culture and Tourism proves.

According to 2018 data of the ministry, the number of tourists from the UAE was only 6,717 in 2003, which is very low since in 2018 it increased to 43,292. In only the first two months of the 2019, 1,400 tourists from the UAE visited Turkey, which is 1.9 percent more than the data of the previous year. This successful beginning suggests that 2019 is likely to witness a tourist flow from the UAE even larger than that of 2018. When it comes to Iran, the numbers are even higher, as more than 2 million tourists visited Turkey from the country in 2018.

In fact, according to 2019's first quarter statistics from the ministry, Iran ranks second in the number of tourists visiting Turkey, following Bulgaria. Qatar, on the other hand, has a trend similar to the UAE's, as its number of tourists increased dramatically between 2003 and 2019, from 1,210 to 96,327. These numbers show that, unlike the claims of the Al Riyadh's video, there is an overall rising trend in Turkish tourism that has seen an increasing number of tourists from the UAE, Iran and Qatar, despite minor decreases between some years.

Saudi Arabia itself is not different from the aforementioned three countries, as its number of tourists increased from 23,676 in 2003 to 747,233 in 2018, a dramatic boost indeed. In the first two months of 2019, a total of 20,200 tourists visited Turkey, which is a number slightly less than the data of the previous year's same period. However, this decrease in number actually goes against the overall tourism trend of Turkey as the number of overall tourists in these two months was 9.38 percent higher than the same period of 2018.

A total of 6.8 million tourists visited Turkey from all over the world in the first quarter of 2019, according to the ministry's data, 5.4 percent of whom were foreigners. In terms of the number of tourists, Turkey is ranked sixth in the world according to 2018 data, a year that country hosted almost 46 million tourists. As a matter of fact, the number of tourists, especially from the Gulf region, has been increasing for almost two decades, mostly thanks to the success of the Turkish TV series in the region and the well-established tourism facilities in the country. As Turkish TV series spread all over the Arab world, more and more Arab citizens started to be interested in Turkish culture and language and wanted to visit Turkey, especially Istanbul, to experience it firsthand.

However, in addition to Istanbul, the southern resorts such as Antalya and the cool, fresh and green mountains of the Black Sea region, with Trabzon and Artvin provinces being the main targets, have become yet other destinations for the Arab tourists. Turkey is also known for its success in halal tourism. The country has numerous alcohol-free restaurants, woman-only beaches and swimming pools as well as many prayer halls that are available and accessible all over the country.

KINGDOM TRIES TO SCARE CITIZENS OFF THROUGH FAKE ACCUSATIONS

The biggest, and probably the most ridiculous, claim in the video, however, is the one that aims to scare Saudis off by asserting that in Turkey, they would be sold out to the Daesh terrorist group for "very cheap" prices.

Considering Turkey's fight against terrorism, especially Daesh, the claim is merely absurd, as the numbers prove the adverse. Turkish security forces have been involved in a long-running campaign to rid Turkey of Daesh terrorists. The terrorist group is blamed for a string of terror attacks in Turkey that killed dozens of people over the past three years in Istanbul and Ankara as well as cities in the southeast.

According to official figures, some 2,000 people were arrested, and 7,000 others deported in operations against Daesh in Turkey; while around 70,000 people were denied entry to Turkey over their suspected links to the terrorist group.

All these figures considered, the videos, which are not the first ones in Saudi media to reveal anti-Turkish sentiment, do not present facts but are instead mere political tools that aim to damage Turkey's respectability while trying to frighten Saudis from further developing ties with the country.

One of the reasons behind the kingdom's hostile attitude toward Turkey is last year's killing of dissident Saudi journalist Jamal Khashoggi at the country's consulate in Istanbul.

While the kingdom initially denied any responsibility over the murder and tried to accuse Turkey of not being safe for its citizens, Ankara pursued – and has been pursuing – a determined stance in the case and eventually forced the kingdom to reveal that the crime was actually committed by Saudis themselves. The revelation caused major international backlash toward Saudi Arabia, especially Crown Prince Mohammed bin Salman, whom the CIA mentioned as the mastermind of the murder.

Yet, these videos prove that the kingdom insists on pointing to Turkey as the scapegoat for its own misconduct instead of learning its lesson.