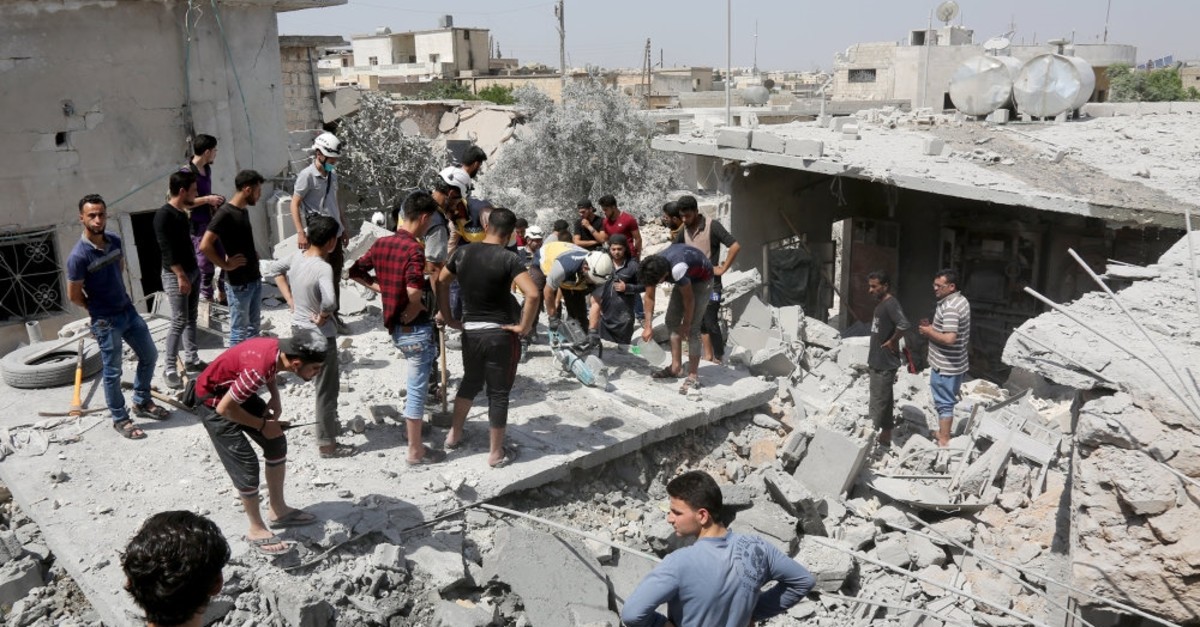 Civil society organizations and rescuers work through the rubble of collapsed buildings destroyed by Syrian regime attacks in Idlib's de-escalation zone, June 11, 2019.
by Daily Sabah with AA Jun 12, 2019 12:15 am

The United Nations reported Tuesday that because of the heavy bombardments in northwestern Syria that have escalated since April, more than 300,000 civilians have had to take refuge in camps near the Turkish border.

The statement came amid the escalation of the death toll in Idlib that saw 20 more civilians killed by the regime attacks. According to a written statement made by one of the organizations of the U.N., the World Food Program (WFP), the violence in the region causes obstacles for the humanitarian operations to the region.

The statement also said the WFP and its partners had to stop their distribution of humanitarian aid in the region, adding that 7,000 people who were living in northern Hama, near Madik Castle, have been unreachable since May. Despite the difficulties of operating in the region, the U.N. still tries to reach civilians, and the latest humanitarian convoy of the organization was sent to the region Tuesday.

Some 33 truckloads of humanitarian aid were sent to Idlib by the U.N. yesterday from the Turkish border.

The statement also underlined that according to satellite images, 18,000 decares of farmland have been burned in the region in the last couple of weeks. The U.N. also warned on Monday that there is the risk of 2 million refugees to flee to Turkey to escape the violence of the regime attacks. "Our fear is if this continues, and if the numbers continue soaring, and if the conflict intensifies, that we could see really hundreds of thousands, a million, two, heading toward the borders with Turkey," the U.N. Regional Humanitarian Coordinator for the Syria Crisis Panos Moumtzis said.

Speaking to Reuters in Geneva, Moumtzis said: "We see an offensive that is really targeting - or with an impact on - hospitals and schools in civilian areas, in areas where there are the population and urban areas which really should not be happening according to international humanitarian law." Idlib is the last opposition enclave in Syria. Its prewar population of 1.5 million has swelled to around 3 million after it was designated a de-escalation zone under the Astana agreement reached between Turkey, Russia and Iran in May 2017 to pave the way for a permanent political solution in Syria.

Tens of thousands of Syrians trapped in other parts of the country were evacuated there under various cease-fire agreements.

Following eight months of relative calm provided by the Sochi deal, reached between Ankara and Moscow, the regime has intensified attacks since April 26, under the pretext of fighting Hayat Tahrir al-Sham (HTS) militants holed up in Idlib.

Meanwhile, the death toll from airstrikes carried out by Syrian regime forces and Russia in the Idlib de-escalation zone climbed to 25 on Monday, according to the White Helmets civil defense agency. Seven of the killed civilians were reportedly children. It said 39 civilians were injured in the attacks, adding that the death toll could rise. Local residents and civil rescuers said warplanes flying at high altitudes were Russian Sukhoi jets and that they dropped bombs on the village of Jabala in southern Idlib, with rescue teams so far pulling out 13 bodies, including women and children. Russian jets were also behind several raids that hit the town of Khan Sheikhoun, Kfar Batikh and several other villages that left at least another 12 civilians dead, according to another local rescuer. The attacks targeted the towns of Ma'ar Shoreen, Khan Shaykhun, Al-Tamanah and Sheikh Idris in the Idlib province and Hama province, in the towns of Ltamenah and Kafr Zayta, the agency said.