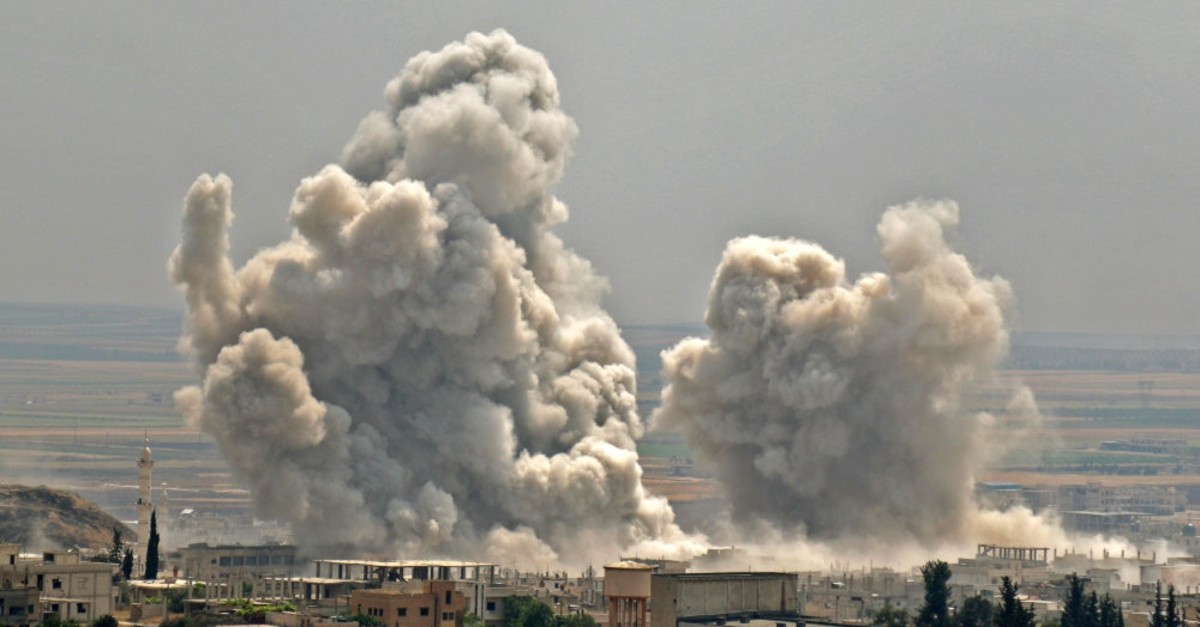 It has been six weeks since the Bashar Assad regime and Russia intensified bombardments and air raids in northwestern Syria's Idlib province, killing nearly 300 civilians and displacing hundreds of thousands.

However, on Thursday, the regime boldly expanded its attacks to another phase, targeting a Turkish observation point located inside the de-escalation zone in Idlib. While attacks rendered Russia's announcement of a cease-fire on Thursday morning incoherent, Ankara pledged to retaliate if more attacks occur.

According to the Defense Ministry, Turkey's 10th observation point was "deliberately" targeted in a mortar attack in which three soldiers were wounded. The observation point located near Mount Zawiyah was targeted by 35 mortar rounds fired from the regime-controlled As Shariah region some 3 kilometers away, the statement said, adding that the observation point facility, equipment and other supplies were partially damaged, and the wounded soldiers were evacuated. Foreign Minister Mevlüt Çavuşoğlu yesterday defined the attack as a "deliberate act of aggression," vowing retaliation if further attacks are carried out.

"We are discussing the issue with Russia. If the attacks continue, we will do whatever is necessary," Çavuşoğlu told reporters in a joint press conference with his French counterpart Jean-Yves Le Drian in Ankara. Kutluhan Görücü, a researcher and editor for the Syrian Agenda website, told Daily Sabah that the latest shelling by the Bashar Assad regime was different from the previous five incidents directed at Turkish observation posts as a deliberate and more comprehensive assault, adding that Turkey has many options to answer these attacks if they continue.

"As the Defense Ministry elaborated, the attack was deliberately conducted with 35 mortar rounds. At that point, Turkey can ask Russia for an explanation and to stop the attacks. In case of further attacks, Ankara can directly retaliate against the regime instead of using proxies, as it has many instruments to carry out that in Turkey and Syria," he said.

No cease-fire despite Moscow's claim

Russian news agencies, citing the Russian military, reported Wednesday that Ankara and Moscow have brokered a complete cease-fire in Idlib between the Syrian regime and opposition forces, which has been applied to the Idlib de-escalation zone and led to a significant reduction in violence. Yet, as the Assad regime's attack came hours after the announcement, Çavuşoğlu said it is not possible to say that there is a complete cease-fire in Idlib. "However, efforts continue in cooperation with Russia," he said.

Following the Cabinet meeting yesterday, Presidential Spokesperson İbrahim Kalın said that the developments in Idlib are quite concerning for Turkey. In the meeting, the security issues caused by the Syrian crisis were also reportedly being mentioned. "Russia has been informed about the regime's deliberate attempts to provoke Turkey and terminating the attacks in the region that are being conducted to gain more land. From now on, the necessary steps are being taken and are continuing," Kalın said.

Following eight months of calm provided by the Sochi deal, the regime has started to intensify its attacks since April 26 under the pretext of fighting Hayat Tahrir al-Sham (HTS) militants holed up in Idlib. The intermittent attacks and bombardments have killed, wounded and displaced many civilians. Residential areas have been destroyed by indiscriminate attacks, while numerous educational facilities, health facilities and residential areas collapsed or have become unusable after being targeted by bombs. The Britain-based Syrian Observatory for Human Rights (SOHR) said Monday that 25 civilians, including seven children, had been killed in recent strikes, with more than 360 civilians killed since the end of April.

Stressing that the regime's advance in Qalaat Madiq and Kafr Nabudah with Russia's backing has emerged as a major obstacle for a cease-fire, Görücü said the involvement of the Turkish-backed opposition force, the National Army, in clashes in Idlib has revealed that Ankara has attached importance to the situation in Idlib.

"The Assad regime's grave losses in military clashes continue. The regime's withdrawal from the areas it has captured by violating the Sochi deal would pave the way for a cease-fire in Idlib," he said.

Being the last opposition enclave, Idlib's prewar population of 1.5 million has swelled to around 3 million with new refugee waves after it was designated a "de-escalation zone" under the Astana agreement between Turkey, Russia and Iran in May 2017 to pave the way for a permanent political solution in Syria. Tens of thousands of Syrians trapped in other parts of the country were evacuated there under various cease-fire agreements. However, the latest attacks have prompted fears of a new refugee wave as international organizations have been warning against a new humanitarian crisis.

Last week, Najat Rochdi, a senior humanitarian adviser to the U.N. special envoy for Syria, said millions of civilians that took shelter in Idlib are under serious threat amid a looming catastrophe.

"We heard firsthand reporting from our U.N. colleagues based in the region about the increasingly horrific brutality in recent weeks by all parties involved in the de-escalation area in northwestern Syria, which has caused significant civilian causalities, and the displacement of hundreds of thousands of people. Three million people in Idlib need protection. A humanitarian catastrophe is a grave danger if the violence does not cease," he said.