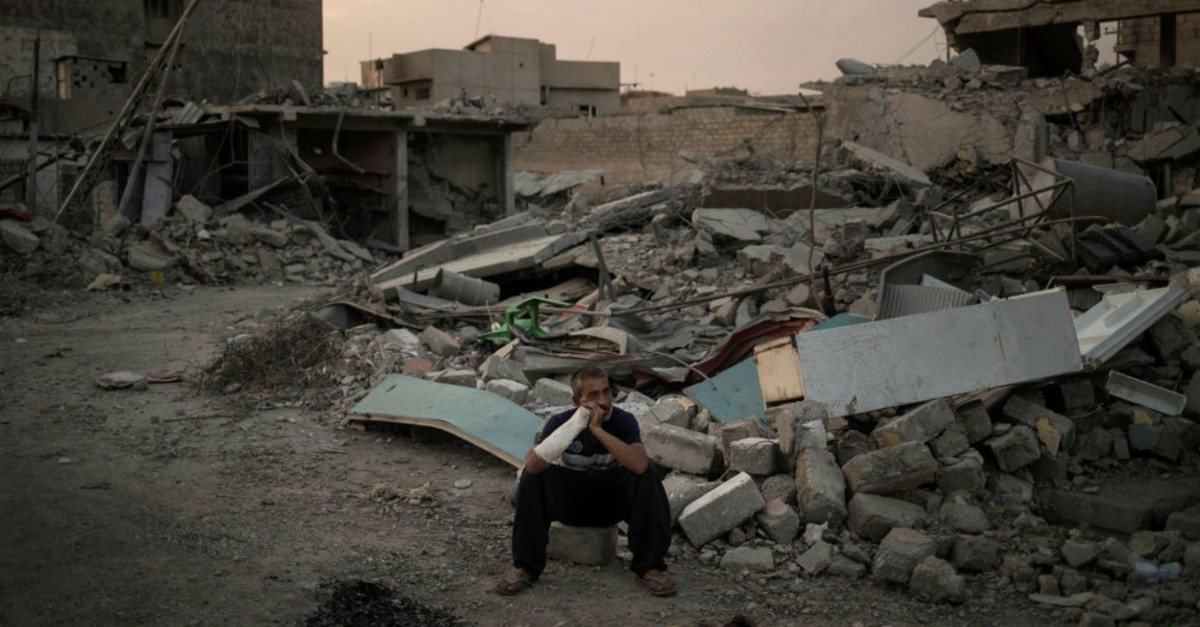 Nearly 150,000 Iraqi refugees living in Turkey are waiting for their hometowns to be reconstructed after Daesh's three-year-long reign of terror

"I feel that I have to do something for the people who once extended a helping hand to me," says Behchet Mahmoud, one of the tens of thousands of Iraqi Turkmens who fled to Turkey from Tal Afar and Mosul after their hometowns in Iraq were invaded by Daesh.

Almost every morning, he goes to the Turkish Red Crescent's (Kızılay) soup kitchen in Ankara's Altındağ district to help relief workers who distribute meals to those in need and returns home at the end of the day. It is not known exactly how many Iraqis fled western Iraq during Daesh's three-year-long reign of terror. The official numbers in 2018 suggested that nearly 150,000 Iraqis are living in different regions of Turkey. Even though it is relatively low compared to almost 4 million Syrian refugees in the country, the number swells to a couple of hundred thousand with unofficial immigrants.

Though two years have passed since the Iraqi military and paramilitary forces regained full control of occupied territories, only a small number of refugees have returned home as slow reconstruction efforts remain the main problem.

Forty-four-year-old Balqees, a mother of eight, the oldest of whom is 17, is one of the Iraqi refugees who want to return home to Tal Afar, a small city in northwestern Iraq, but complains of a lack of public services and rebuilding efforts.

"We had many free services before the U.S. invasion. Now, after a series of wars, there is nothing left in the country. No work, simply no progress in reconstruction. Living in another country is difficult but at least we sleep in peace," she said.

At the Kuwait International Conference for the Reconstruction of Iraq in February 2018, governments from around the world pledged loans and investments worth billions of dollars for the rebuilding of Iraq, a country reeling after a four-year-long war against Daesh.

Just as it has been doing in northwestern Syria, Turkey announced it will provide the necessary support for the reconstruction of Iraq, pledging a $5 billion loan and $50 million grants-in-aid at last year's conference, making it the top contributor.

This February, Ankara launched a coordination process to allocate the pledged funds. Foreign Minister Mevlüt Çavuşoğlu said Turkish businessmen will benefit from this loan package for the investments and trade financing necessary for the projects they will undertake in Iraq. The Turkish credits are categorized as soft loans, which refer to lower interest rates with longer repayment time.

Turkey's Ambassador to Baghdad Fatih Yıldız told Daily Sabah they have been conducting consultation meetings with Iraqi authorities to discuss where these loans can be used and certain high-priority projects were picked in four main areas: roads, airports, industrial zones and water management.

"The roads projects include renovating the 570-kilometer-long main highway, which starts from Turkey-Iraq border, from the proposed Ovaköy-Fishabur border gate and going through Mosul, Tikrit and down to Baghdad, also known as former Hajj [pilgrimage] road. Connecting Turkey and Iraq with a railroad is also our strategic target," the Turkish envoy said.

Officials in Baghdad say rebuilding Iraq is expected to cost nearly $90 billion. They have published a list of 157 projects, for which it sought private investments during the conference last year.

Stressing Ankara's second target was the reconstruction of Mosul and Kirkuk airports, Yıldız said the Turkish side told the Iraqi authorities that it can renovate the current structures or build from scratch.

The Mosul airport and its runways were seriously damaged during Daesh rule. Even though the Iraqi government launched a reconstruction program, it has been hampered by financial drawbacks in the country and still waiting to be completed.

"Our third project is the establishment of an industrial zone in Mosul with the contribution of the Union of Chambers and Commodity Exchanges of Turkey (TOBB). Turkey has tremendous experience in the area," the Turkish envoy said.

Ankara is also keen on investing in water projects, Yıldız said, adding that the Turkish side submitted its plans to the Iraqi government and consultations have continued in the highest level, involving respective presidents and foreign ministers.

"We are expecting to make some breakthrough in one or two of these projects after summer. President Erdoğan is expected to visit Baghdad for high-level strategic cooperation council meeting later this year," he said.

With its remarkable response to the humanitarian disasters in the region, Turkey has already become a country that has come up with an exceptional model for the reconstruction of Syria, which includes unique features in many facets, in comparison to other post-conflict areas in the world.

Compared to rebuilding works in post-conflict areas, such as Afghanistan and Iraq, Turkey's model functions quickly to make war-torn regions livable in terms of socio-economic and security aspects, despite the ongoing conflict.

Many refugees get going in Turkey

Even though most refugees wait for the right time to return home, some have also made a place for themselves in the Turkish society, as the temporary conjuncture turned out to be permanent due to endless clashes and a lack of stability.

Mahmoud is one of those refugees, who have started anew in Turkey.

"My daughter is married to a Turkish man. This has enhanced our relationship with this country. I have 10 years more before retirement, and this would be the only reason for me to return to Mosul if I decide to do so," he said.

According to Yavuz Coşkun, the director of Kızılay's soup kitchen in Altındağ, most of the refugees are unlikely to return home unless rebuilding efforts are stepped up.

"All wars have an end, so these will too. But their hopes for going back is fading away day by day," he said.

Coşkun, along with his team at the center that provides meals for about 6,000 refugees everyday regardless of their nationality, made extensive efforts to provide the refugees with not only meals but humanitarian aid as well.

"All of the refugees have different expectations, so we are trying to do our best. For example, Iraqi Turkmens rarely eat pasta. We are offering different options for them," he said.

Compared to parents, who have to carry the burden of their families in a foreign country, children are more likely to integrate. Maryam, a fifth-grade student at a public school in Ankara, is one such instance.

"I love my school and I want to be a doctor," says the Iraqi-Turkmen girl who lost her father in clashes in her hometown Tal Afar. After having her daily meal at the Kızılay center, she hurriedly said she had no time for more questions and needed to catch up on her classes.