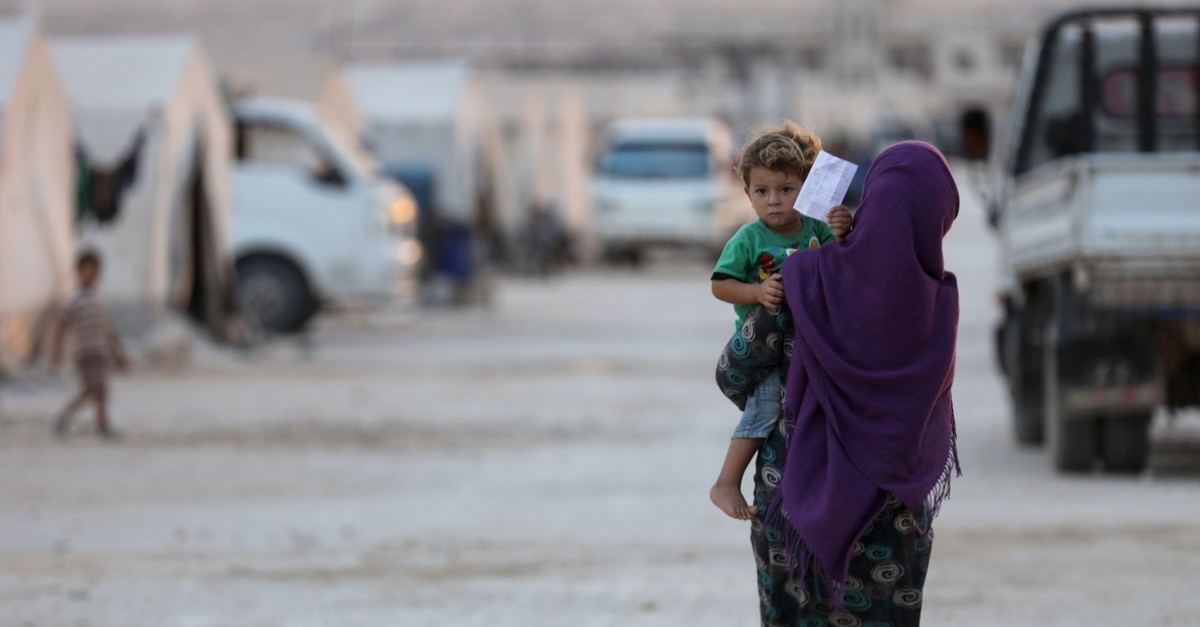 Recalling the inhumane torture she saw during her time in prison in Syria, Wafaa Najeeb says that despite everything, she is still hopeful for the future of her country

A woman formerly jailed by the Syrian regime continues to hold on to the hope of a free Syria, despite the human rights violations and abuse she was exposed to.

Pregnant with her third child, Wafaa Najeeb recalled the inhumane torture methods and cruelties she witnessed during her imprisonment in several detention centers in an interview with Anadolu Agency (AA).

Najeeb was first arrested in August 2012 at a Bashar Assad regime checkpoint in the Damascus countryside.

"During that time, I was working with aid organizations to help those migrating. The region I was living in was under siege during that time. Only civilians were able to enter and exit. I did not know I was on the Assad regime's wanted list," she said.

As Bashar Assad regime soldiers were pointing guns at her and the others in the vehicle they were in, Najeeb, together with the driver and a female friend, got out.

They were arrested without being informed of anything and brought to the Yarmouk police station, where Najeeb found out that she was suspected of carrying out a terrorist operation against the state, kidnapping, killing and wounding others. Her siblings had already been arrested months ago.

Almost 14,000 people have died in Syrian regime prisons since March 2011, when the civil war first erupted, while about 128,000 others still remain in detention, the U.K.-based Syrian Network for Human Rights (SNHR) said in a report released in March.

According to the report, some 127,916 people are currently in detention or have been forcibly disappeared over the same period. She was arrested by Bashar Assad regime soldiers in May 2018.

Najeeb's ordeal began that day, when she entered an interrogation room for the first time in her life.

Najeeb was later transferred to intelligence center 227 in the Kefer Susa region of the Syrian capital Damascus, where she remained for 65 days.

"Here we would be hit with chains every day," she said, in a tiny cell she shared with 10 others. Describing her stay there as the "most severe time," Najeeb discussed the cruel torture the inmates were exposed to.

"I can't forget those days. The smell of blood, people dying in front of me. They would shock [inmates] using electric chairs, pull out their nails," she said.

"What we've been through will affect us throughout our lives. Many people lose their memory. When I returned to my family, I didn't recognize my mother. I didn't remember anything," she said.

At the end of 65 days of intensive torture, Najeeb was transferred to intelligence center 215.

"There, I spent 75 days before I was transferred to Adra prison, one of the most well-known prisons in Syria," she said. "In Adra prison, there were the Assad regime commanders Samir and Hammadi, we - about 350 women, from young to old in the prison - would be very afraid of them. They would swear and beat and torture [us]," she said.

Noting there was no medical treatment in the prison, Najeeb said she also witnessed a woman dying of a heart attack as nobody intervened.

When she was finally released, her family did not support Najeeb, which is why she would stay with her friends.

"About two months after I was released, I met my husband and told him about my situation. He shared the same [political] views with me and was also against the Assad regime. We got married in August 2014," she said.

After eight months of marriage, Najeeb was pregnant and was on her way to the doctor, only to be arrested again.

"During the arrest, without even considering that I was pregnant, they beat and cursed me while threatening me to trigger an early birth," she said.

Following her second release from Adra prison, the family decided to escape the region, as they were afraid of further arrests.

"Taking my mother and my younger sibling with us, we were forced to migrate to northern Syria," she said, adding the journey was difficult.

Najeeb said that almost all the women entering the prison are abandoned by their families as re-entry into society is challenging.

"Many young women fell apart due to these arrests, and the arrests still continue. There are still women who have been in prison for eight years facing torture," she said.