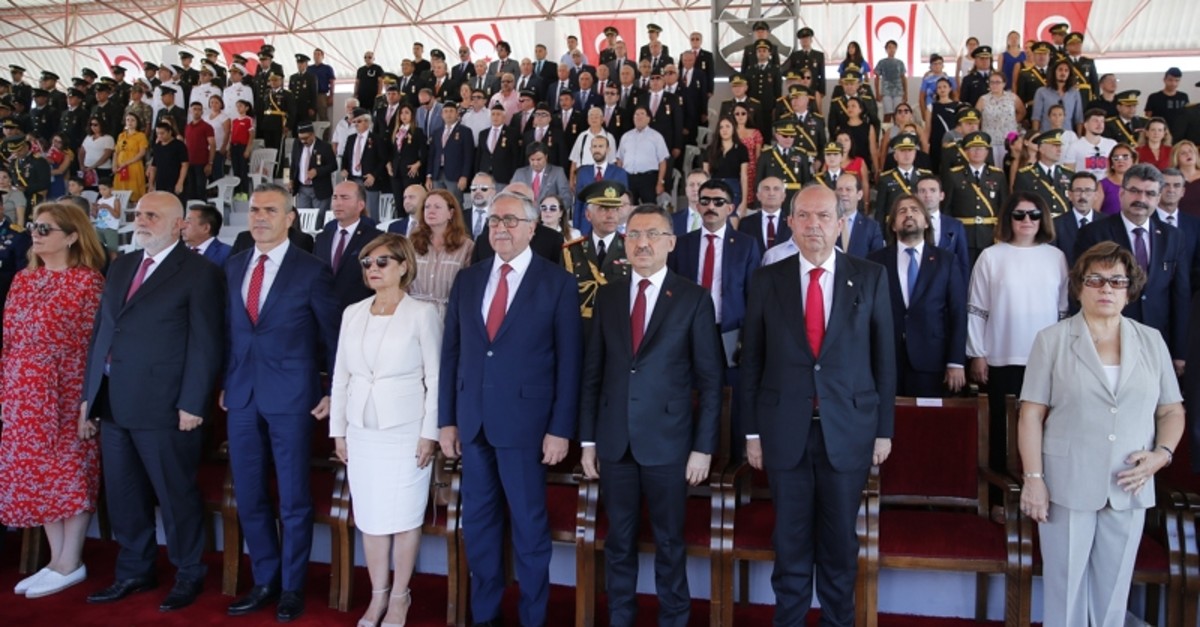 Officials attend the ceremony marking the 45th anniversary of the peace operation in Northern Cyprus on Saturday July 20, 2019 (AA Photo)
by Daily Sabah with AA Jul 21, 2019 12:28 am

The celebrations for the 45th anniversary of the Cyprus Peace Operation started to take place on Friday. As part of the celebrations, The National Defense Ministry released a video, detailing the incident with historical facts and visuals.

Sharing the video on its Twitter account, the ministry said, "We commemorate with mercy and gratitude all the martyrs and heroic veterans, who brought peace to Cyprus 45 years ago and eased the pain of our brothers."

The video starts with visuals that show the suffering of the Turkish Cypriots at the time and continues with the operation that was launched on July 20, 1974. Summarizing its peacekeeping mission, the video states: "For its 45th year, with the pride of being the insurance of never-ending unity, peace and stability," in its closing remarks. July 20 is celebrated by Turkish Cypriots as Peace and Freedom Day. Celebrations have started to take place in Northern Cyprus on Friday. As part of the celebrations for the anniversary, the veterans of the day came together in the country while the Turkish prime minister at the time, Bülent Ecevit, has also been commemorated in Nicosia.

Officials from Turkey, including Deputy Culture and Tourism Minister Serdar Çam, and from TRNC, including TRNC Prime Minister Ersin Tatar, attended the celebrations.

"[TRNC] continues both its development efforts and also its efforts to maintain permanent peace on the island in line with your [Ataturk's] principle of 'Peace at home, peace in the world'," Akıncı wrote on the memorial book.

"Turkish people and the Turkish Republic will always support, as they have been until today, Turkish Cypriots, as the equal owner of the island, who deserve to freely maintain their existence on the island and who are an integral part of our people," Oktay wrote on the memorial book.

Meanwhile, thousands of people attended a dawn vigil in Northern Cyprus to mark the 45th anniversary of the peace operation.

The TRNC Prime Minister Ersin Tatar and veterans of the 1974 peace operation along with huge numbers of people gathered at a beach in Northern Cyprus where Turkish forces entered the island on the day of the operation.

"We have gathered here to celebrate the freedom and peace that came at the dawn of July 20, and to commemorate those who died and suffered for this cause," Fevzi Tanpınar, the head of Dawn Vigil Organization Committee said during the event.

Presidential Spokesperson Ibrahim Kalın commemorated the anniversary in a twitter message, saying that Turkey will always stand by Turkish Cypriots and protect their "inalienable rights."

"On the 45th anniversary of the Cyprus Peace Operation, we remember our martyrs with gratitude and salute our veterans with honor," Kalın said.

July 20 Peace and Freedom Day in the Turkish Republic of Northern Cyprus commemorates Turkey's Cyprus Peace Operation -- a huge military intervention to protect Turkish Cypriots from the violence which struck the island in 1974.

The decades since have seen several attempts to resolve the dispute, all ending in failure. The latest one, held with the participation of the guarantor countries -- Turkey, Greece, and the U.K. -- ended in 2017 in Switzerland.

In 2004, in twin referendums, the plan of then U.N. Secretary-General Kofi Annan was accepted by Turkish Cypriots but rejected by Greek Cypriots.

Talks have focused on a federal model, based on the political equality of the Turkish and Greek Cypriot sides, but Greek Cypriots' rejection of such a solution, including the Annan plan, led to the emergence of other models.

In a recent report, current UN Secretary-General Antonio Guterres also said that "new ideas" may be needed for a settlement on the island.

The operation, which was Turkey's first military operation abroad in the Republican era, followed two-decades of intercommunal violence where Turkish Cypriots were targeted by Greek Cypriot pro-independence militia during the British colonial rule, and after independence, Turkish Cypriots were confined to enclaves starting from 1963 to protect themselves against Greek militia groups.

Cyprus has been divided since 1974, and the latest attempt to reunify the long-divided Mediterranean island ended in failure in 2017 after two years of negotiations.