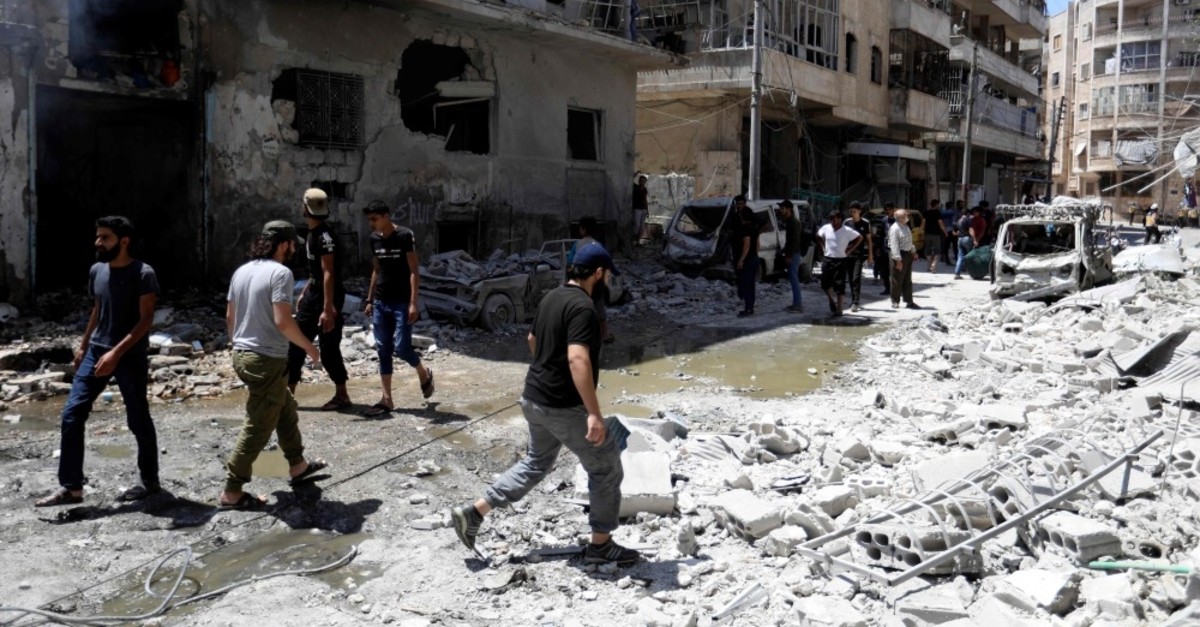 Thousands of civilians in northern Syria's de-escalation zone have fled to the safety of areas closer to the border with Turkey during the weekend, the U.N. said Monday. Farhan Haq, the spokesman for U.N. Secretary-General Antonio Guterres, said they are worried about the safety of nearly 3 million people stuck in the ongoing clashes in northwestern Syria. "Thousands of people have fled toward the border with Turkey last weekend," he added. Syrian opposition commanders and rights groups said on Monday that the Syrian regime and its Russian ally are stepping up aerial strikes on heavily populated cities, in a new and bloodier phase of a three-month-old assault on the last opposition stronghold in the northwest.

A sustained week-long aerial attack on cities in southern Idlib province has caused the most civilian casualties since Russian jets joined the Syrian regime forces on April 26 in the offensive to recapture the enclave.

"This is the heaviest bombing and loss of life since the start of the campaign," said Fadel Abdul Ghany, chairman of the Syrian Network for Human Rights (SNHR).

"They are taking revenge on our popular support that has stood by us," said Naji Mustafa, spokesman for the Turkey-backed National Liberation Front (NLF) coalition of opposition groups. He described the raids as "systematic terror by the Assad gangs and Russian forces."

Lastly, the death toll from attacks by regime forces and Russian warplanes in the de-escalation zone in northern Syria on Monday rose to 15, according to sources with the White Helmets civil defense agency.

According to local sources, five civilians were killed in the town of Kafr Zita and two others in Latmeen in the morning in the central Hama province.

During the attacks in the evening, eight more civilians including a civil defense official were killed.

Since the beginning of last week, at least 123 people were killed in ground and air attacks on the de-escalation zone.

The de-escalation zone is currently inhabited by about 4 million civilians, including hundreds of thousands of people displaced by regime forces from their cities and towns throughout the war-weary country over recent years.

Heightened bombardment by the regime and its allies has claimed the lives of more than 780 civilians in the region since the end of April, according to the Syrian Observatory.

Meanwhile, the U.N. dispatched 19 truckloads of humanitarian aid to Idlib yesterday. The trucks passed Turkey's Cilvegözu Border Gate in the southern Hatay province. The aid will be distributed to those in need in Idlib and its surrounding rural areas.

Opposition groups say the campaign has now shifted significantly toward cities and urban centers and away from mainly rural and sparsely populated towns and villages near the front line.

The heavy bombing of rural villages has so far displaced 440,000 people, who have headed to the safety of areas closer to the border with Turkey, the latest U.N. estimate shows.

U.N. officials and aid workers have said a humanitarian disaster could unfold if the strikes expand to Idlib city and other cities that have so far been spared sustained bombing.

A majority of the three to four million people who live in the opposition enclave are in these urban centers and aid workers say wider strikes bring the prospect of a major new refugee exodus along the border with Turkey.

Turkey, Russia and Iran declared Idlib and its surroundings as a de-escalation zone at the Astana meeting in May 2017. Amid the ongoing cease-fire violations by the regime, Turkey and Russia reached a further agreement in Sochi in 2018.

Following eight months of relative calm provided by the deal, the Syrian regime intensified its attacks on April 26 under the pretext of fighting Hayat Tahrir al-Sham (HTS) militants holed up in Idlib.

Together with Iran-backed terrorist groups and the Russian Air Force, the Bashar Assad regime has started to gain power in the region with far-reaching attacks on the Idlib de-escalation zone.

Meanwhile, Foreign Minister Mevlüt Çavuşoğlu spoke to Russia Today on Syria yesterday. Saying that critical issues will be handled at the Syria summit in the Kazakh capital Nursultan on Aug. 1 and 2, Çavuşoğlu said: "We must maintain calm and pay more attention to the political process. We will also negotiate the establishment of the Constitutional Committee. We are working together to declare the establishment of the committee."

Meanwhile, the speaker of the opposition delegation said yesterday that they will also attend the Nursultan talks.

"In order to defend our people, we will attend the Nursultan talks. We will bring our people's sorrow with us as well," said Yaser Abdurrahim.

"While our people are dying, unfortunately the international community keeps its silence," he said, accusing Russia for the escalation of violence in the region.

He also said that they will ask the international community to put pressure on Russia during the talks.