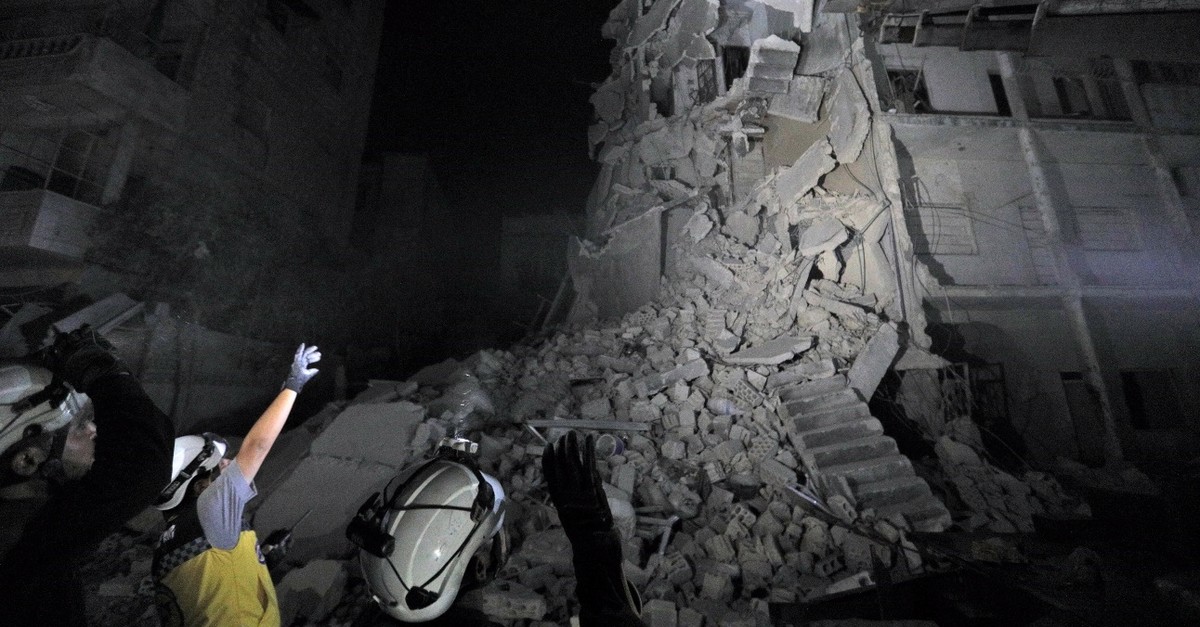 Members of the Syrian Civil Defence (White Helmets) search for victims as a building collapsed days after a reported air strike on the town of Ariha, in the south of Syriau2019s Idlib province, July 31, 2019.
by Daily Sabah Aug 02, 2019 12:30 am

The bombing and shelling of Syria's southern Idlib and northern Hama provinces, leaving hundreds of thousands of people dead, wounded and displaced, has further deteriorated what is already a critical situation. The Médecins Sans Frontières (MSF) medical and humanitarian nongovernmental organization (NGO) stated on Wednesday that people living in poor conditions face the risk of an epidemic.

"There are days when we have to go to the safe room multiple times because planes are flying overhead," a local hospital director said. "But no matter how many times we have to interrupt our work, we try to keep the emergency room open – we put all our efforts into this. Some hospitals in the area serve tens of thousands of people. We have no choice but to be there for them when something happens."

Multiple reports show countless hospitals being hit, schools being hit, bakeries being destroyed and whole villages being destroyed since the outbreak of the Syrian civil war in 2011 due to the attacks of the Bashar Assad regime. However, the situation was further aggravated in the last few months when the Syrian regime focused on the final piece of the puzzle that Assad seeks to conquer. Since the Syrian regime launched its offensive in Idlib in late April, more than 600 people have been killed and hundreds of thousands have been displaced, according to the Syrian Observatory for Human Rights. Human rights abuses in this war have been countless.

In recent weeks, medical facilities, civilian infrastructure, markets, schools, camps and streets have been constantly bombed and damaged, announced the Médecins Sans Frontières (MSF), adding that one MSF-supported hospital has also been attacked. "When planes fly over the hospital, people are extremely scared – some leave the building out of fear it will be hit," said the hospital director. The MSF further explained that sometimes they have to treat up to 50 people at the same time while working under difficult conditions in the de-escalation zone. "Earlier this month, an MSF-supported hospital received over 35 wounded from airstrikes in the space of just 48 hours."

The de-escalation zone is currently inhabited by about 4 million civilians, including hundreds of thousands of people displaced by regime forces from their cities and towns throughout the war-weary country over recent years. Most of the displaced people seek refuge in densely populated areas where they live in tents or out in the open without proper food, water and medical care. These unhygienic and overcrowded settlements pose a severe risk to health and pave the way for possible epidemics.

"If people do not have clean water to drink, we can expect more people with dehydration, diarrhea and waterborne diseases in the coming weeks," operations coordinator for MSF programmers in Syria Lorena Bilbao said. Even though the MSF and several other humanitarian aid organizations do their utmost to help these people, the efforts are not yet enough for the humanitarian crisis that has been going on for a long time in the area.

The effect on Syrian society has been catastrophic. The rising generation has known nothing but war and being displaced from one camp to another in appalling conditions. Turkey has taken more than 3 million Syrian refugees so far, and according to the U.N. Refugee Agency (UNHCR) is for the fifth consecutive year the country hosting the highest number of refugees. MSF also said that their support to facilities has been reinforced, while donating medication, first aid kits and surgical kits to hospitals. Since the Syrian government has not granted MSF authorization to operate in the country, they lack access and their presence is constrained. In areas where access was permitted, the MSF supports hospitals and medical facilities; however, when no direct access is granted, the hands of the MSF are tied by being only able to donate medical equipment or trained staff.

Meanwhile, Secretary-General Antonio Guterres is establishing an inquiry into a series of attacks on U.N.-supported facilities, including hospitals in northwestern Syria's Idlib province, his spokesman confirmed yesterday.

The creation of the U.N. inquiry board follows a letter from 10 members of the Security Council requesting Guterres launch the probe into Syrian regime and Russian airstrikes on hospitals in Idlib.

Ambassadors of the U.S., the U.K., France, Belgium, the Dominican Republic, Germany, Indonesia, Kuwait, Peru and Poland urged Guterres to specifically look into attacks on medical facilities and possible abuse of the U.N.'s conflict-reduction channel.

Russia, China and the council's nonpermanent African countries did not join in the appeal.