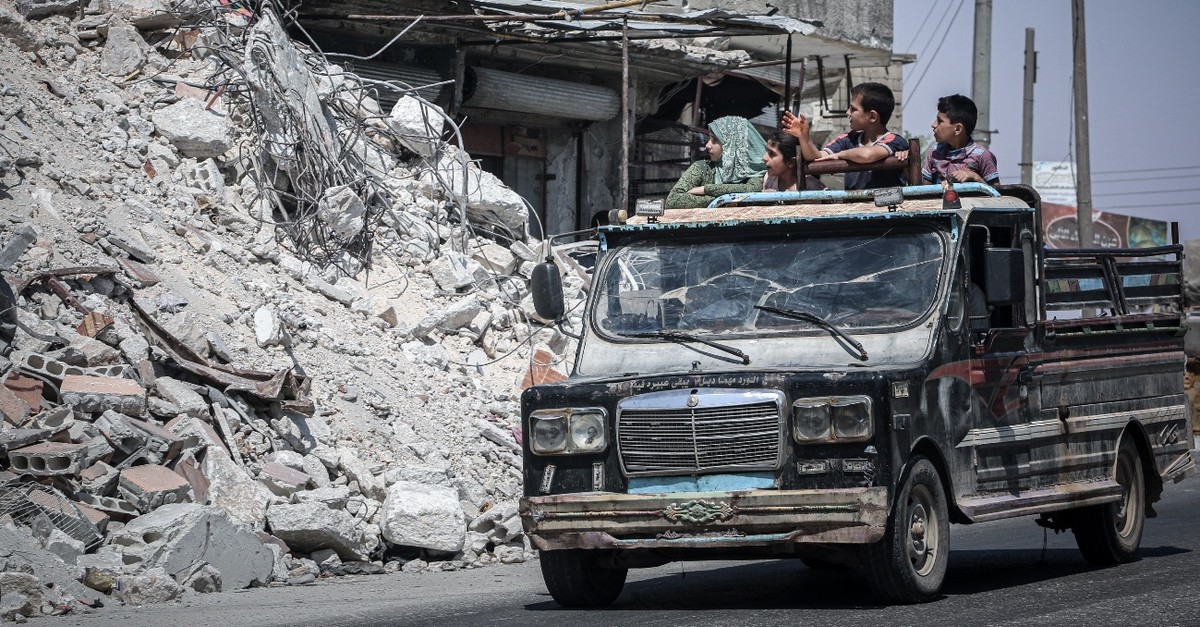 Thousands of civilians caught in Russia-backed Bashar Assad regime attacks on Idlib have left their homes for camps in Atmeh, Deir Hassan and Kafarlosin in the north of Idlib, along the Turkey-Syria border.
by Daily Sabah with AA Aug 17, 2019 12:13 am

Attacks by the Bashar Assad regime and Russia in northwestern Syria's Idlib continued during the Muslim religious festival of Qurban Bayram, also known as Eid al-Adha, causing around 124,000 civilians to flee toward camps along the Turkey-Syria border. Syrian regime forces captured five villages in the country's northwest early Wednesday, inching closer to the major opposition-controlled town Khan Sheikhun, which was the scene of a deadly 2017 chemical weapon attack, and forcing thousands to flee their homes to safer areas further north, opposition activists and state media have reported.

Mohamed Hallaj, director of the nongovernmental organization (NGO) Coordinators of Interventions in Syria, said around 124,000 civilians were displaced due to attacks on Qurban Bayram and that the civilians constituted 19,231 families who fled to camps Atmah, Kah, Deir Hassan and Kafr Lusin within Syria's borders across Hatay's Reyhanlı district.

The de-escalation zone is currently inhabited by about 4 million civilians, including hundreds of thousands of people displaced by regime forces from cities and towns throughout the war-weary country in recent years. Continuing by explaining that the majority headed for the regions cleared by Operation Euphrates Shield and Operation Olive Branch, Hallaj underlined that the threat of occupation in Khan Sheikhun and its surrounding area was also influential in the migration movement.

He stated that about 22,000 civilians had to migrate from Khan Sheikhun, 18,000 from the settlements to its east, about 32,000 from the villages Abu Makka and Um Jalal, about 15,000 from Kafranbil and its surroundings, about 7,000 from Tuh and its surroundings, 13,000 from Keferruma and around 10,000 Maarat al-Numan. Indicating that the camps are in need of more support, Hallaj warned that if the attacks spread to the provinces of Seraqib and Maarat al-Numan, the number of displaced might reach 1 million.

Even though Damascus declared a cease-fire in Idlib's de-escalation zone when Turkey, Russia and Iran, the three guarantors of the Astana peace process, met in the 13th meeting held in Nursultan, the capital of Kazakhstan, on Aug. 1 for technical talks before the trilateral Astana meeting, the attacks are still taking place. Since the Sochi agreement was inked last year, nearly 750,000 civilians have been displaced during violations of the cease-fire. The Response Coordination Group, a relief group active in northwestern Syria, said in a statement Wednesday that more than 40,000 people have fled their homes in areas close to the fighting since early Tuesday. It said many of those who fled are staying on roads or in open-air areas and called on local authorities to open public schools to host the displaced.

The first meeting of the Astana process was held in Turkey in January 2017 to bring all warring parties in the Syrian conflict to the table to facilitate U.N.-sponsored peace talks in Geneva. The Astana talks support the establishment of the U.N.-backed constitutional committee in Syria as a part in finding a political solution.

Last year, the Sochi agreement was reached on Sept. 17 by President Recep Tayyip Erdoğan and his Russian counterpart Vladimir Putin. According to the agreement, the cease-fire in the Idlib region will be preserved with the withdrawal of heavy arms and radicals from the region. However, even though the region of Idlib was declared a de-escalation zone, attacks by the Syrian regime and Russia have continued unceasingly against the last opposition stronghold, leading to deaths as well as the displacement of hundreds of thousands of people.

A recent report by the U.N. Office of the Deputy Regional Humanitarian Coordinator for the Syria Crisis revealed that more than 500 civilian deaths have been officially documented by the U.N. in Idlib and northern Hama over the past three-and-a-half months alone.

"Every day humanitarian and rescue workers risk their lives to help civilians trapped in this area, including women and children, the sick, the elderly and people with disabilities. They dig people out from under the rubble, rush wounded civilians to hospital, provide medical services and help those fleeing the area. But no one is safe. On the contrary, those who are risking everything to help some of the most vulnerable people in the world are themselves coming under attack," the statement added.

It also reported that since the end of April, there have been at least 42 attacks on health care facilities reported, affecting 36 hospitals and seven ambulances. In total, at least 17 health workers and patients have been killed.