Syrian regime shouldn't play with fire, civilians must be protected 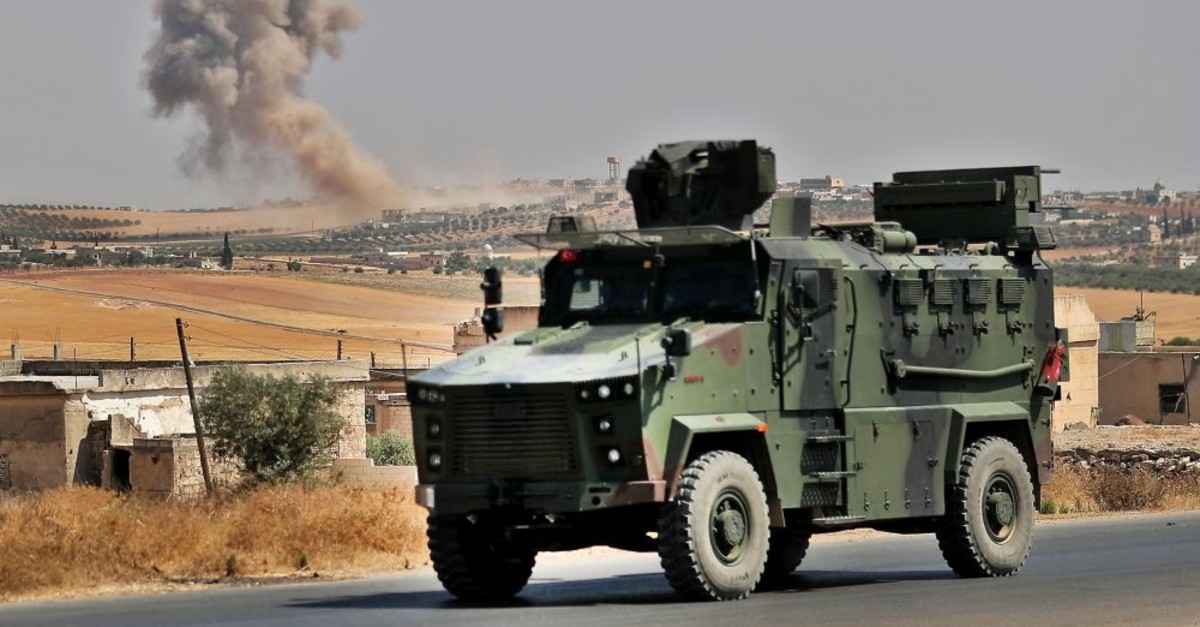 A day after an airstrike on a Turkish military convoy killed three civilians and injured 12 others in northwestern Syria, Foreign Minister Mevlüt Çavuşoğlu Tuesday warned the Syrian regime against taking any reckless action. "The regime needs to not play with fire. We will do whatever it takes to ensure the security of our soldiers and observation posts," Çavuşoğlu told a press conference in the capital Ankara. But, he added, "We hope it does not reach that point."

The fragile cease-fire in northwestern Syria's Idlib is on the verge of crumbling due to the continuous attacks by the Bashar Assad regime and Russia on residential areas, which have caused the deaths of hundreds of civilians and displaced around 400,000 people. Pushing intense diplomatic efforts since the beginning to give a chance to a political solution and thereby prevent a new humanitarian crisis, Ankara reiterated its call to maintain stability in the region but also warned the regime to refrain from any kind of aggression against Turkish troops. "We are explaining to the world that these kinds of attacks will only lead to disaster.

Idlib has a critical place in Syria's future," Foreign Minister Mevlüt Çavuşoğlu said yesterday at a press conference after his meeting with Salvadoran Foreign Minister Alexandra Hill in Ankara. A Turkish military convoy heading for observation points near the key town of Khan Sheikhoun in Idlib, where Assad regime forces are fiercely battling opposition groups, was hit by regime forces backed by the Russian military Monday. Three civilians were killed, and 12 others injured in the attack. The ministry strongly condemned the airstrike, saying it "violates existing agreements, cooperation and dialogue with Russia" and underlined that necessary measures should be taken to prevent the recurrence of such incidents.

Stressing that Turkey has no intention of carrying its ninth observation point in southern Idlib to another position, which is reportedly surrounded by regime forces, Çavuşoğlu said Ankara has kept communication channels with Moscow open to discuss the recent developments.

Despite eight months of calm provided by the Sochi deal between Turkey and Russia last September, the Assad regime, backed by Moscow, intensified its attacks starting April 26 under the pretext of fighting Hayat Tahrir al-Sham (HTS) terrorists holed up in Idlib. Since then, the situation has gotten even worse, taking the lives of innumerable civilians. Residential areas have been destroyed by indiscriminate attacks, while numerous educational facilities, health facilities and residential areas have collapsed or have become unusable after being targeted by bombs.

The Idlib de-escalation zone is currently inhabited by about 4 million civilians, including hundreds of thousands of people displaced by regime forces from cities and towns throughout the war-weary country in recent years.

The U.S. called on the Syrian regime and its allied forces late Monday to immediately halt all hostilities in Idlib by condemning an airstrike on the Turkish convoy.

"The [Bashar] Assad regime and its allies must return to the cease-fire in #Idlib now," State Department spokeswoman Morgan Ortagus said on Twitter.

"Today's reckless airstrike on a Turkish convoy follows ongoing vicious attacks against civilians, humanitarian workers and infrastructure. We condemn this violence and it must end."

For one week, regime forces have been advancing toward the town of Khan Sheikhoun from the outskirts of Hama, which is located in southern Idlib, and have captured Tari and Sukeik hills, the town of Hobait and the al-Faqir checkpoint, which is regarded as the western entrance to Khan Sheikhoun. The new developments put regime troops about 500 meters from Khan Sheikhoun's center, also enabling it to cut off the M-5 highway between Aleppo and Damascus.

Amid heavy bombardment and the regime advance, the Turkish military sent reinforcements to the ninth and 10th observation points in Khan Sheikhoun. The town was the scene of a chemical attack on April 4, 2017 that killed 89 people. At the time, the United States, Britain and France pointed a finger at the Syrian regime, saying their experts had found that nerve agents were used in the attack. Days later, the U.S. fired 59 Tomahawk missiles at Shayrat Air Base in central Syria on President Donald Trump's orders, saying the attack on Khan Sheikhoun was launched from the base.

France's president urged the full implementation of the Sochi de-escalation agreement in northwestern Syria on Monday, when more civilians were killed by airstrikes in Idlib.

"Today we are very concerned about what is happening in Idlib. Today the population of Idlib lives unde​r constant bombardment, civilians, and children die," Emmanuel Macron told a press conference Monday ahead of a meeting with Russian President Vladimir Putin in Bregancon, France.

"And I think that the situation is rather urgent, and it is necessary to implement the memorandum on the cease-fire, signed in Sochi, till the end," he added. Six more civilians were killed in a regime airstrike in the de-escalation zone on Monday, according to the White Helmets civil defense agency.

Three people were killed in the town of Maarat Al-Numan and three in the town of Hesh, Mustafa Haj Youssef, director of the White Helmets in Idlib, told Anadolu Agency (AA).

The talks with Putin will focus on the regional crises in Ukraine and Syria as well as the situation around the Iran nuclear deal, said Macron.

On Syria, Macron stressed the necessity to continue humanitarian initiatives "worked out in Istanbul and St. Petersburg."

Regime troops have been on the offensive against main opposition strongholds in Hama and Idlib since late April with the support of Russian air units.

The three-month campaign of airstrikes and shelling has killed more than 2,000 people on both sides, mostly civilians in Idlib were killed by the regime and Russian airstrikes and it also caused the displacement of almost 400,000 people. The United Nations says dozens of health centers and schools have been targeted. The refugee wave from Idlib toward the Turkish border, which was triggered by the regime advance, continued this week as thousands more left their homes. Speaking to AA, Mohammed Hallac, president of the Syria Intervention Coordinators, said Khan Sheikhoun is completely devastated by regime attacks targeting civilian areas since February. "Eight schools, three medical centers, a civil defense center and three bakeries have been targeted in regime and Russian airstrikes," he said. Hallac added that Khan Sheikhoun's population, which was nearly 100,000 before the offensive, has currently dwindled to almost zero.

Meanwhile, opposition groups started to partially withdraw from the town of Khan Sheikhoun in southern Idlib province and from their last remaining territory in neighboring Hama province after regime troops advances in the area, the Syrian Observatory for Human Rights and local activists said yesterday.

Syrian regime forces advanced into Khan Sheikhoun on Monday. The town had been in opposition hands since 2014. The opposition's territorial foothold in neighboring Hama province dates back to the earliest days of the eight-year-long conflict.

Khan Sheikhoun was targeted in a sarin gas attack in 2017 that prompted U.S. missile strikes against Syria.

An investigation conducted by the United Nations and the Organization for the Prohibition of Chemical Weapons (OPCW) said the Syrian regime was responsible for releasing sarin on the town on April 4, 2017. Damascus denies using such weapons.

Russian-backed Syrian regime advances around Khan Sheihkoun had threatened to encircle opposition fighters in their last remaining territory in northern Hama, including the towns of Latamneh and Kafr Zeita.

A statement yesterday from HTS said its move yesterday was "a redeployment" and that its fighters withdrew to the southern part of the town of Khan Sheikhoun from where they would continue to defend their territory.