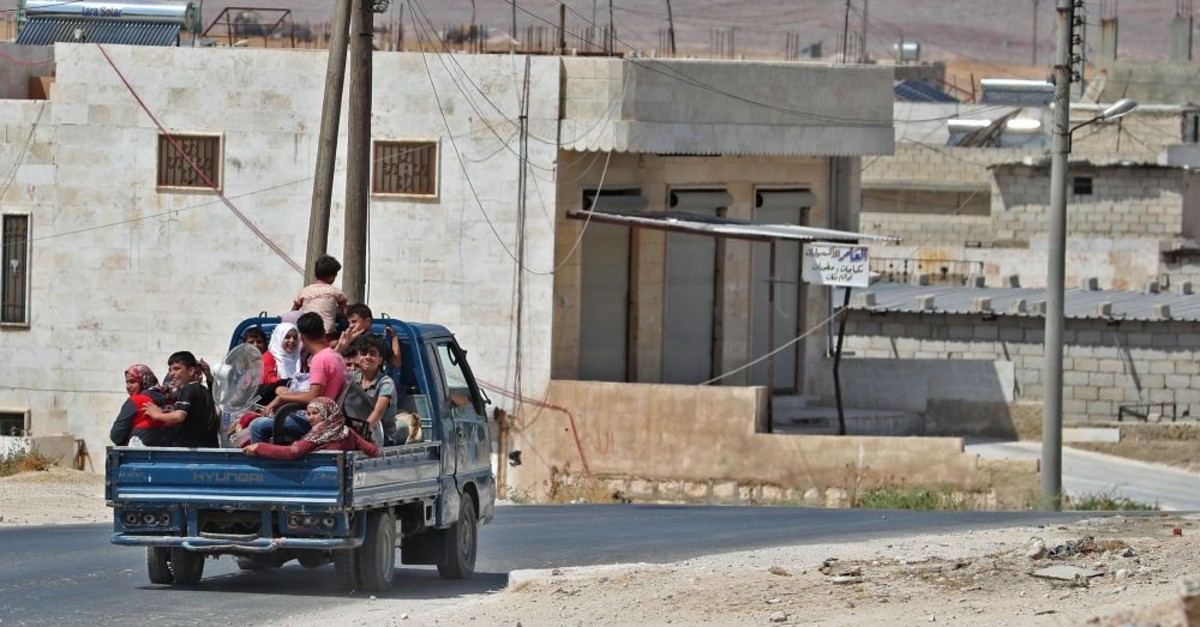 As the new flow of refugees fleeing war-torn Idlib starts to approach its borders, Ankara has rolled up its sleeves to face the crisis, building new shelters in the region

Ankara has completed preparations to handle about 150,000 Syrian refugees who fled from northwestern Syria's Idlib amid heavy airstrikes by the Bashar Assad regime and Russia that devastated the southern towns of the province. "After the latest developments, most of the displaced families migrated to their relatives in northern parts of Idlib, while some arrived at the Atmeh camp, and started to live together. We are building new tents to prevent packed living conditions by providing a living room for each family, along with catering to urgent humanitarian needs," Turkish Red Crescent (Kızılay) officials, who are handling the issue, told Daily Sabah Thursday.

Despite eight months of calm provided by the Sochi deal between Turkey and Russia in September, the regime, backed by Moscow, intensified its attacks starting April 26 under the pretext of fighting Hayat Tahrir al-Sham (HTS) terrorists holed up in Idlib. Since then, the situation has gotten even worse, taking the lives of innumerable civilians. Residential areas have been destroyed by indiscriminate attacks, while numerous educational facilities, health facilities and residential areas have collapsed or have become unusable after being targeted by bombs. While clashes are ongoing in southern towns, it is expected that people will flock to the Turkish border in case attacks move toward northern parts of Idlib.

"We are reinforcing our material and personnel supplies near border towns in case of a new refugee wave in a greater extent. We wish attacks against civilians will stop and to abide international humanitarian laws," Kızılay officials added.

International organizations also warned against a new humanitarian crisis in Idlib if the attacks of the Syrian regime and Russia continue. ''The secretary-general said that he is deeply troubled by the continued escalation in northwest Syria and the prospect of an offensive deeper into Idlib, which could trigger a new wave of human suffering possibly impacting more than 3 million people," Stephane Dujarric, spokesman for Secretary-General Antonio Guterres, said at a press conference late Wednesday. The Sochi agreement, which was welcomed by the international community and considered a diplomatic success to maintain de-escalation in the region, was negotiated between President Recep Tayyip Erdoğan and Russian President Vladimir Putin in September 2018. The two countries were able to agree on the establishment of de-escalation zones reaching 15-20 kilometers, with Russia taking responsibility from preventing the Assad regime carrying out offensives, while Turkey being reassured that radical groups in the said de-escalation zones would be displaced by mid-October 2018.

Dujarric reiterated Guterres' call for the September 2018 Memorandum of Understanding on Idlib to be upheld, referring to a cease-fire deal reached between Turkey and Russia.

Despite calls, the regime did not cease its large-scale offensive in Idlib. According to U.K.-based war monitoring group the Syrian Observatory for Human Rights, Bashar Assad's forces on Wednesday captured southern Idlib's Khan Sheikhoun town following two days of intense fighting with the opposition.

Syrian regime forces advanced into Khan Sheikhoun with the help of Russian airstrikes on Monday. The town had been in opposition hands since 2014. The opposition's territorial foothold in neighboring Hama province dates back to the earliest days of the eight-year-long conflict.

Also, six civilians have been killed in attacks by the regime and Russia yesterday, monitoring groups reported.

Russian Foreign Ministry Spokeswoman Maria Zakharova said yesterday that Russia will abide by all agreements with Turkey, including the Sochi deal, while continuing its fight against "terrorism" in Idlib. She added that Moscow will keep all channels for dialogue with Ankara open.

Meanwhile, Syrian regime media outlet SANA reported yesterday that Assad forces have opened a corridor in the country's northwest for people who want to cross out of opposition territory to army lines. Regime officials said the corridor would allow civilians to leave the southern part of Idlib province and the north of Hama, where the army has advanced against opposition groups through the use of fierce air and ground attacks.