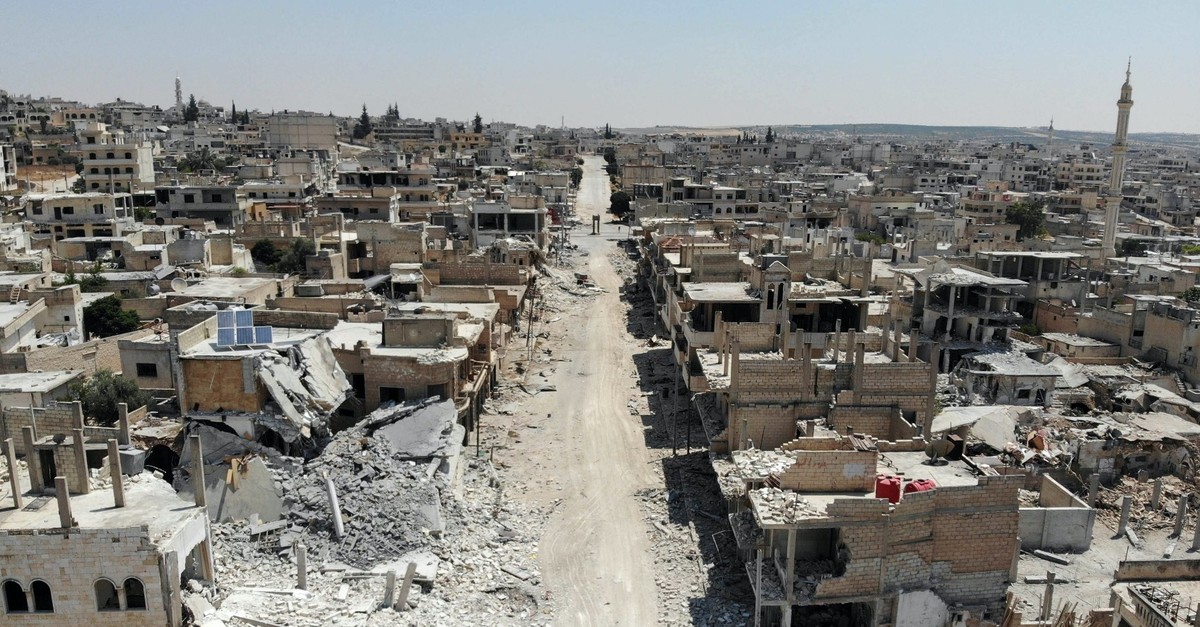 Destroyed buildings by the Syrian regime attacks in the town of Khan Sheikhun in the southern countryside of the northwestern Idlib province, Aug. 21, 2019.
by Daily Sabah with Agencies Aug 24, 2019 12:02 am

Speaking to Russian President Vladimir Putin in a phone call, President Erdoğan expressed Turkey's concerns over regime attacks in Idlib, underlining the threat of a new humanitarian crisis and matters of national security

Erdoğan and his Russian counterpart Vladimir Putin discussed in a phone call Friday the recent developments in Syria and Libya.

According to a statement by the Turkish Presidency, Erdoğan told Putin that the Bashar Assad regime attacks and violations of de-escalation deal in Idlib were causing a major humanitarian crisis and posed a "very serious" threat to Turkey's national security. Another statement by the Kremlin said both presidents agreed to "activate mutual efforts with the goal of liquidating the terrorist threat" in Idlib. Bashar Assad regime forces on Wednesday captured southern Idlib's town of Khan Sheikhoun following two days of intense fighting with the opposition.

The latest Syrian regime offensive in the northwest has also forced hundreds of thousands of people to flee toward the Turkish border. Meanwhile, forces loyal to the regime of Bashar Assad seized a pocket of territory in northwestern Syria from opposition fighters who had held the towns since the early years of the war, the state-run Syrian Arab News Agency (SANA) said Friday. According to the regime, its troops have seized the villages of Latamneh, Latmeen, Kfar Zeita and Lahaya, as well as the village of Morek, where Turkey maintains an observation post. The Assad forces have pushed deep into the small cluster of towns and their environs in the Hama countryside, encircling opposition forces and Turkey's No. 9 observation point, state media and a monitor said.

Idlib, located near the Turkish border, is the last major opposition-controlled province in Syria. A regime offensive in the area has killed hundreds and led to the displacement of close to 450,000.

Turkey and Russia agreed last September to turn Idlib into a de-escalation zone where acts of aggression are expressly prohibited. The Syrian regime and its allies, however, have consistently broken the terms of the cease-fire, launching frequent attacks inside the area. The de-escalation zone is currently inhabited by 4 million civilians, including hundreds of thousands displaced by regime forces from cities and towns throughout the war-weary country.

It was also reported that President Erdoğan will go to the Russian capital Moscow on Tuesday to meet with Putin.

Over 340,000 Syrians return home from Turkey

Speaking to reporters in the Lebanese capital Beirut, where he is paying an official visit, Foreign Minister Mevlüt Çavuşoğlu touched on the voluntary return of Syrian refugees to their country.

Hundreds of thousands of Syrians have gone home to parts of Syria cleared of terrorist groups by cross-border Turkish military operations, Çavuşoğlu said on Friday.

"More than 346,000 Syrians have returned to areas of Syria that were cleared of terrorists in Operations Euphrates Shield and

He said Turkey can share its experience with Lebanon on how to provide security to Syrian refugees when they return to their motherland.

Turkey hosts some 3.6 million Syrian refugees, more than any country in the world. Lebanon, with 1.5 million, is second. Since 2016, Turkey's Euphrates Shield and Olive Branch operations in northern Syria have liberated regions including al-Bab, Afrin and Azaz from PKK-linked People's Protection Units (YPG) and Daesh terrorists, making it possible for Syrians who fled the violence there to return home.

Çavuşoğlu also said the observation point was not under threat and that no force could take Turkish soldiers hostage.

Turkish officials previously said relocation or closure of the ninth observation post was "out of the question" and that it would be reinforced instead.

"We do not want to face the same picture we faced in Manbij or somewhere else. The situation in Idlib is obvious. A zone to provide the return of Syrians to their own country and to contribute to the end of clashes should be est

ablished. We will follow the practice in the following process," he added.

Germany on Friday expressed concern over recent airstrikes by the Syrian regime and Russia in northwestern Syria.

Speaking at a news conference in Ber

lin, Foreign Ministry deputy spokesman Rainer Breul said Germany was "very concerned" by the escalation of tensions and the deepening of the humanitarian crisis in the Idlib de-escalation zone. He confirmed a report by German news agency DPA that revealed at least six medical facilities funded by Germany were targeted in airstrikes in recent months. Besides for these health care facilities, 12 medical centers and four ambulances of the White Helmets civil defense agency, which is financially supported by Germany, were deliberately targeted in the airstrikes, DPA reported. Breul underlined that that number of displaced persons in Idlib since last April has reached to 590,000, raising serious concerns about a new humanitarian emergency amid recent attacks by the regime and its allies.