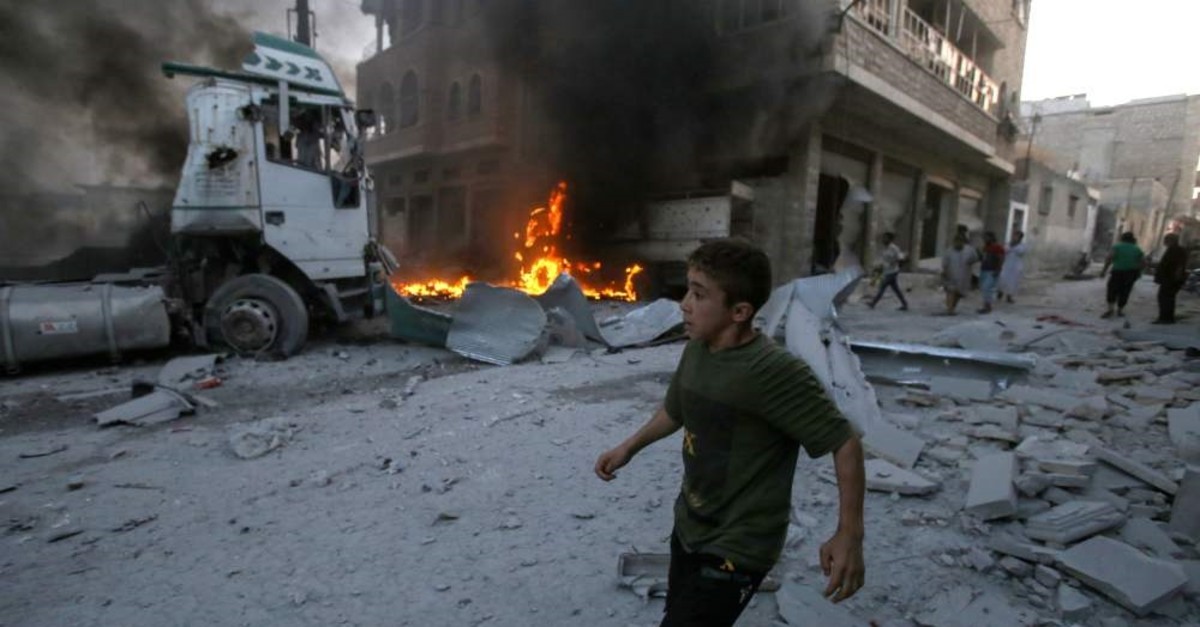 A young boy runs past a fire in a building following a reported airstrike by Syrian regime forces in the town of Maaret al-Numan in Syria's northwestern Idlib province, Aug. 28, 2019.
by Daily Sabah with Agencies Aug 31, 2019 12:25 am

As regime attacks in northwestern Syria's Idlib drag the region deeper into a humanitarian crisis, President Erdoğan expressed Turkey's concerns and described the situation as 'unacceptable'

The situation in Idlib is unacceptable and peacekeeping efforts are still unsatisfactory, President Recep Tayyip Erdoğan expressed yesterday, as relentless attacks by the Syrian regime have caused civilian deaths and displacement, posing the risk of another refugee wave and humanitarian disaster.

Speaking after the Friday prayer in the capital Ankara, Erdoğan said: "Developments in Idlib are unacceptable, Syrian migrants are now pushing north trying to enter Turkey." The president also said peacekeeping efforts in Idlib, where Turkey has security forces, were "not at a desired level."

"There has been harassment [fire] against our monitoring towers, number 9 and 10, in Idlib. Necessary warnings have been made [to Russia] following our meeting with Mr. Putin," he added.

Meanwhile, speaking to reporters in Norway as part of a two-day official visit, Foreign Minister Mevlüt Çavuşoğlu said on Friday that Russia had given Turkey assurances that the Bashar Assad regime would not attack Turkish observation posts in Idlib.

However, Russia has frequently overlooked the agreements it made with Turkey to establish a de-escalation zone and avoid civilian deaths.

"Continued attacks by the Assad regime in Idlib in northwest Syria could unleash another wave of Syrian refugees to Europe," Çavuşoğlu also warned.

After his meeting at the Norwegian Institute of International Affairs (NUPI), Çavuşoğlu stated: "If the attacks of the regime continue, a new humanitarian crisis will emerge and could be even worse than Aleppo. The international community is still silent in the face of these developments. If they do not act, this situation will have direct consequences on Europe's security."

Even though the Sochi agreement was signed between Turkey and Russia on Sept. 17, 2018, with the aim of establishing peace and stability, 945,992 civilians were displaced while 1,282 lost their lives, including many children and women, due to regime and Russian attacks. Furthermore, there is no end in sight of the attacks, risking a much greater refugee wave and number of civilian deaths.

The Syrian Opposition and the Revolutionary Forces (SMDK) announced on Thursday in a written statement that forces in the international community had the power to stop these attacks and crimes against humanity immediately, urging primarily the U.N. and other countries to step in.

"Once again we underline that the attacks on civilians of the Assad regime, Russia and Iran are crimes of war and the world has to take action," the SMDK stated.

Meanwhile, the Information Management Unit (IMU), a research unit, issued a flash report under the name "Field Developments in Idlib and Northern Hama Countryside during the Period between March 1 until August 24 2019," bringing to light the troubling state of the regions that are under constant attacks. According to the report, bombings targeted 142 facilities, 262 children and 180 women lost their lives due to shelling, and 71,046 people were living in the open or in camps with poor conditions as of Aug. 24.

"All actors concerned in Syria should move from mere condemnation and denouncement statements to actual steps to halt the regime and its allies' advance in Idlib governorate and put an end to daily massacres against civilians. It should also be reiterated that Idlib's governorate contains more than 3.5 million people, the bulk of which were individuals who were forcibly displaced and cannot return to their cities or towns under the present regime. Hence, the regime's domination of Idlib's governorate will turn those IDPs [internally displaced people] into migrants in neighboring or European countries," the report said.

The U.N. Security Council is considering a draft resolution that would call for a truce in northwestern Syria "to avoid a further deterioration of the already catastrophic humanitarian situation," although diplomats said on Thursday that such a move is likely to face opposition from veto-powered Russia.

Assad's forces, backed by Russian air power, have been waging an offensive in the Idlib region, the last remaining opposition-held territory in Syria's war, under the pretext of fighting terrorists in the region.

Kuwait, Germany and Belgium circulated a draft resolution, seen by Reuters, to the 15-member U.N. Security Council late Wednesday that would express "outrage at the unacceptable levels of violence escalating in and around Idlib." It was not immediately clear when they aimed to put it to a vote.

"Three million people, two-thirds of them women and children, are counting on your support to make this violence stop," U.N. aid chief Mark Lowcock told the Security Council on Thursday.

The United Nations said since the start of hostilities in northwest Syria in April, more than 550 civilians have been killed and some 400,000 people displaced. Almost half of the displaced people are living in open-air areas or under trees.

Senior British diplomat Stephen Hickey, speaking at his last Security Council meeting, said that despite best efforts the council had failed the people of Syria. He noted Russia's 12 vetoes of resolutions to shield the Assad regime during the more than eight-year-long conflict.

"We must now come together urgently to stop the violence in Idlib and to protect Syrians from further suffering," he said.

U.N Secretary-General Antonio Guterres announced earlier this month that the world body would investigate attacks on U.N.-supported facilities and other humanitarian sites in northwest Syria. Russia and the Assad regime have said their forces are not targeting civilians or civilian infrastructure.

The locations of the U.N.-supported facilities and other humanitarian sites like hospitals and health centers had been shared with the warring parties in a bid to protect them. However, the United Nations has questioned whether it made them a target.

"The rules are clear," Lowcock said. "People's homes, hospitals, schools, water systems and markets must be protected. There can be no reason, rationale, excuse or justification for the destruction of civilian areas on the scale seen in Idlib."

While the world was expressing its concerns over developments in the region, Russia on Friday announced that Syrian regime forces are declaring a cease-fire in Idlib starting Saturday morning.

An agreement was reached on a unilateral cease-fire by Syrian regime forces in the Idlib de-escalation zone, starting 6 a.m. on Aug. 31, the Russian Reconciliation Center for Syria said in a statement.

The statement said the cease-fire aimed "to stabilize the situation" in Idlib and urged anti-regime fighters to "abandon armed provocations and join the peace process."