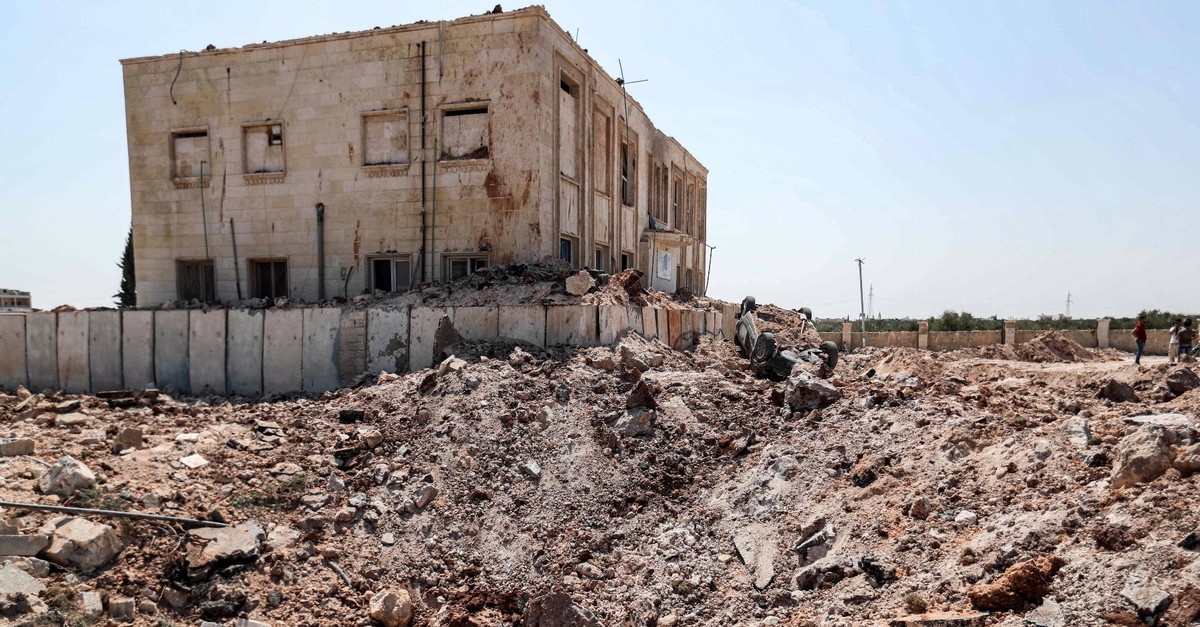 A health facility was hit by a reported regime airstrike after midnight in the town of Urum al-Kubra in the western countryside of Syriau2019s Aleppo province, despite a unilaterally announced cease-fire, Aug. 31, 2019.
by Daily Sabah with Agencies Sep 02, 2019 12:08 am

The dreadful conditions in Idlib, Syria seem to have no end with recurrent attacks by the Bashar Assad regime on civilian settlements, even though a cease-fire was announced on Saturday in order to establish calm in the region. Extensive mortar and ballistic missile attacks were carried out by the regime, damaging a school and leaving a hospital out of service. Although the Russian Defense Ministry announced on Friday afternoon that the regime declared a unilateral cease-fire in the de-escalation zone to be effective after 6 a.m. on Saturday, regime forces conducted heavy bombardment on southern Idlib's districts and villages including Kafrenbil, Has and Cercenaz.

According to the Syrian Observatory for Human Rights (SOHR), a U.K.-based war monitoring group, the bombardment of the town of Kafranbel late in the day left one civilian dead, just hours after the truce came into effect.

The announcement came one day after Mark Lowcock, the U.N.'s emergency relief coordinator, called on the U.N. Security Council to take meaningful action to protect civilians in Idlib.

"Three million people – two-thirds of them women and children – are counting on your support to make this violence stop," Mr Lowcock said on Thursday.

It was the second such truce declared since August, a cease-fire at the beginning of the month collapsed three days in, after which the Russian-backed regime pressed its offensive and gained ground. This time, again, the Moscow-backed cease-fire was not long lived.

Meanwhile, as renewed regime attacks killed one civilian, constituting the first violation of the truce, the U.S. carried also out airstrikes on the region against opposition groups, leaving at least 40 dead. The U.S. Defense Department said its own attack targeted al-Qaida leaders in the north of the same province, but did not say what kind of weapon was used.

The U.S. missile attack "targeted a meeting held by the leaders of Hurras al-Deen, Ansar al-Tawhid and other allied groups inside a training camp," said Rami Abdel Rahman, head of the Syrian Observatory for Human Rights. The U.S. Central Command (CENTCOM) said in a statement that this act was against those militants that were "responsible for attacks threatening U.S. citizens, our partners and innocent civilians."

Airstrikes by Damascus and Russia have killed more than 950 civilians since the end of April, according to the Observatory. The U.N. said a full-blown offensive against the Idlib region would result in one of the worst humanitarian "nightmares" in Syria's eight-year war. All these developments occur despite an agreement that was reached to establish stability and peace in the region while avoiding further human tragedy and refugee flows.

The aforementioned Sochi agreement was reached on Sept. 17 by President Recep Tayyip Erdoğan and his Russian counterpart Vladimir Putin. According to the agreement the cease-fire in the Idlib region was to be preserved, with the withdrawal of heavy arms and radicals from the region.

Following eight months of calm provided by the Sochi deal, the regime has intensified its attacks since April 26 under the pretext of fighting Hayat Tahrir al-Sham (HTS) militants holed up in Idlib. The intermittent attacks and bombardments have killed, wounded and displaced thousands. Residential areas have been destroyed by indiscriminate attacks, while numerous educational facilities, health facilities and residential areas have collapsed or have become unusable after being targeted by bombs.

The Russian Defense Ministry said the United States had warned neither Russia nor Turkey about the strikes.

The Syrian Observatory for Human Rights said airstrikes pounded bases belonging to opposition fighters in Syria's northwest. The U.K.-based monitor said the strikes, near the town of Maarat Misrin in Idlib province, killed more than 40 militants, including some commanders.

Interfax news agency cited Russian military sources as saying that the United States carried out airstrikes in the region between Maarat Misrin and Kafer Haya in Idlib on Saturday.

U.S. airstrikes have hit a number of Nusra Front commanders in northwest Syria in recent years.