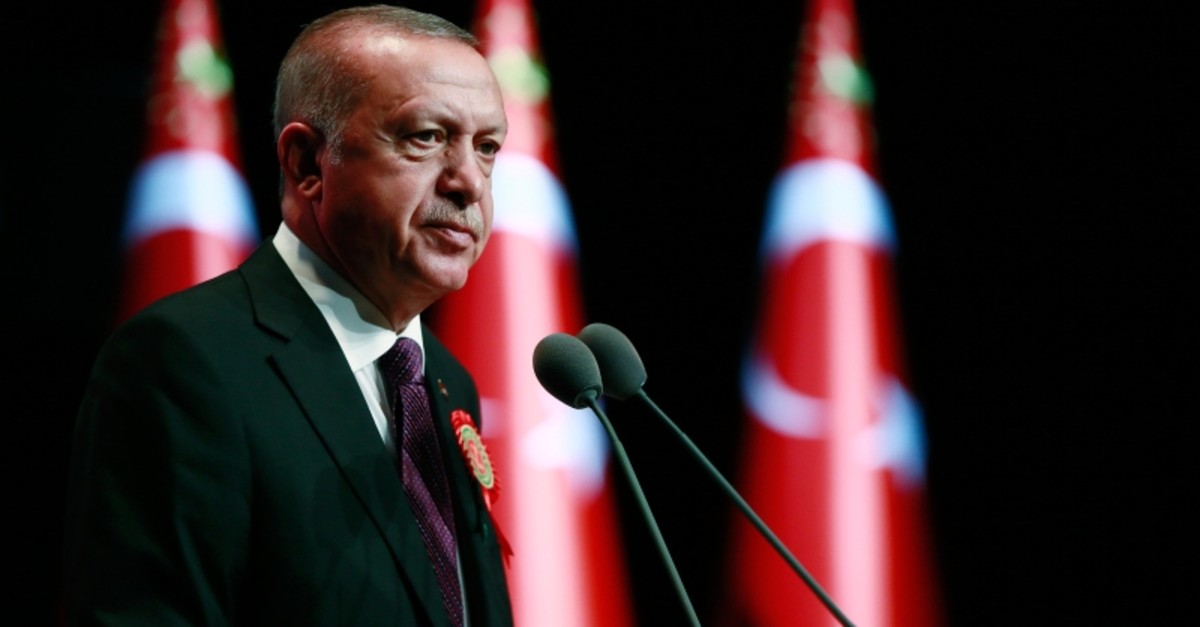 Turkey has always abided by "the principle of separation of powers," on which it has built its democracy, President Recep Tayyip Erdoğan said Monday.

Speaking at a ceremony to mark the opening of the judicial year at the Beştepe National Congress and Culture Center in the capital Ankara, President Erdoğan said, "The independent functioning of legislative, executive and judiciary powers does not prevent them from liaising with the president's mission in the [Turkish] Constitution as head of state."

"Although Turkey has experienced lots of adversity from tutelage to coups, it has always abided by the idea of separation of the powers that tops the will of people and an understanding of democracy built on that idea," he added.​

Erdoğan also said that judicial reforms aim to strengthen the implementation of justice.

"We have signed historical reforms that will improve the judicial system in every field. Today, we are preparing for new reforms to strengthen democracy. We are preparing a comprehensive action plan regarding human rights. We are committed to ensuring a simple and effective operation in civil proceedings," he added.

Addressing the Judicial Reform Strategy Document, Erdoğan said Turkey has shown a commitment to its obligations for full European Union membership with this document, while the EU bodies display "an obviously discriminatory attitude toward Turkey."

This year, Turkey is set to carry through the Judicial Reform Strategy Document, a plan unveiled on May 30 to improve the working of the nation's judiciary.

Turkey introduced a new judicial reform package with the aim of strengthening the independent, objective, accountable and transparent features of the judiciary.

Announcing the reform strategy, President Erdoğan said the reforms would ensure the citizens' trust in the system while enabling an investment atmosphere that is more predictable. He added that the reforms would also strengthen freedom of speech.

The nine targets are the protection and improvement of rights and freedoms, improvements of judicial independence, objectivity and transparency, improving both the quality and quantity of human resources, increasing performance and productivity, enabling the right of defense to be used effectively, making justice more approachable, increasing the effectiveness of the penalty justice system, simplifying civil justice and administrative procedure and lastly, popularizing alternative mediating methods. Prepared by the Justice Ministry for the period of 2019-2023, the reform strategy envisions a "trust ensuring, approachable justice system."

The strategy was determined by consulting bar associations, law faculties, nongovernmental organizations, judges, prosecutors, lawyers, writers, journalists and academics. In addition to the views of experts, there have also been surveys conducted with citizens regarding their expectations. The document is being prepared in accordance with the EU negotiations' 23rd chapter that is titled "Judiciary and Fundamental Rights." In the preparation period of the reforms, there have also been meetings in the European Council and EU commission.

In its report published this year, the EU accused Turkey of distancing itself from the bloc and its values, adding that it sees no reason to unblock the country's EU membership talks. The report underlined "further serious backsliding" on human rights, judicial independence and stable economic policy.

The EU decided last year that no new chapters in Turkey's accession talks should be opened or closed and the latest report noted: "The underlying facts leading to this assessment still hold."

Signing a partnership agreement with the European Economic Community (EEC) in 1963, Turkey applied for EU membership in 1987 and accession talks began in 2005. But negotiations stalled in 2007 due to objections from the Greek Cypriot administration on the divided island of Cyprus as well as opposition from Germany and France.

Erdoğan said earlier this year that Turkey would continue to work toward its strategic goal of becoming a full member of the European Union.

Turkish Bars Association President Metin Feyzioğlu shared his desire for the new judicial term to be one of peace at the 2019-2020 Judicial Term Opening Ceremony organized at the Beştepe Peoples' Congress and Cultural Center.

Recalling the Turkish Republic's founder Mustafa Kemal Atatürk's "Address to the Youth," Feyzioğlu said, "For us, when the matter is that of our homeland, all else is just noise."
Acknowledging the public's expectations on solutions for problems faced by lawyers, Feyzioğlu pointed out that problems and expectations are one and the same.

He added that the Judicial Reform Strategy is being prepared with support from President Erdoğan and Minister of Justice Abdulhamit Gül with contributions from all divisions.

Feyzioğlu mentioned that domestic violence, especially toward women and children, must be combatted by society as a whole, and as of the first perpetration of violence, victims should have a lawyer to protect them. He noted that this issue is beyond party politics and that everyone must work together to find a solution.

The Bar Association head also said that the Gülenist Terror Group's (FETÖ) attempt to drag the country into a civil war was prevented by the Turkish people's strong will.

Supreme Court President Ismail Rüştü Cirit conveyed his wishes for the new judicial term to be a successful one in terms of justice, democracy, human rights and to bring justice and peace to all, during his speech at the opening ceremony.

He stressed that a nation cannot claim to be a constitutional state if it cannot ensure an independent judiciary, which is the foundation of individual rights and freedoms. "The independence of the judiciary from politically affiliated legislative and executive power, as well as all other houses of power, is the unchangeable tenet of constitutional states," Cirit said.

Cirit pointed out that the transition to a presidential system of governance in Turkey and the formation of new balances of power reinforced checks and balances, contributing to objective jurisdiction.

He added that given the multiple changes made to the 1982 Constitution that was in effect and the trial of those that forcefully imposed this constitution on the public, politicians have a responsibility to retaliate through negotiations to produce a wholesome, balanced new constitution.

Cirit said that if all nine articles of the publicly announced Judicial Reform Strategy are carried out to their full extent, its benefits to strengthening the judicial system would be crucial. He said: "In this sense, the geographical warranty granted to judges, is a positive step toward strengthening the independence of the judiciary. An independent, unbiased and transparent judiciary, effective use of the right to defend, strengthened access to justice, and increased productivity in judiciary, are always principle topic headers in this regard."

Cirit indicated that they expected the enforcement of the strategic reforms to begin shortly.
He emphasized that legal matters should be discussed in an unprejudiced, transparent and democratic manner to ensure better problem solving.

"If conflict and arguments replace institutional and social dialogue, a technical problem that could have easily been solved, may get stuck in a higher political context and remain unsolved. For this reason, I think it is important that new judicial term ceremonies should be held in public, conducted democratically and transparently with all sides attending. I extend my gratitude to the Turkish Bars Association for supporting our constructive and reconciliatory stance and the bars that accepted our invitation," Cirit stated.