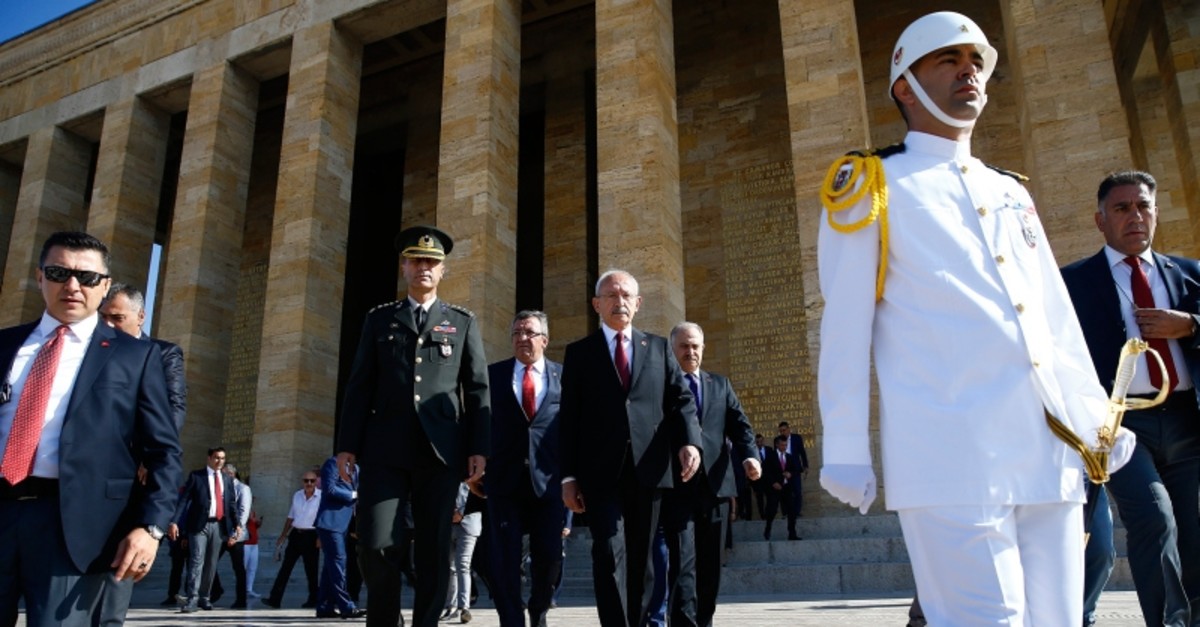 Turkey's main opposition party, the Republican People's Party (CHP), celebrated its 91st foundation anniversary Monday at its headquarters in Ankara and provincial branches across the country.

The foundation anniversary events began in Ankara with a CHP delegation's visit to Anıtkabir, the mausoleum of Mustafa Kemal Atatürk, who is the founder of the modern Turkish Republic and also the first leader of the CHP.

Signing the guest book after the ceremony, CHP Chairman Kemal Kılıçdaroğlu wrote that this year Turkey proudly marked the centennial anniversaries of two historically crucial events: First, May 19, 1919 – Mustafa Kemal's arrival in the northern city of Samsun and the initiation of an organized resistance movement against the Allied invasion of Ottoman territories after World War I, which is currently commemorated as Youth and Sports Day. And secondly, the Sivas Congress held on May 7, 1919, when different resistance groups scattered across the country were unified under the Association for the Defense of the Rights of Anatolia and Rumelia.

This association was essential in convening the Ottoman Parliament in Ankara, which was suspended by the Allies after they occupied the then capital Istanbul. The Turkish Grand National Assembly, headed by Mustafa Kemal and dominated by the association's members or former lawmakers backing the nationalist cause, managed to form a unified front against Allied invasions, train and equip a regular army, suppress rebellion launched by different groups, initiate diplomacy and finally defeat the Allied-backed Greek troops in Anatolia, which culminated in the liberation of the western city of Izmir on September 9, 1922.

The major bulk of the association went on to become the People's Party launched on September 9, 1923, shortly before the declaration of the Republic on October 29. The party was renamed as the Republican People's Party in 1924 over the launch of a controlled and short-lived opposition party.

"The CHP is the party of those who are determinately connected to the unity and integrity of our nation, the independence of our homeland and the principle of 'Sovereignty, without any condition and reservation, belongs to the nation'," Kılıçdaroğlu wrote.

The CHP delegation also visited the tomb of Ismet Inönü, the second president of Turkey who served between 1938 and 1950, and was also the party's longest-serving chairman with a tenure of 34 years until 1972.

Starting from the mid-1930s until the end of World War II, the CHP acted as the party-state, whereas the single-party rule continued until the first free and fair elections in 1950. During that period, the party introduced many reforms to transform Turkish cultural life, help launch a meaningful industry, develop the almost non-existing infrastructure and build a nation-state from the remnants of a fallen empire. However, authoritarian policies, repression and the top-down nature of reforms, coupled with a lack of success in various areas, led to deep resentment in many parts of the society, especially the conservatives.

The CHP was the main opposition party between 1950 and 1960, which saw the rule of the conservative and center-right Democratic Party (DP). The electoral system at the time, introduced by the CHP itself for its possible lead in the elections, gave the leading party a hugely disproportionate and crushing majority in Parliament, thus rendering the opposition ineffective (In the 1957 elections, the DP won 424 out of 610 total seats with 48.6 percent of the votes while the CHP only won 178 seats with 41.4 percent). The deteriorating economy, the political gridlock and the DP's increasingly authoritarian policies ended with the May 27, 1960 military coup, marking the start of many coups and attempts yet to come. Although the CHP was not directly linked to the coup, the party and its voter base were both instrumental in materializing the overthrow of the DP government by a small junta, and this caused further resentment against the CHP in the future. In the meantime, Inönü and the party were also instrumental in making sure that the military government was short-lived, and a democratic constitution enshrining political and labor rights was introduced. Inönü himself was the key figure in preventing two coup attempts launched by radical groups in the military in 1962 and 1963.

In the 1960s, the CHP positioned itself at the "left of the center", as famously described by Inönü, but this shift was not welcome by the CHP's traditionally centrist cadres, and the party was in powers only through short-lived coalition governments. Along with a global rise of the left-wing ideologies in the world and in Turkey, the party moved closer to a social-democratic position especially after the election of Bülent Ecevit, who coined the term "Democratic Left," to the party's top post, in part owing to his stance against the 1971 military coup. The CHP was the leading party in the 1970s, emerging victorious in the 1973 and 1977 elections, but failed to form a majority government or a stable coalition while the country was on the brink of an ideological civil war and battling with deep economic problems. It was shut down along with other political parties in the aftermath of the September 12, 1980 military coup, only to be re-established on September 9, 1992.

However, most of the CHP's former voter base and cadres had shifted to the Social-Democratic Populist Party (SHP), established in 1985 and led by Inönü's son Erdal Inönü, while Ecevit, who officially returned to politics with a referendum in 1987 that revoked political restrictions, went on to establish the Democratic Left Party (DSP). Founded mainly by SHP dissidents led by Deniz Baykal, the CHP's re-establishment mainly served to increase the divide in the Turkish center-left and denying them the chance of gaining power in the 1990s. The CHP and the SHP joined forces under the former through a convention in February 1995, but the party barely managed to pass the 10 percent national threshold in the December 1995 general elections, while Ecevit's DSP got 14 percent and became the largest party in the left.

The CHP was left out of Parliament in the 1999 elections with 8.7 percent of the votes as the DSP's popularity greatly rose through the capture of the PKK terrorist group's leader Abdullah Öcalan during a short-lived minority caretaker government led by Ecevit, who was also the junior partner of the coalition formed after the Feb. 28, 1997 "postmodern" military coup ended in the forced resignation of the government led by the conservative Welfare Party (RP). However, this period was marked with a series of economic crises, the devastating August 17, 1999 earthquake and political instability.

In the November 3, 2002 early elections, only two parties managed to pass the 10 percent threshold: the center-right Justice and Development Party (AK Party), established only a year prior in 2001, at 34.3 percent and the CHP at 19.4 percent. Since then, the party serves as the main opposition party after five parliamentary elections, with its votes climbing as high as 26 percent in 2011, which was the first election after Kılıçdaroğlu was elected as party chairman in May 2010.

The CHP failed to prop up nationwide support in major referendums and presidential elections despite forming alliances with various parties.

The CHP received 22.6 percent of the votes in the last parliamentary elections on June 24, 2018 and was the leading force in the Nation Alliance, which includes the right-wing Good Party (IP) and the conservative Felicity Party (SP) in addition to various minor parties.

The party has recently been enjoying its biggest success in local elections in the last two decades, after winning Istanbul and Ankara from the AK Party while its votes reached 29.8 percent.