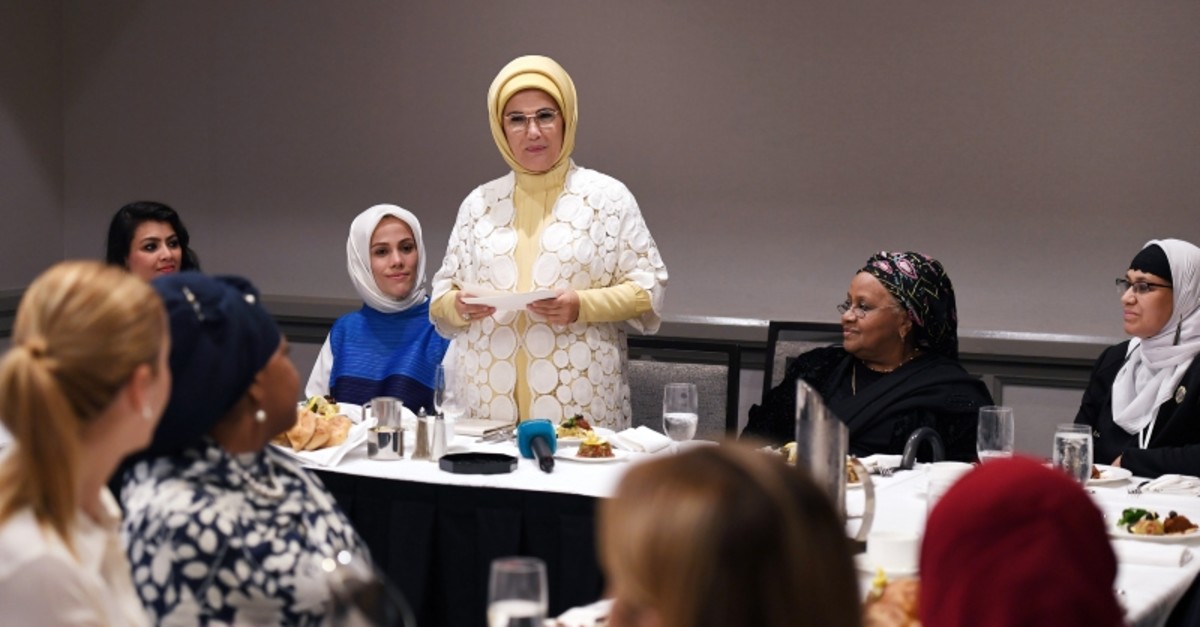 | AA Photo
by Daily Sabah with AA Sep 23, 2019 12:31 am
First lady Emine Erdoğan on Sunday underlined women's role in Islam in a meeting with the female representatives of the U.S. Muslim community in New York.
Erdoğan is currently in the U.S. as part of the Turkish delegation to the 74th U.N. General Assembly. She spoke to the group at the New York Hilton hotel in Midtown Manhattan.
She said being with the women gave her the feeling of meeting with relatives she had not seen in a long time.
Erdoğan criticized the rise of racism and anti-Muslim hatred around the world. "Muslims are mentioned in the same sentence with terrorism, cruelty toward women and war," she said, pointing out the links wrongfully drawn between certain reproachable cultural practices and Islam. She also emphasized the need for unity among Muslims.
Inspiration can be drawn from prominent Muslim Americans, such as fencing athlete Ibtihaj Muhammad, political activist Malcolm X and boxer Muhammad Ali, Erdoğan said.
Touching specifically on the misrepresented topic of women's rights in Islam, Erdoğan mentioned that in the Islamic Golden Age, which lasted from the 8th century to the 14th century, women were involved in every aspect of life as "pioneers" and leaders. She gave the example of the oldest, continually operating university in the world, which was founded in Morocco by Fatima al-Fihri, an Arab Muslim woman.
"We should follow in these footsteps… We need to tell aloud the value that Islam has added to science and art, and the civilization it has created," said Erdoğan.
Fatmanur Altun, head of the Turkish Youth and Education Service Foundation (TÜRGEV), a civil society organization focusing on the education of girls, also delivered a speech during the event and told attendees about the activities of TÜRGEV as a model educational foundation both within the country and in the U.S.
Among the attendees were Aisha al-Adawiya, the founder and executive director of Women in Islam organization, Samira Nazneen of Bangladeshi American Advocacy Group and Raghad Bushnaq, the founder of Mozaic, a nonprofit organization helping refugees and people in need in the Washington D.C. area.
The gathering was also attended by Foreign Minister Mevlüt Çavuşoğlu's wife Hülya Cavuşoğlu, Treasury and Finance Minister Berat Albayrak's wife Esra Albayrak and Defense Minister Hulusi Akar's wife Şule Akar.
Last Update: Sep 23, 2019 8:49 pm
RELATED TOPICS