Impossible for locals to return to Idlib under current circumstances 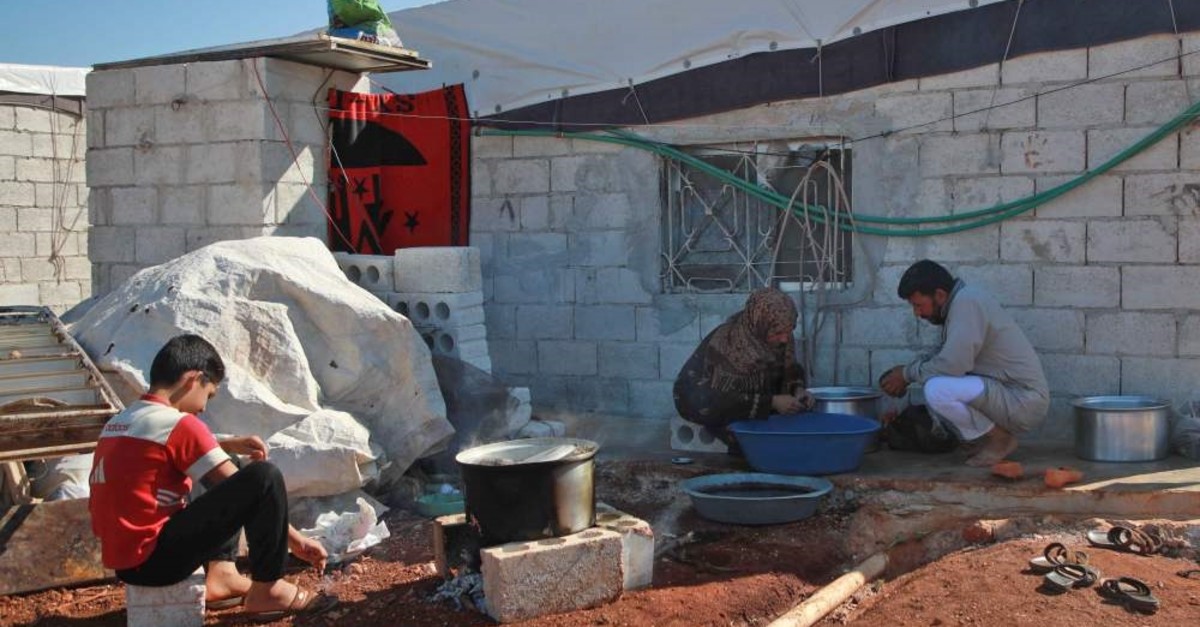 Airstrikes by Damascus and regime ally Moscow since late April have killed nearly a thousand civilians, according to the Britain-based Syrian Observatory for Human Rights.
by Daily Sabah with AA
Oct 01, 2019 12:10 am

Civilians, who had to leave Idlib's town of Khan Sheikhoun due to fierce regime attacks, say they cannot return to their homes under regime control

Despite regime propaganda claiming that civilians have started to return to their homes in northwestern Syria's Khan Sheikhoun following the unilateral cease-fire declared by the regime, reports show that this is not the case. Civilians say that their homes were destroyed in regime attacks, and it is impossible for them to return under regime control. Assad regime forces captured Khan Sheikhoun last month following two days of intense fighting with the opposition, who controlled the town since 2014. Syrian regime forces advanced into Khan Sheikhoun with the help of Russian airstrikes. The opposition's territorial foothold in neighboring Hama province dates back to the earliest days of the eight-year conflict. Displaced civilians from Idlib complain that they cannot return to their hometowns despite the decreasing amount of violent attacks since the regime announced a unilateral cease-fire on Aug. 31.

Civilians who have become the victims of attacks by the regime and Russia do not want to return to places now controlled by regime forces. In attacks conducted by the Syrian regime and Russia, nearly 1 million people had to flee their homes. Only 37,000 of them were able to return to their homes since the unilateral cease-fire. Mostly living under olive trees, civilians have expressed their discomfort with the regime's propaganda that claims citizens have been returning to their hometowns.

Speaking to Anadolu Agency (AA), Ali Recep, a civilian from Khan Sheikhoun near Idlib, said despite the regime's statements claiming civilians have been returning to their hometowns, the truth is only known by civilians living in refugee camps or areas under the control of opposition groups.

"The regime makes statements and gives the image it wants. This is not the truth," he added.

Eymen Ramadan, another civilian who had to flee his hometown, also said: "No one accepts Russia's guarantor status. No one returns under their control. Regime forces plundered even electric cables when they took control of the town. Under these circumstances, it is impossible for us to return to our hometown."

The escalating violence in Idlib shattered a deal reached in September last year between Russia and Turkey to establish a buffer zone.

The violence since late April has killed more than 960 civilians, according to the Syrian Observatory for Human Rights. Also, violence in the region displaced more than 1 million people every year.

The heavy bombardment since late April has damaged or impacted 87 educational facilities and a further 200 schools are being used as shelters for those displaced by the fighting.

The area is currently inhabited by about 4 million civilians, including hundreds of thousands of people displaced in recent years by regime forces from cities and towns throughout the war-weary country.

Turkey warned that further aggression by the Syrian regime and allies might trigger an influx of millions of refugees to Turkey, which currently hosts over 3.6 million displaced Syrians, making it the world's top refugee-hosting country.

U.N. Secretary-General Antonio Guterres last week announced the formation of a constitutional committee for Syria, a long-awaited step in a stalled peace process.

"It will be facilitated by the United Nations in Geneva," Guterres told reporters, adding that it would be convened in the coming weeks. The United Nations sees the committee as the next step in efforts to find a political solution to end the more than eight-year war in Syria.

Khan Sheikhoun, along the M5 highway stretching from the capital Damascus to Aleppo city, was bombed with sarin in 2017, an attack that killed dozens, wounded hundreds of others and prompted a U.S. missile strike.

An investigation by the United Nations and the Organization for the Prohibition of Chemical Weapons blamed the attack on the Syrian regime. Damascus denies using such weapons.