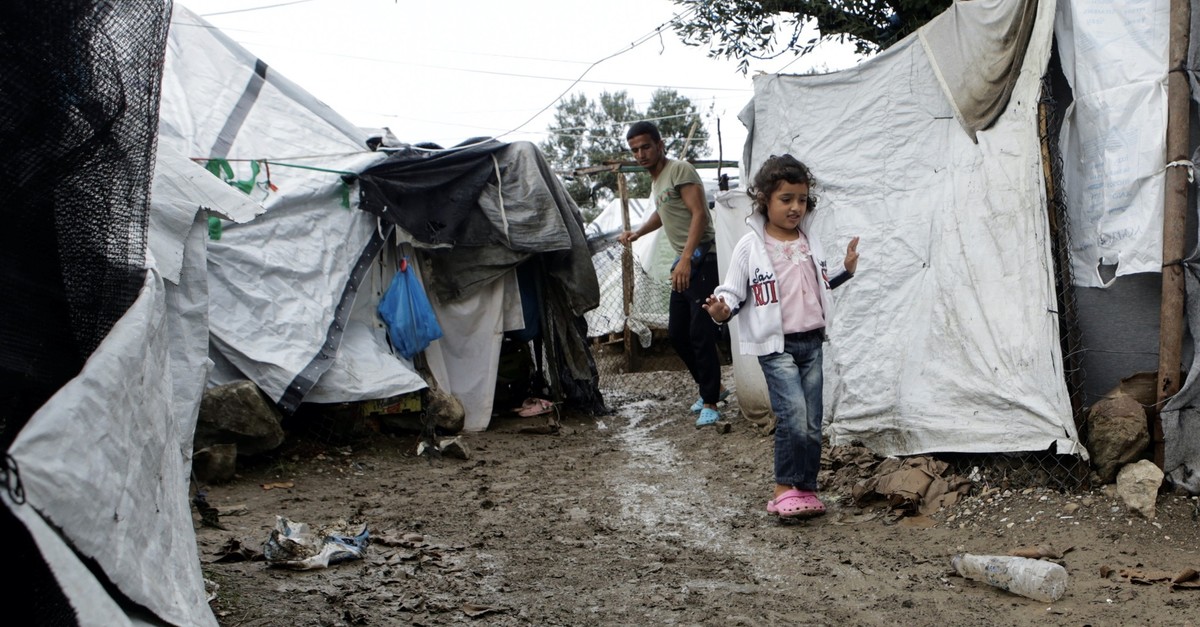 A girl makes her way at a makeshift camp for refugees and migrants next to the Moria camp, following rainfall on the island of Lesbos, Greece, Oct. 8, 2019.
by Daily Sabah with Agencies Oct 09, 2019 1:24 am

Turkey, hosting the most refugees in the world, has called on the international community on Tuesday to share its burden.

"Turkey is in the vanguard of the global effort to elevate the suffering of the refugees. We strongly advocate equal burden sharing in the face of this enormous task," said Yavuz Selim Kıran, Turkey's deputy foreign minister, at the 70th session of U.N. Refugee Agency's Executive Committee.

"Refugees and refugee hosting countries should not be left alone," Kıran added.

Kıran voiced concerns about statelessness around the world.

"Ending statelessness is an ambitious but also virtuous goal," he said. "It is estimated that today there are approximately 12 million stateless people in the world. What is more devastating for us is that one out of three stateless people are children."

He also reiterated support for the UNHCR's #IBelong campaign and said, "Thanks to the progress achieved in the first five years of this campaign almost 170,000 stateless people gained nationality."

Kıran said that Turkey did its part to tackle statelessness and became a party to the 1954 convention in 2015.

He added that stateless people have access to education, health care, labor and all basic needs in Turkey under the law.

"According to Turkish citizenship law, a person born in Turkey, who cannot acquire nationality of his or her mother and father by birth is granted Turkish nationality," Kıran went on to say.

He said that Turkey sees "the upcoming global refugee forum as the perfect opportunity to increase contributions of the international community, as well as to discuss how we can further help refugees."

Kıran said President Recep Tayyip Erdoğan will be one of the co-chairs of the forum.

"We expect all the relevant stakeholders to declare substantial, durable and sustainable pledges during the forum," he added.

The first Global Refugee Forum, which will be held on Dec. 17-18 in Geneva, will focus on areas, including arrangements for burden and responsibility-sharing, education, jobs and livelihoods, energy and infrastructure, solutions, and protection capacity.

U.N. High Commissioner for Refugees Filippo Grandi thanked Turkey for being the largest refugee hosting country in the world for five years in a row.

"I was recently, just a few weeks ago, in Turkey, could once again see the very, not very well known but very important work that is done, for example, on the education of refugees and insertion in the labor market," said Grandi.

"We will continue to work together and offer support, hoping that peace will prevail in all countries where those refugees come from," he added.

Kıran and Vitorino discussed cooperation between Turkey and IOM, the Turkey-EU refugee deal, illegal migration, and the fight against terrorism.

Meanwhile, the European Union warned yesterday of a repeat of the chaotic influx of migrants that caught Europe unprepared in 2015, as ministers from the EU countries met in Luxembourg to discuss a permanent solution to the migration wave the continent is facing.

EU ministers met to discuss migration as Greece has again become the main gateway to Europe for people fleeing wars and poverty in the Middle East, Asia and Africa, with U.N. data showing nearly 45,600 arrivals by sea so far this year.

"If we leave all the countries on the EU's external border (to fend for themselves), there will never be a common European asylum policy," German Interior Minister Horst Seehofer said, speaking for the EU ministers.

"And if there is no common European asylum policy, there is a danger that uncontrolled immigration will once again take place, throughout Europe. We have seen this before and I do not want it to happen again," he told reporters in Luxembourg.

The bloc is wary of any recurrence of the 2015 crisis that sowed bitter divisions among EU states, strained social and security services and fueled support for populist, anti-immigration, euroskeptic and far-right parties.

Greece saw the highest monthly arrival numbers in August since the 2016 EU-Turkey deal that greatly reduced sea crossings there, according to a document prepared by Finland, which currently holds the bloc's rotating presidency.

Turkey warned about a new migration waveAnkara and Brussels signed an agreement in March 2016 to find a solution to the influx of refugees heading to the union. According to the deal, Turkey was promised a total of 6 billion euros in financial aid, which was initially designed to be given to the country in two stages and be used by the Turkish government to finance projects for Syrian refugees. In response to this, Turkey took the responsibility of discouraging irregular migration through the Aegean Sea by taking stricter measures against human traffickers and improving the conditions of more than 3 million Syrians living in Turkey.

Although the EU had pledged 6 billion euros to improve the living conditions of Syrian refugees in Turkey, only 2.22 billion euros were disbursed as of this June, according to Turkey. Also, the EU has yet to fulfill other articles such as the visa-free deal for Turkish citizens and updating the customs union.

Turkey currently hosts some 3.6 million Syrian refugees, more than any other country in the world. Ankara has so far spent $40 billion on the refugees, according to official figures.

Being a key transit point for irregular migrants aiming to cross into Europe to start new lives, especially those fleeing war and persecution, Turkey recently reiterated its warnings for European countries about a possible new migration crisis and called on them to take action by sharing the burden of responsibilities.

The pressure on overcrowded migrant camps on Greece's Aegean islands is rising anew. Charity group Oxfam said over 13,000 men, women and children were now crammed into the Moria camp on Lesbos that was designed to accommodate 3,100 people.

"The situation of children in the Moria camp is particularly worrying," Oxfam said in a statement, stressing that many of those under-age were on their own.

Speaking to reporters before the start of the meeting, Dimitris Avramopoulos, the EU commissioner for migration, home affairs and citizenship, said the current situation in the Mediterranean cannot continue.

He said the plan proposed by Italy, Germany, France and Malta in the previous meeting held in Malta last month will be discussed during the meeting.

Cyprus, Greece and Bulgaria said in a separate document at the ministerial meeting, which was seen by Reuters, that the situation bore "alarming elements of an emerging crisis," adding, "Europe cannot be caught unprepared for a second time... The EU will have to consider positively the allocation of further funds to those countries of the broader region of the Eastern Mediterranean route affected by immense migratory flows."

The mini summit held on migration had seen an agreement on a temporary system in countries accepting asylum-seekers.

According to the U.N., around 80,000 refugees and migrants arrived in Europe so far in 2019 and 1,071 were killed or missing during the dangerous journey.