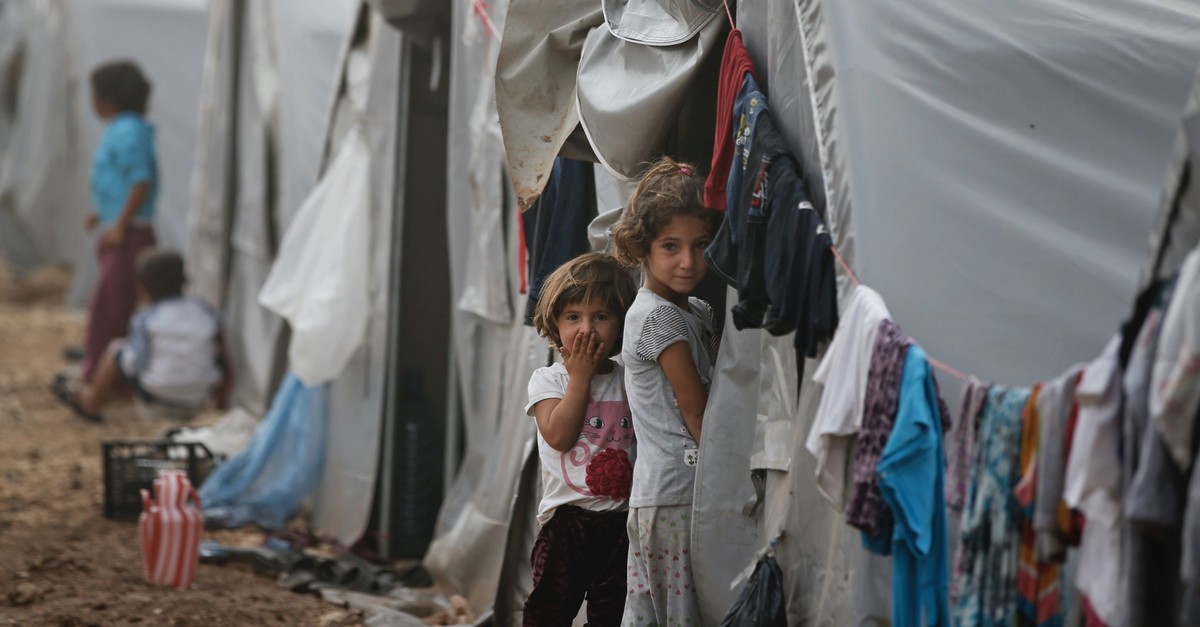 Just hours before Turkey launched an operation on the eastern part of the Euphrates River, Ankara has reiterated its call for the international community to support its military initiative to clear the region from terrorists and enable Syrian refugees to return home to a stable and peaceful environment. The international community needs to support Turkey's efforts to establish peace and stability in the region by clearing terrorists and allowing the return of Syrian refugees to their homes, Presidential Communications Director Fahrettin Altun said late Tuesday.

In an op-ed for The Washington Post, Altun said the U.S. has borne the brunt of the anti-Daesh campaign for a long while. "Turkey, which has NATO's second-largest army, is willing and able to take the lead now and drive it home, bringing millions of refugees back to Syria in the process," Altun wrote. "At this critical juncture, the international community must rally behind Turkey's rebuilding and stabilization efforts," he added, saying that the Turkish military, together with the Free Syrian Army, will cross the Turkish-Syrian border shortly.

Altun also asserted that the partnership of the U.S. with the PKK terror group's Syrian branch People's Protection Units (YPG) has been dubbed as "tactical" by American officials, adding that U.S. President Donald Trump's decision to pull forces back from northern Syria "reflects that view."

"Like the United States, Turkey does not go abroad in search of monsters to destroy. But when monsters attempt to knock down our doors and harm our citizens, we have to respond," Altun wrote. He asserted that Turkey aims to eliminate a long-stating threat by the YPG terrorist group and liberate Syrians "from the yoke of armed thugs."

He also highlighted Turkey's role in the wake of Daesh attacks, saying that the country was the first to fight Daesh ter

"Our country also helped the Free Syrian Army keep thousands of IS [Daesh] militants behind bars for years," he said. "It is in our interest to preserve what the United States has accomplished, and to ensure that history does not repeat itself."

The senior official also praised the planned safe zone in northern Syria, saying it is good for Europe because

it will address violence and instability in Syria, which he said were the root causes of illegal immigration and radicalization. "Finally, the plan helps Turkey shelter innocent people from a known terrorist organization," he wrote.

Citing President Recep Tayyip Erdoğan's speech on the safe zone at the U.N. General Assembly last month, Altun said up to 2 million Syrians will volunteer to live in a 20-mile secure area spanning from the Euphrates River to the Syria-Iraq border. He said Turkey will build on its past experiences in northern Syria to keep the safe zone secure and stable and believes Syrians are equipped to govern themselves through elected local councils.

Turkey aims to ensure safe return of refugees to Syria

Turkey aims to ensure the safe return of the Syrian refugees it is hosting, said Presidential Spokesperson İbrahim Kalın on Tuesday.

"We have to take care of our border security and make sure the Syrian refugees go back to their homes that they've come from, securely and voluntarily," Kalın said in an interview with the Al Jazeera news network. He also talked about the Turkish military operation against the YPG terrorist organization in northern Syria. "The actual goal is to establish a safe zone that will serve two purposes: one is to secure Turkey's border with Syria by eliminating terrorist elements such as ISIS [Daesh] and the PKK/[Democratic Union Party] PYD/YPG, and the other is to create a space for the refugees to return voluntarily and safely," Kalın said. Kalın emphasized that the Turkish military action does not aim to transform the demographic structure of the region. "We have no interest in changing the demographics in Syria. It was the PYD [the political branch of the YPG]/YPG that actually changed the demographics east of the Euphrates by invading these Arab towns and villages, Turkmens towns or Christian towns and villages, forcing people to leave or settle in other places," he said. Kalın pointed out why Syrians do not feel safe in the region. "The YPG has harassed, killed or kidnapped not only Arabs, Kurds and others who do not subscribe to their ideology but also Christian children. The Syrian Syriac community has made a number of statements about this, the YPG kidnapping their Christian children to enlist them in their ranks," Kalın said also citing Turkey's efforts to end terrorism in Syria.

While discussions regarding the operation have been occupying media outlets around the world, diplomacy over the issue is also continuing nonstop. Erdoğan and his Russian counterpart Vladimir Putin discussed Turkey's anti-terror operation in northeastern Syria and the safe zone in a phone call, the Turkish Presidency said yesterday. In the call, Erdoğan told Putin that the operation to the east of the Euphrates will contribute to peace and stability in Syria and pave the way for the political process to resolve the conflict in the country. Highlighting that Turkey prioritizes the protection of Syrian people's rights and interests, Erdoğan said he appreciates Russia's constructive stance regarding the matter. Meanwhile, Foreign Minister Mevlüt Çavuşoğlu reiterated that terrorists are Turkey's only target.

"We will contribute to Syria's territorial integrity," Çavuşoğlu said, adding that the operation in northern Syria is Turkey's right under U.N. resolutions and international law. He noted that Ankara will inform Syria, the United Nations and others about the operation in northern Syria. Çavuşoğlu also talked with his Russian counterpart Sergey Lavrov on Tuesday to discuss the Syria situation over the phone. They discussed in detail the Syrian settlement process, paying particular attention to the situation in the country's northeast, the Russian Foreign Ministry said in a statement. They also exchanged views on the situation in the Balkans, the statement added. The ministers agreed to continue an intensive dialogue with a view to further strengthen and develop Russian-Turkish cooperation in all areas. Another diplomatic talk took place between Presidential Spokesperson İbrahim Kalın and U.S. National Security Adviser Robert O'Brien yesterday. They held a phone call to discuss Turkey's operation in northeastern Syria and the steps to be taken following the establishment of a safe zone there.

U.S. President Donald Trump criticized once again the U.S. involvement in the Middle East, as he argued that Turkey should take over the captured Daesh fighters in Syria. Trump said the U.S. should never have been involved in the Middle East, as he noted that they have withdrawn 50 troops out of Syria. He continued by saying that Turkey "must" take over captured Daesh terrorists that Europe refused to have returned. "The stupid endless wars, for us, are ending!" he said. Trump has been facing mounting pressure in Washington after the White House announced late Sunday that the U.S. would pull back its forces in Syria ahead of a "long-planned" Turkish operation. The Trump administration has ruled out any U.S. support for the operation, and in the face of significant pushback, the president, in a drastic change of tone, vowed "if Turkey does anything that I, in my great and unmatched wisdom, consider to be off limits, I will totally destroy and obliterate the economy of Turkey." However, he also defended Turkey and its close relationship with the U.S., saying he had a "very good relationship" with Erdoğan. Meanwhile, French President Emmanuel Macron is very worried at the prospect of a Turkish army operation into areas controlled by YPG forces in northern Syria, his office said yesterday. Macron met senior YPG member Ilham Ahmed at the Élysée Palace on Monday "to show that France stands alongside the Syrian Democratic Forces (SDF) as they are partners in the fight against Daesh (Islamic State group) and that we are very worried by the possibility of a Turkish operation in Syria," a presidential aide told Agence France-Presse (AFP). Macron has on occasion irritated Turkey by hosting members of the YPG in Paris. Iranian President Hassan Rouhani said Turkey has the right to worry about its borders with Syria, during a cabinet meeting yesterday. According to Iranian local media, Rouhani called for "removing Turkey's security concerns," adding that a "proper path" should be taken to remove these concerns. However, he noted that neither Turkey nor Syria would benefit from this operation.

President Erdoğan yesterday called leaders of main opposition Republican People's Party (CHP), the Nationalist Movement Party (MHP) and the Good Party (İP) to inform them about the operation, immediately after the operation was launched. It was also reported that the U.S. ambassador to Ankara was summoned to the Foreign Ministry yesterday to be briefed on Turkey's military offensive into northeastern Syria, minutes after Ankara launched its cross-border operation.

U.N. Security Council members were also invited to the Foreign Ministry to be informed about the operation. The Defense Ministry yesterday said that the U.S., Russia, the U.K., Germany, France, Italy, NATO and the U.N. were informed about the operation. CHP leader Kemal Kılıçdaroğlu expressed his wishes for the operation to be completed successfully and without any casualties. MHP leader Devlet Bahçeli stated that the operation will establish a safe zone and bring stability to the region. In Belgium's capital Brussels, PKK supporters demonstrated yesterday against Turkey's military operation targeting the PKK's Syrian branch, the YPG. Turkey is at the forefront of a crisis and has legitimate security concerns about Syria, said NATO Secretary-General Jens Stoltenberg. Turkey also informed Syria about its military operation via diplomatic note sent to the regime's consul general in Istanbul, Çavuşoğlu said yesterday.

Meanwhile, the YPG has issued a "general mobilization" call along the border with Turkey yesterday. One of the first actions of the terrorist group following the news of the offensive was to infiltrate the Syrian National Army (SNA) frontline on Tuesday night through the northern Tal Rifaat district of Syria, according to local sources.