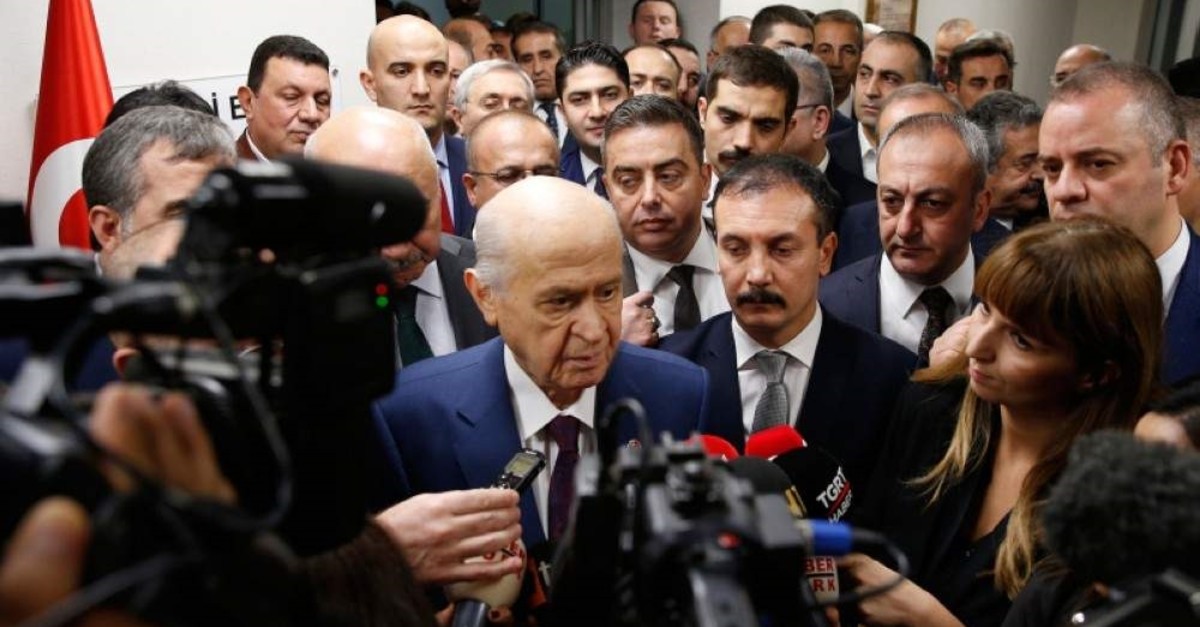 MHP Chairman Devlet Bahu00e7eli speaks to reporters on Oct. 26, 2019 (AA Photo)
by Daily Sabah Oct 26, 2019 2:09 pm
Nationalist Movement Party (MHP) Chairman Devlet Bahçeli condemned U.S. President Donald Trump for praising a terrorist leader sought with an Interpol notice and writing a controversial letter to the Turkish president, as he extolled Turkey’s strategic success in reaching its goals through deals with Russia and the U.S.
“It is a shame and unlawful for an ally country to praise and honor a murderer who is sought with Red Notice,” Bahçeli told reporters on Saturday, as he urged Washington to extradite PKK’s Syrian offshoot People’s Protection Units (YPG) ringleader Ferhat Abdi Şahin who goes by the pseudonym Mazloum Kobani.
“Will Mr. President keep him [Mazloum Kobani] and display him at a museum as a souvenir? The best way to resolve the matter is by extraditing him,” Bahçeli said.
Regarding the controversial letter, Bahçeli said it has significantly damaged bilateral relations and Turkish people consider it was tossed in garbage.
Trump sent a bizarre letter, thought by many to be a prank, to Erdoğan ahead of Turkey's Operation Peace Spring in northeastern Syria, warning the country to avoid carrying it out.
The MHP chairman praised President Recep Tayyip Erdoğan for his determination to protect Turkey’s national interests.
“Turkey has reached its goals through Operation Peace Spring and has erased terrorism off its borders,” Bahçeli said.
Referring to the 13-point agreement with the U.S. reached on Oct. 17 and the agreement with Russia on Oct. 22 as strategic achievement, Bahçeli said it signals a national awakening.
Tensions between Turkey and the U.S. have been on the rise as Turkey launched Operation Peace Spring on Oct. 9 to clear its borders from terrorists with the goal to establish a safe zone along the border, which will facilitate the resettlement of hundreds of thousands of Syrians.
The operation, conducted in line with the country's right to self-defense borne out of international law and U.N. Security Council resolutions, aims to establish a terror-free safe zone for Syrians return in the area east of the Euphrates River controlled by the U.S.-backed Syrian Democratic Forces (SDF), which is dominated by YPG terrorists.
The PKK — listed as a terrorist organization by Turkey, the U.S. and the European Union — has waged a terror campaign against Turkey for more than 30 years, resulting in the deaths of nearly 40,000 people, including women, children and infants.
Turkey has long decried the threat from terrorists east of the Euphrates in northern Syria, pledging military action to prevent the formation of a "terrorist corridor" there.
Since 2016, Turkey's Euphrates Shield and Olive Branch operations in northwestern Syria have liberated the region from YPG/PKK and Daesh terrorists, making it possible for nearly 400,000 Syrians who fled the violence to return home.
Last Update: Dec 20, 2019 1:15 am
RELATED TOPICS