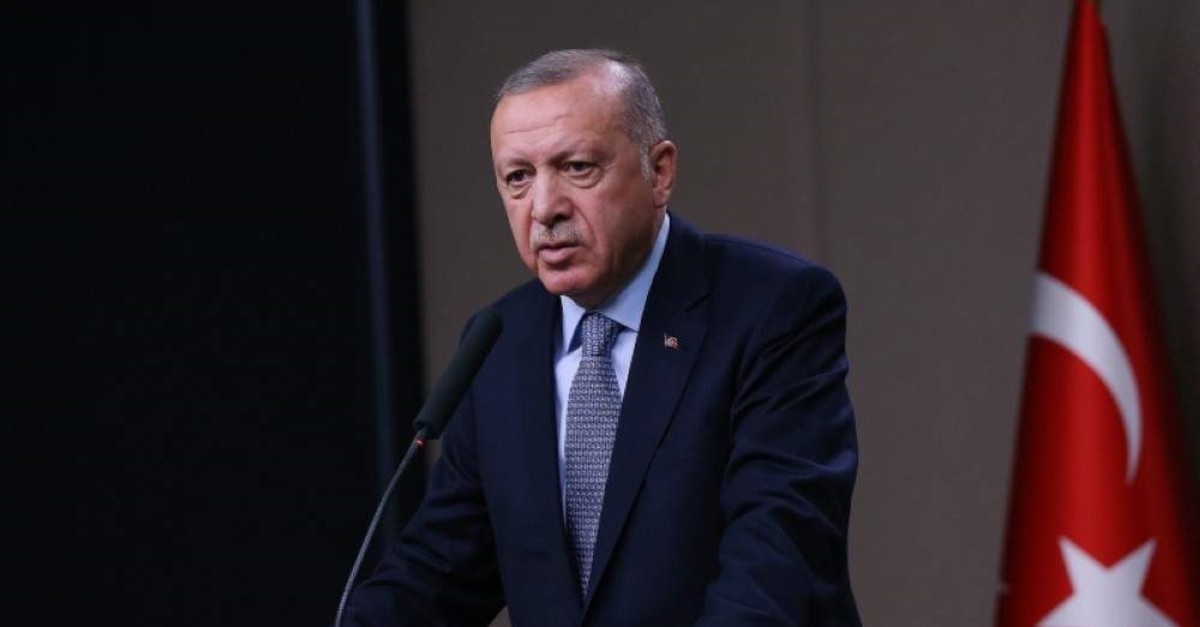 President Recep Tayyip Erdoğan criticized the U.S. House of Representatives for adopting a controversial resolution on 1915 events, as he slammed European countries for providing protection for PKK-linked groups to carry out their terrorist activities.

"From here I am addressing U.S. public opinion and the entire world: this step which was taken is worthless and we do not recognize it," he told the parliamentary group meeting of the Justice and Development Party (AK Party), adding that historians should decide on such matters rather than politicians.

"In our faith, genocide is definitely banned," he said. "We consider such an accusation to be the biggest insult to our people."

The president continued by saying that Turkey has been calling on Armenians to open their archives for research but the latter refuses because they don't have proof of their claims.

"Terrorist supporters, especially the ones in Europe, have carried out 700 acts targeting Turkey since the start of Operation Peace Spring," the president said, noting that European countries remained silent in the face of these attacks, although 79 of them directly targeted Turkish citizens and institutions and 36 Turkish civilians got injured.

Erdoğan noted that many of these countries are Turkey's NATO allies but allow these terrorists to carry out such acts under the supervision of the police.

He reiterated that all of these countries recognize the PKK as a terrorist organization, but fail to take action against their activities in their countries.

"The countries which recognize the PKK as terrorists allow its symbols on their streets while banning all pro-Turkey activities," he added.

Erdoğan called on European countries to take necessary measures against these terrorist groups before it is too late.

The president said Turkey's anti-terror operation in northern Syria was not a surprise, as the country has been reiterating its concerns about the terrorists near its borders for years now.

"This is a move to clear the region from the terrorist elements," he said.

Underlining that the area between Tal Abyad and Ras al-Ayn is under control as of now, the president expressed that this is not enough for Turkey.

Erdoğan continued by saying that Russia pledged to clean terrorists from Tal Abyad and Manbij and they claimed that they fulfilled their pledge, as the president expressed Turkey's desire to also clear Ayn al-Arab from terrorists and put the control of the area under Turkish forces.

The president noted that "the real owners of the region" will return to the areas liberated from terrorists soon.

He announced that Turkey and Russia will start joint patrols on Friday within 7 kilometers of depth, adding that if the attacks by the YPG continue, Turkey's paused operation would resume as well.

"If necessary, we can even expand the planned safe zone area," Erdoğan underlined.

"We sometimes receive questions like what will happen to terrorists who withdraw 30 kilometers away from our border. We will clean the area to the point that there will be no terrorist left," he further said.

Regarding meetings with European leaders, Erdoğan said that if there will be a meeting, it should be in one of the border towns or in Istanbul, unlike the leaders' suggestion, which is Berlin. He also announced that they will have meetings on Dec. 3-4, at the NATO leaders summit.