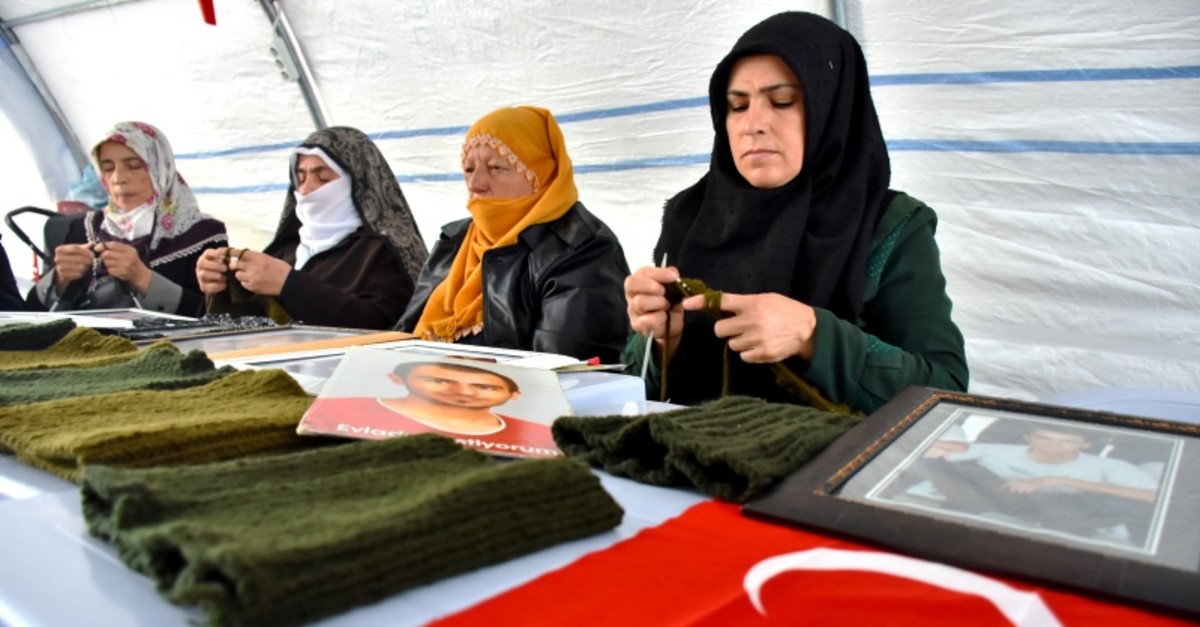 | AA Photo
by Daily Sabah with AA Nov 04, 2019 7:56 pm
At a protest outside the pro-PKK Peoples' Democratic Party (HDP) provincial office in the southeastern province of Diyarbakır, Kurdish mothers began knitting scarves to hand to Turkish soldiers participating in Operation Peace Spring, the country's counter-terrorism operation against the PKK’s Syrian wing, the People’s Protection Units (YPG).
İmmihan Nilifırka, one of the mothers - whose protest has entered its third month - claimed that they are knitting scarves for soldiers in order to protect them from the severe winter conditions. “We wished to contribute to their efforts,” she said.
Knitting has a long tradition in the history of Anatolian textiles and is used for various decorative and functional items with various techniques and uses that differ regionally and have evolved over time. Knitwear is presented as a gift on many occasions, such as during weddings when the bride prepares her dowry, when soldiers are sent off to war, or to greet newborn children.
The sit-in protests are seen as a reaction against the outlawed PKK, a terror group which has abducted and recruited their children, as well as the HDP, a political party which many of these families view as in league with the aforementioned group. The protest has continued since Sept. 3, with 55 families in total currently protesting, including five Iranian families whose children were abducted by the PKK's Iranian wing, the Kurdistan Free Life Party (PJAK). The protest started when Hacire Akar turned up at the doorstep of the HDP's Diyarbakır office one night. A week later, on Sept. 3, 2019, families inspired by Akar transformed her solo stance into a collective sit-in protest. Akar's son Mehmet returned home on Aug. 24, showing people that there is still hope.
Songül Altıntaş, whose son Müslüm was abducted by the PKK in the eastern province of Tunceli, while he was on the way to carry out his compulsory military service, said that Turkish soldiers have been struggling to protect their homeland. “We always stand with our soldiers,” she said.
Another mother, Halime Şehitoğlu, said that their safety would only be possible through the efforts of the soldiers. “May God protect them from any kind of malignity. If they feel cold, so do we,” she stated.
The mothers also performed a military salute in support of the Turkish army.
Turkey launched Operation Peace Spring, the third in a series of cross-border anti-terror operations in northern Syria targeting terrorists affiliated with Daesh and the YPG on Oct. 9.
The PKK – listed as a terrorist organization by Turkey, the U.S. and the EU – has waged a campaign of terror against Turkey for over 30 years, resulting in the deaths of nearly 40,000 people, including women, children and infants.
Last Update: Dec 20, 2019 1:26 am
RELATED TOPICS