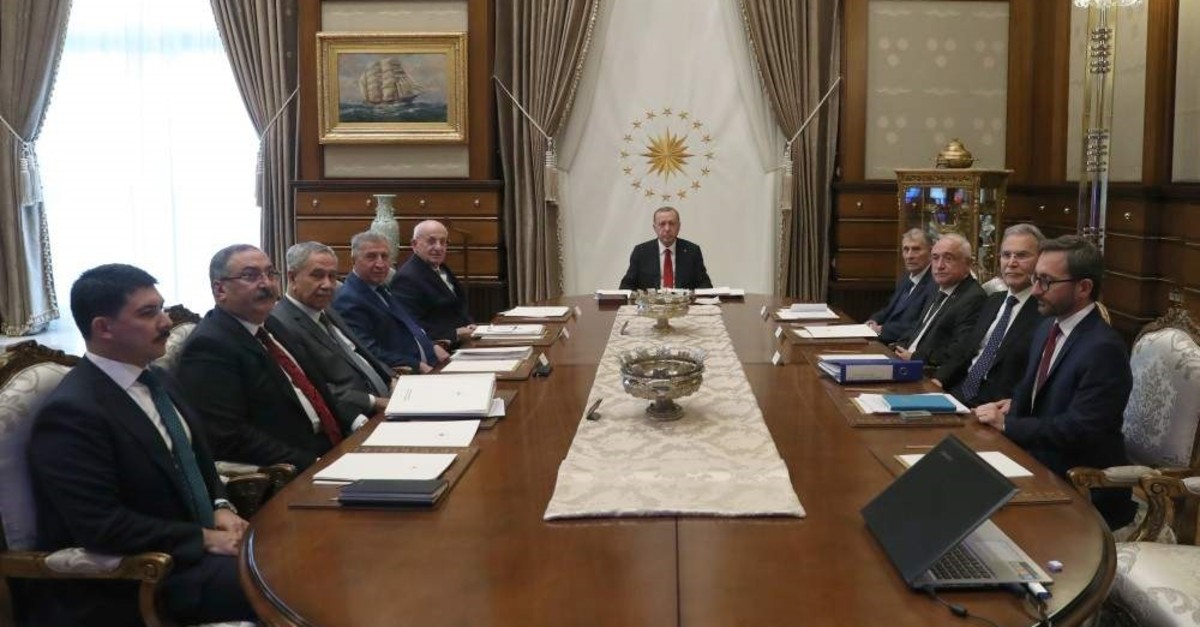 The high advisory board of the Turkish Presidency held a meeting under the chairmanship of President Recep Tayyip Erdou011fan in the capital Ankara, Nov. 5, 2019. (AA Photo)
by Daily Sabah with AA Nov 06, 2019 6:07 pm

The high advisory board of the Turkish Presidency held a meeting on Tuesday to discuss the regional and international reactions on Turkey's anti-terror Operation Peace Spring in Syria and its fight against the Gülenist Terror Group (FETÖ).

In the meeting, the board members emphasized that attitudes or behaviors that have the potential to weaken the struggle against FETÖ, the group behind the 2016 defeated coup in Turkey, will never be allowed.

In a statement following the meeting, Turkey's Communications Director Fahrettin Altun noted that the decisive struggle against FETÖ would never be compromised.
FETÖ and its U.S.-based head Fetullah Gülen orchestrated the defeated coup of July 15, 2016, which left 251 people killed and nearly 2,200 injured. FETÖ was also behind a long-running campaign to overthrow the state through the infiltration of Turkish institutions, particularly the military, police, and judiciary.
Many high-profile FETÖ supporters fled the country following the July 15 coup attempt and sought asylum in European countries, the U.S. and Canada. FETÖ has a considerable presence abroad, particularly in the U.S., including private schools that serve as a key revenue stream for the terror group.
The U.S. is home to a large community of Gülenists, including group leader Fetullah Gülen, who has lived in self-imposed exile on a secluded compound in the U.S. state of Pennsylvania since 1999. The United States is the target of most extradition requests. Turkey has sent seven extradition requests for Gülen to Washington but has seen little progress in his extradition.
Fight against terrorism underlined

Altun stated that the advisory board members emphasized Turkey has suffered the brunt of the refugee crisis and the country blocked individuals from heading to the region to join terrorist organizations.

"Turkey came face to face with accusations that it does not deserve and the heavy pressures on Turkey in the international arena increased with Operation Peace Spring," Altun added.
Since 2011, Turkey has received a constant flow of displaced Syrians fleeing the conflict and their numbers have expanded from mere thousands to millions.

Altun said the meeting discussed the use of strategic communication channels, soft-power elements and parliamentary diplomacy tools to inform the international community about Turkey's legitimate fight against terror and to battle the fiercest smear campaigns targeting the country.
Turkey launched Operation Peace Spring on Oct. 9 to eliminate terrorists from northern Syria east of the Euphrates River in order to secure Turkey's borders, aid in the safe return of Syrian refugees and ensure Syria's territorial integrity. Operation Peace Spring was the third in a series of cross-border anti-terror operations in northern Syria targeting terrorists affiliated with Daesh and the YPG.
The operation, conducted in line with the country's right to self-defense borne out of international law and U.N. Security Council resolutions, aims to establish a terror-free safe zone for Syrians return in the area east of the Euphrates River controlled by the U.S.-backed Syrian Democratic Forces (SDF), which is dominated by YPG terrorists.
Ankara later reached separate agreements with Washington and Moscow and pauısed its operation after YPG terrorists withdrew from a border strip inside Syria.
Since 2016, Turkey's Euphrates Shield and Olive Branch operations in northwestern Syria have liberated the region from YPG and Daesh terrorists, making it possible for nearly 400,000 Syrians who fled the violence to return home.
Turkey has long decried the threat from terrorists east of the Euphrates in northern Syria, pledging military action to prevent the formation of a "terrorist corridor" there.