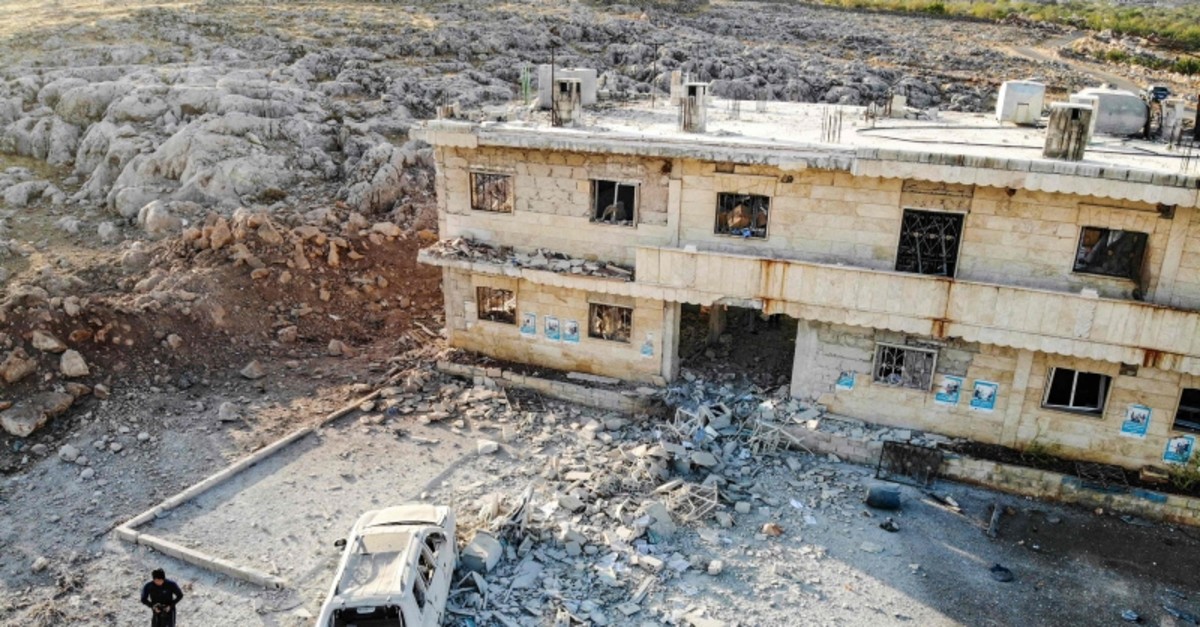 This picture taken early on November 6, 2019 shows an aerial view of a hospital that was reportedly hit by an air strike in the Syrian village of Shinan, about 30 kilometres south of Idlib in the northwestern Idlib province. (AFP Photo)
by Daily Sabah with AA Nov 06, 2019 1:15 pm

At least three children from the same family were killed and another injured in Russian airstrikes in the Idlib de-escalation zone in northwestern Syria, the Syrian civil defense agency said Tuesday.

According to the White Helmets, the casualties took place in Aldar Alkaberah village.

The death toll from the regime and Russian airstrikes on settlements in the Idlib de-escalation zone climbed to 12 over the past week.

Idlib, home to around 4 million people, is the last opposition enclave in Syria. President Recep Tayyip Erdoğan and his Russian counterpart Vladimir Putin reached an agreement in Sochi on Sept. 17, 2018, stipulating that the cease-fire in the Idlib region was to be preserved with the withdrawal of heavy arms and extremists from the region.

Despite eight months of relative calm provided by the Sochi deal, the regime, backed by Moscow, intensified its attacks starting on April 26 under the pretext of fighting the al-Qaida-linked Hayat Tahrir al-Sham (HTS) terrorists holed up in Idlib. Since then, the situation has gotten worse. More than 1,300 civilians have been killed in attacks by the regime and Russian forces in the de-escalation zone.

Hosting nearly 3.6 million refugees from Syria, Ankara often warns the international community and regional countries that a new offensive could trigger a fresh wave of refugees toward the West. Despite the risks of great refugee flows and a humanitarian crisis in general, the regime and its backers continue to terrorize the region.

The meeting in Sochi was part of the Astana process, which was held in Turkey in January 2017 to bring all warring parties in the Syrian conflict to the table to facilitate U.N.-sponsored peace talks in Geneva.