Regime attacks continue in Idlib despite developments in political solution 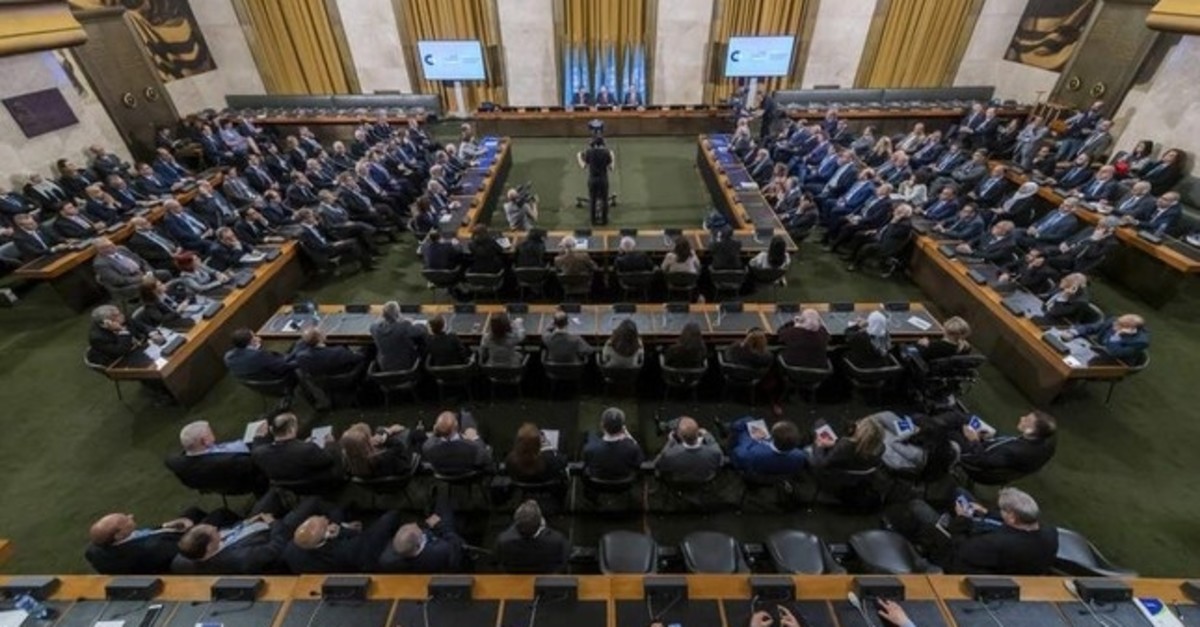 A general view during the meeting of the Syrian Constitutional Committee, at the European headquarters of the United Nations in Geneva, Oct. 30, 2019. (EPA Photo)
by Daily Sabah Nov 10, 2019 6:20 pm

Although the results of the first round of the Syrian constitution meetings in Geneva were acceptable, according to the Syrian opposition, there is still significant work ahead as regime attacks on northwestern Syria’s Idlib continue.

Evaluating the first round which was concluded Friday, the the head of Syrian opposition’s High Negotiations Committee (HNC) Naser al-Halili told Anadolu Agency (AA) that the opposition should be optimistic about the new beginning, adding that the 10-day discussions between the Bashar Assad regime and the opposition delegations on the constitution’s content can be regarded as positive signs.

“The outcomes of the first round can be considered as acceptable, according to my opinion, but we should continue our work,” he said.

The Syrian Constitutional Committee, which is seen as a historic step toward peace in Syria and has received great support from the international community, consists of a small and a large group. The latter one is made of 150 members, with 50 regime delegates, 50 opposition members and 50 civil society members chosen by the U.N. envoy to Syria, while the small group consists of the 45 members -15 from each side - and responsible for preparing and drafting constitutional reforms gathered. Some 75% of the large group’s approval is needed to reach a decision.

The committee has two co-chairs: Ahmad Kuzbari, a lawyer from the committee that drafted the previous constitution for the Syrian regime, and Hadi Albahra, former president of the Syrian Opposition and Revolutionary Forces National Coalition.

Al-Hariri also stressed that international support and strong will from both sides are needed to positively conclude the negotiations “to reach a comprehensive political solution.”

The launch of a process for a new constitution and the formation of the committee started at a conference in Russia in January 2018. Agreeing on the full list of members has taken over 18 months.

After Friday’s meeting, the U.N. special envoy on Syria Geir Pedersen said the initial meetings of the committee went better than most had expected and will meet again on Nov. 25.

"We have just concluded what I believe has been two weeks of successful discussions," Pedersen said in a press conference in Geneva. "And frankly, I believe that it has gone much better than most people would have expected," he added.

"The regime tries to make these efforts be in vain. However, it receives international pressure," said Mohammad Ahmad, the Turkmens member who is participating in the 45-member writing subcommittee, after Friday’s meeting.

Ahmad added that thanks to Turkey's diplomatic successes during Operation Peace Spring and the deal signed with Russia there is higher chance for achievement in the committee.

"Russia would be able to pressure the regime thanks to this deal, which would enable us to have achievements on the table," he said.

While there is ongoing progress with the constitutional committee, the Assad regime and its backers continue their attacks in Idlib province, causing the deaths of many civilians in recent strikes.

Some 75 civilians lost their lives in nearly 300 attacks last month. Among them, there were 13 children and 10 women while a further 162 civilians were injured; 32 of them children and 36 of them women. The Syrian Civil Defense Group, the White Helmets, published an October report on the attacks on the de-escalation zone.

Accordingly, the regime, Iran-backed groups and Russia carried out about 300 attacks with 3,557 artillery shells and rockets.

It was also reported that two civil defense volunteers died of attacks. Moreover, 284 houses were destroyed; one health center, one marketplace and two schools were targeted by land and aerial attacks.

The attacks continue despite the risks of great refugee flows and a humanitarian crisis in general. Since the Sochi agreement was inked last year, nearly 750,000 civilians have been displaced during violations of the cease-fire. 1,864 people died this year so far in Syria, 468 of them children and 406 women, according to the Syrian Network for Human Rights (SNHR). Furthermore, 159 people died through torture while 2,460 arbitrary arrests were recorded.

Syria has been locked in a vicious civil war since early 2011, when the Bashar Assad regime cracked down on pro-democracy protests with unexpected ferocity. Since then, hundreds of thousands of people have been killed and more than 10 million others displaced, according to U.N. numbers.