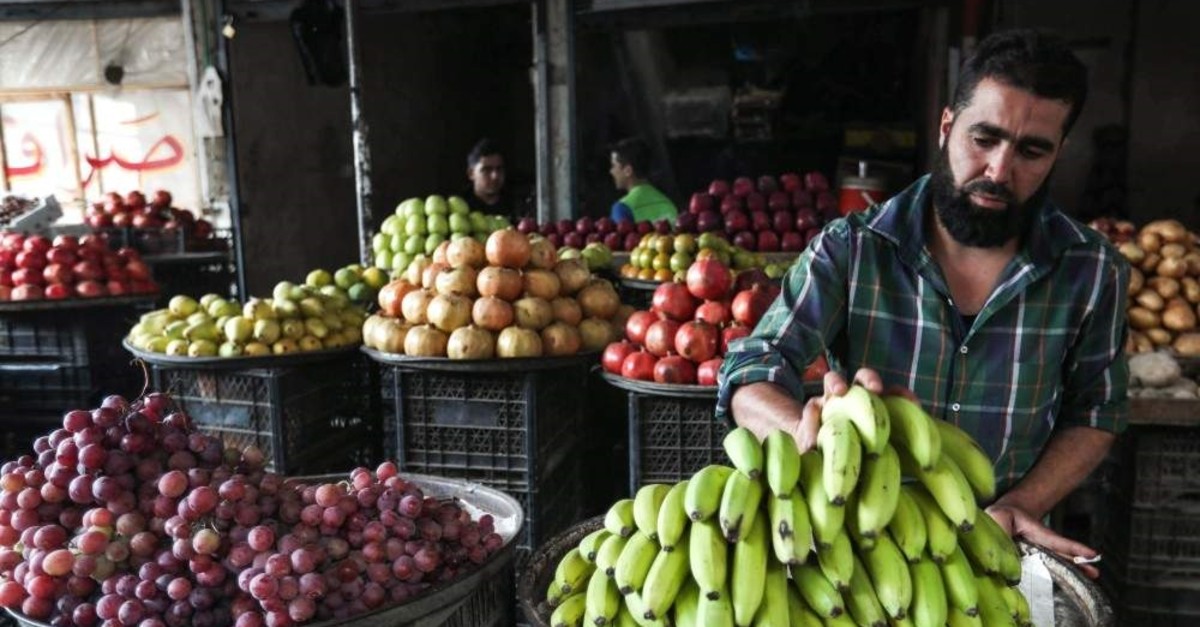 A SYRIAN FRUIT MERCHANT ORGANISES BANANAS OUTSIDE HIS SHOP IN THE REBEL-HELD TOWN OF MAARET AL-NUMAN, IN THE NORTH OF IDLIB PROVINCE ON SEPTEMBER 27, 2018. (Photo by OMAR HAJ KADOUR / AFP)
by Dilara Aslan
Nov 14, 2019 11:35 pm

Significant changes are happening on the ground in Syria as all parties of the Syrian war have finally sat together at the table with the formation of the constitutional committee. A solution to the 8-year ongoing conflict in the country is long overdue but with these steps, the main aim is to come up with concrete solutions. As a result of this political process, stability is hoped to be reached and the initiation of reconstruction efforts will get underway.
“A safe atmosphere has been created far from the oppression of the [Bashar Assad] regime and terrorist organizations in order for the people to be able to return as soon as possible and live with dignity,” the head of the Syrian Interim Government Abdurrahman Mustafa told Daily Sabah yesterday in Ankara, adding that local councils have been established with the participation of the local people that will represent them.
Yet, the head of the interim government further stressed that even though a lot has been achieved, there is still a lot to do.
“When the [People's Protection Units] YPG occupied areas, they made demographic changes. Now local councils are being established which represent all people of Syria,” Rami al-Dush, president of the Syrian Tribes and Clans Council, explained in an event in Ankara yesterday focusing on the war-torn country’s reconstruction. He added that the safe return of Syrians will take place under the auspices of the U.N.
After the temporary local councils’ establishment, the interim government aims to reach an atmosphere where real elections can be carried out. It was also pointed out that those participating in the council are expected to be local people, with no affiliations with terrorist elements and each member must have a university degree and good morals.
Besides for the local councils, the restoration of hospitals that were destroyed by terrorist organizations and/or lacking equipment is being launched. A hospital with the capacity of 200 beds is serving people in the town of Çobanbey (Al-Rai) whereas locals from Ras al-Ayn are able to receive treatment at Viranşehir State Hospital in the Turkish southeastern border province of Şanlıurfa. Efforts to rebuild the towns' infrastructure, as well as health and educational institutions, proceed as schools are being renovated and hospitals are being amended. The United Nations, on the other side, estimates the cost of reconstruction at about $200 billion, which is about four times Syria’s pre-war GDP.
Educational activities, vocational schools, and education have been particularly prioritized in northern Syria. For example, in Jarablus city center and its surrounding villages, a vocational college, four high schools, 12 middle schools, 98 elementary schools, and an educational center have been opened.
“The continuity of all relevant agreements is the beginning of the reconstruction of Syria,” Mustafa said.
Regarding the political process, the key for stability and reconstruction, Mustafa stated, “As the opposition, we have believed for 30 years that the solution has to be political, but the regime and its allies try to gain land by military means,” while al-Dush added that the pressure of Russia on the regime was a key factor in including the regime in the political solution process.
Pressure from international stakeholders, starting with Russia, Turkey and Iran, makes it more likely that the committee will function effectively. What all parties agree on, for now, is the need to preserve Syria's territorial integrity and political unity. It is also noteworthy that this middle ground is an important starting point for Syria's new constitution, yet Mustafa stressed that this is “just the first step toward a solution and not enough on its own.”
The regime's uncooperative stance has been known for a while now, whereas opposition members look for an entirely new constitution, which might cause a change in the country's leadership. The regime demands only some changes be made on the already existing constitution.
Terror groups determined to hinder return of Syrians
“The PKK behaves like Daesh, attacking civilians to hinder them from returning in Syria,” al-Dush stated, referring to the many attacks it has conducted and still continues to conduct on civilians.
“This propaganda and attacks aim to hinder people from returning to their homes because they changed the demographic structure there and displaced people. With Daesh’s technique, they have carried out attacks with bomb-loaded vehicles,” the head of the interim government said.
On Nov. 10, a car-bomb attack by the terrorist group took place in Tal Abyad, killing nine and injuring 30 others. The bombing in Tal Abyad's Suluk town, which is one of the largest settlement areas in the region, caused massive harm to civilians and damaged buildings.
Tal Abyad was cleared of terrorists as part of Operation Peace Spring on Oct. 13. Since then, locals have gradually returned with humanitarian aid being provided with the help of the Turkish Armed Forces (TSK) and the Turkish Red Crescent (Kızılay).
The terrorist organization also continues harassment fire toward the Turkish military and Syrian National Army (SNA) fighters; so far at least 198 SNA soldiers have been killed by the YPG, which is the PKK's Syrian offshoot.
Saying that Operation Peace Spring opened the way for displaced people to return, Mustafa continued, “The most significant issues on the agenda are Operation Peace Spring and the political process in Syria. The safe atmosphere that has been established thanks to the efforts of the TSK and the FSA (Free Syrian Army), has enabled forcefully displaced people to return and has diminished the dark propaganda of the terrorists.”
Last Update: Dec 20, 2019 1:41 am