Turkey cares about Syrian people, not the oil, Erdoğan says 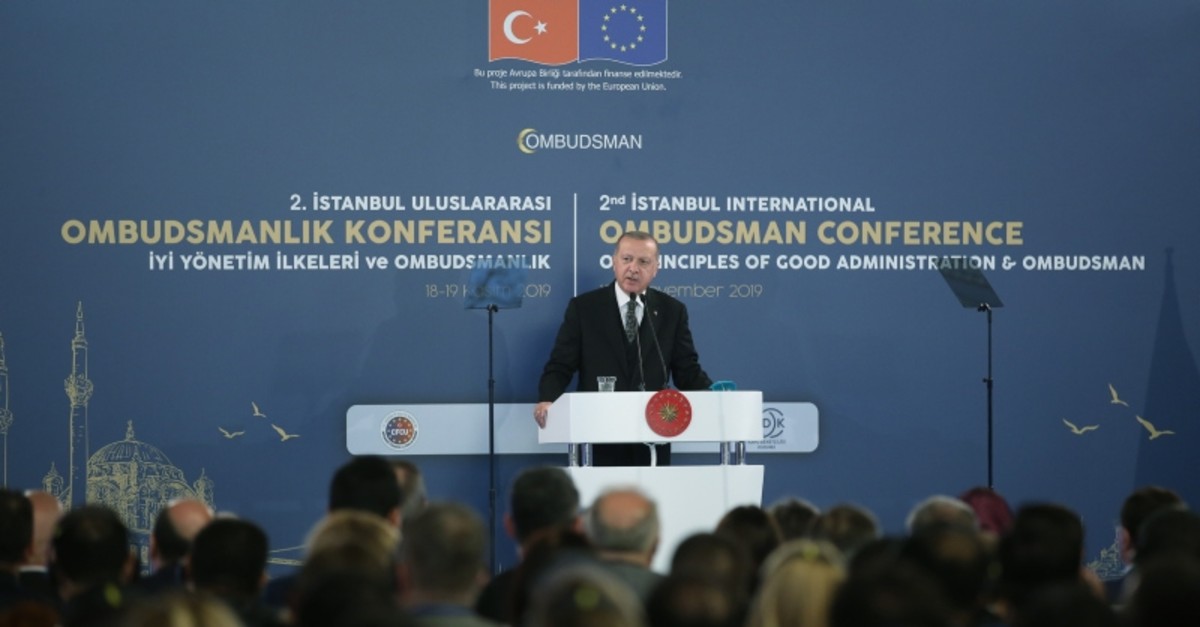 Turkey cares about the people, not the oil and will never force the persecuted refugees to return to Syria, President Recep Tayyip Erdoğan said Monday, as he criticized the main opposition Republican People's Party (CHP)'s stance regarding migrants.
Speaking at the 2nd International Ombudsman Conference in Istanbul, Erdoğan highlighted Turkey's humanitarian motive in Syria as he reassured Syrians who sought refuge in Turkey that the country will not force them to go back, contrary to CHP's insistence to do so.
The CHP administration and deputies including Chairman Kemal Kılıçdaroğlu have long voiced that Syrians should return or be forced to return to their home country. Turkey is home to more than 3.5 million Syrian refugees under temporary protection status along with some 72,000 others granted Turkish nationality. An additional half a million migrants, mainly from Iraq, Iran and Afghanistan, are also present in the country. Since the outbreak of the Syrian Civil War in 2011 and its spread to Iraq, millions of others are estimated to have crossed from Turkey to Europe and other destinations, especially during the height of the refugee influx in 2015.
"Turkey will never force persecuted people who fled barrel bombs in Syria to go back," Erdoğan said, adding that Turkey cares about the people, not the oil.
He noted that some countries are in the "process of sharing the oil reserves" in Syria and have offered Turkey to be a partner, but Ankara refused because it is not interested in the country's resources. He did not mention the name of the countries that proposed Turkey to get a share of the oil.
Other Turkish officials, including Foreign Minister Mevlüt Çavuşoğlu, have openly criticized foreign powers for laying claims to the natural resources of Syria, in response to U.S. President Donald Trump, who publicly acknowledged that the main goal of deploying additional troops was to protect the Syrian oil reserves.
Erdoğan reiterated once again that Turkey is hosting 4 million Syrian refugees and has received 3 billion euros in assistance from the European Union.
Touching upon Turkey's determination to thwart all threats against its security, Erdoğan said the country is striving to ensure regional and international peace.
"We do not just keep terrorist organizations away from us but we also destroy them in their source. We are struggling against all terrorist organizations that pose a threat to our country and the world, including Daesh, al-Qaida and PKK/YPG," Erdoğan said.
The president also said highlighted the importance of the bond between the people and their states, noting that countries unable to establish strong ties with their citizens are more vulnerable to domestic and foreign interference.
"It is not possible to bring down a country embraced by the people," he said, adding that countries that have turned a deaf ear to the demands of their people have faced significant destruction.
"In our region, there are many countries and administrations which are making this grave mistake," Erdoğan said, as he noted that Turkey is an exception because there is a strong bond between the state and the people, which has enabled the country to stand up tall in the face of yearslong economic, terror attacks and other threats.