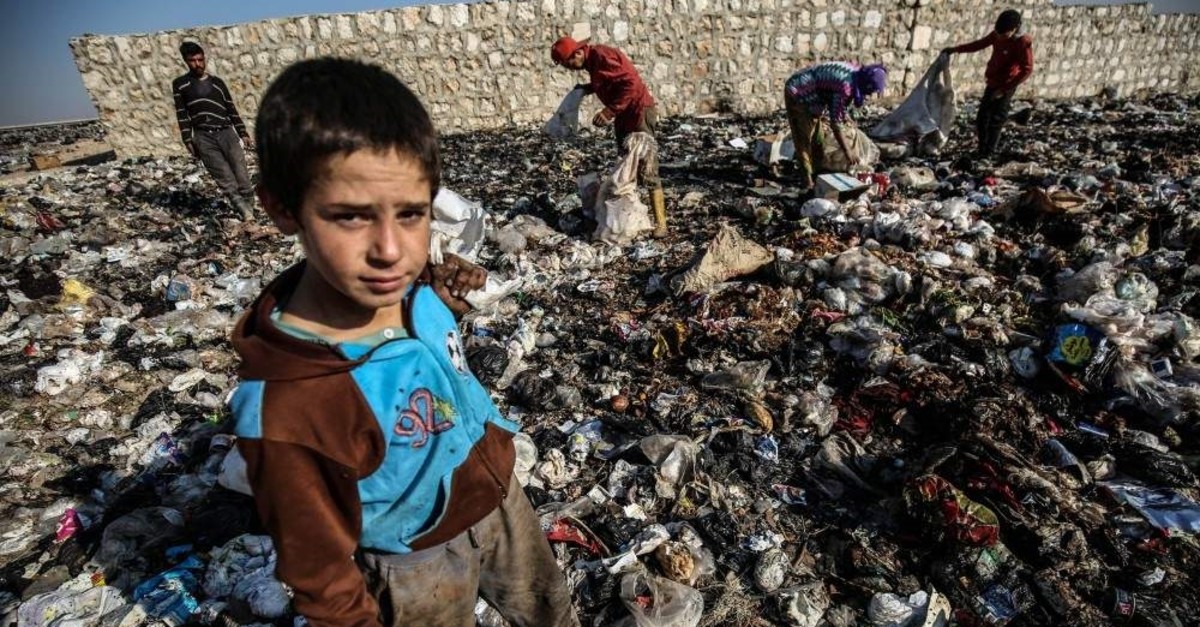 The eight-year Syrian civil war continues to be brutal for those stuck in the turmoil as children in northwestern Idlib province are forced to make a living picking garbage dumps – a stark contrast to their peers around the world.

The deaths of family members responsible for earning a livelihood compel Syrian children suffering from financial problems to drop out of school and work in unhealthy conditions to contribute to their family budget.

The town of Sinjar, which was captured by regime forces with Russian air support, children are trying to financially support their families by working in garbage dumps. One of those children is Muhammed Asmar, who under normal circumstances should have been in the sixth grade.

"I don't like this job at all. I want to learn. There are schools up to the fourth grade in our region. Other schools are far from where we live. There is no vehicle to reach there," Asmar, who has been working for two and a half years to assist his family, told Anadolu Agency (AA) reporters.

Another child worker, 8-year-old Ganim Ahmad, said he earns 600 Syrian pounds a day from this work. Ahmad is illiterate since he never had the chance to go to school. "My cousin and I go to work every day at 10 in the morning," he said.

Living in a camp with his family near Idlib, 18-year-old Ali Hilal is older than the other boys at the garbage dump. He used to sell bread and vegetables. He quit since he was barely making any profit.

“Every day I come here at seven in the morning and collect pieces of steel. On my best day, I earn 1,000-1,500 Syrian pounds. Yet, I can barely afford to buy bread,” he said of his current job.

Acknowledging the dangers of the job, Hilal said he has to take care of his injuries by himself at home.

“I am somehow managing the treatment of my injuries by myself at home. What else can I do? I have to work to earn for my family,” he said.

School being built in Idlib

Several humanitarian organizations are building a school in the war-torn province under the name of a former, late prime minister of Turkey, Necmettin Erbakan.

Being built through the joint work of humanitarian organizations South Africa based Ashrafül AID and the Humanitarian Relief Foundation (İHH), the school will have six classrooms to serve a total of 200 students.

Underlining that the children in the region are lacking education due to the insufficiency of schools, Semih Tosun, İHH’s Syrian works’ media head, reiterated that the organization has been building schools in many provinces in Syria, but the number is still too low.