Turkey to become most essential country for Syrian students' future 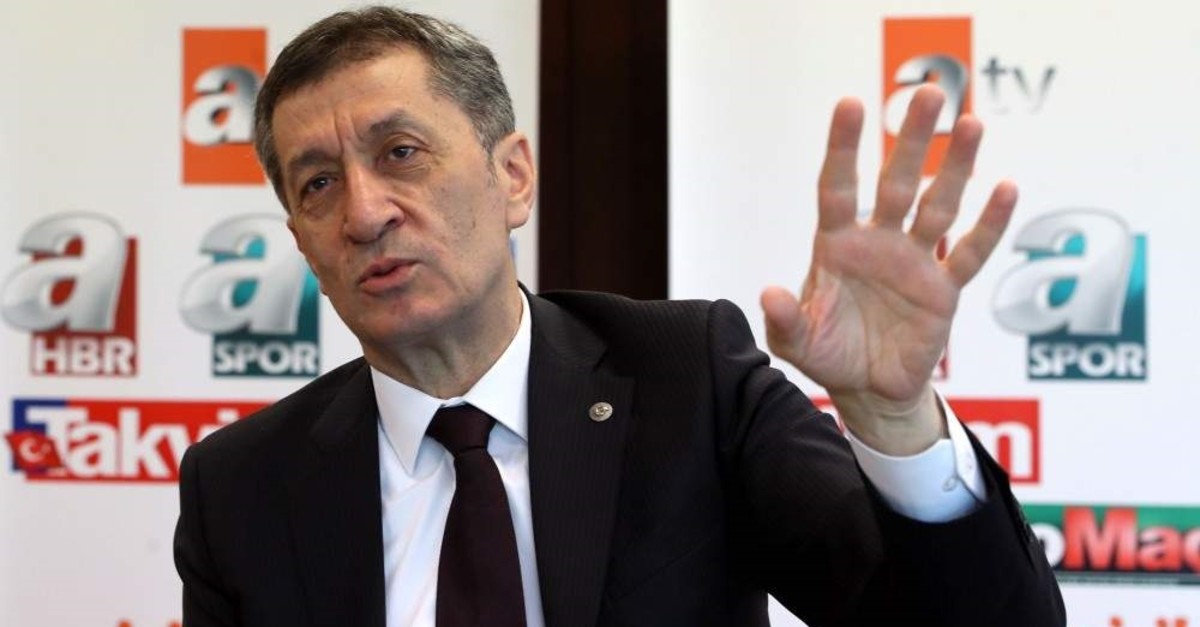 Turkey, as the country that hosts the most refugees in the world, has taken major steps and conducted projects in integrative policies, especially when it comes to education by enhancing the capacities of school buildings and supporting the continuation of incentive mechanisms

Education is not only a basic right for Syrian children but also a vital issue for refugees to help overcome the difficult times they have lived through and be able to build their future, Education Minister Ziya Selçuk said, indicating that the ministry has taken great steps in education for refugees since their arrival.
In an exclusive interview with Daily Sabah, Selçuk underlined that Turkey, as a reflection of its historic mission, opened its doors to Syrians that had to flee their country. Selçuk pointed out that nearly 4 million of the 5.5 million Syrian refugees that had to leave their country are in Turkey.
The minister said that EU and international funds received so far have assisted with the education of Syrian refugees in Turkey and need to continue to help share the burden.
“Considering the population density in our country, it is vital that the international community provides support to share the burden,” Selçuk said.
“Furthermore,” he added, “the EU has signed the second package of 3 billion euros. Yet, the part designated for education from this fund is 500 million euros.”
The fact that the number of Syrian students of school-going age is more than 1 million, the minister said that enhancing the capacities of school buildings and supporting the continuation of incentive mechanisms, such as the Conditional Education Aid Towards Foreigners (YŞEY), to facilitate education is important.
More than 1 million Syrian students
While Turkey is hosting the greatest number of Syrian refugees in the world, it is home to 1,082,172 Syrian students that are at the age to receive education and under temporary protection. According to the data of the Education Ministry as of November 2019, some 684,728, or 63.27%, of students under temporary protection are included in the education system, while the student’s enrollment procedures continue.
The schooling rate of students studying at official schools and temporary education centers according to their stages of education is 30,678 (27.19%) for preschool, 341,325 (89.27%) for elementary school, 224,365 (70.50%) for secondary school and 88,360 (32.88%) for high school. The highest schooling rate of Syrian students getting their education in Turkey is at the elementary school stage, and the lowest is at the preschool level.
Selçuk said that the reason why schooling is low at the high school level is that students prefer to work to support their families due to economic reasons. The minister indicated that efforts are being made to support the vocational development of Syrian students in high school and to direct them primarily to vocational education with the aim of enhancing access to the labor market.
Within the framework of the Turkey-EU Joint Action Plan and the “EU Facility for Refugees in Turkey-FRIT,” 6 billion euros in total, allocated in two parts of 3 billion euros, were given to meet the needs of Syrians in Turkey.
While the first part of this fund (FRIT I) was given to the EU Turkey Delegation, the distribution of this fund was to be made by Dec.31, 2017. Within the scope of FRIT I, a total fund of 795 million euros, including IFI deductions, were given to the Education Ministry. The ministry carried out projects of constructing schools costing 445 million euros, vocational and technical education costing 50 million euros and the PICTES I project, which has a budget of 300 million euros of direct grants for three years.
Within the scope of FRIT II, on the other hand, 400 million euros as a direct grant for three years for the project PIKTES II and 100 million euros as a fund for the construction of schools was reserved for the Education Ministry bound to the total amount of the education sector.
Again, the Education Ministry is carrying out projects and works with the cooperation of international institutions and nongovernmental organizations to help Syrian students of school age. Foreign government funds are planned according to the needs of Syrians under temporary protection determined by the ministry with the cooperation of U.N. institutions.
Consultancy services for education
The minister also mentioned that Turkey has been looking after the education of Syrians in regions under Turkey’s control and in operation regions. Selçuk stated that the ministry continues to provide consultancy services in all matters concerning education, including books, the selection of teachers, services, administrative training and help for high school finals in Afrin and in the Operation Euphrates Shield and Operation Peace Spring regions.
Turkey's efforts to normalize the northern Syrian regions liberated from the PKK's Syrian affiliate, the People's Protection Units (YPG), and Daesh terrorists have enabled citizens to return to their everyday lives, with schools and hospitals reopened and roads built. Since Turkey's anti-terror Operation Peace Spring launched on Oct. 9, the liberated areas of northern Syria have been put back on the path to normalization with the start of reconstruction work.
Furthermore, at the end of 2018, Turkey opened nine schools in Syria’s northwestern Azaz district, which had been liberated from terrorist elements by the Turkish military. In line with a protocol signed in coordination with the Disaster and Emergency Management Authority (AFAD), the governor's office in the southern province of Kilis and Pakistan-based Baitussalam Welfare Trust opened schools offering a total of 130 classrooms in the al-Iman camp of Azaz. Turkey also established vocational training at public education centers to revive the workforce.
Last Update: Dec 20, 2019 1:52 am
RELATED TOPICS