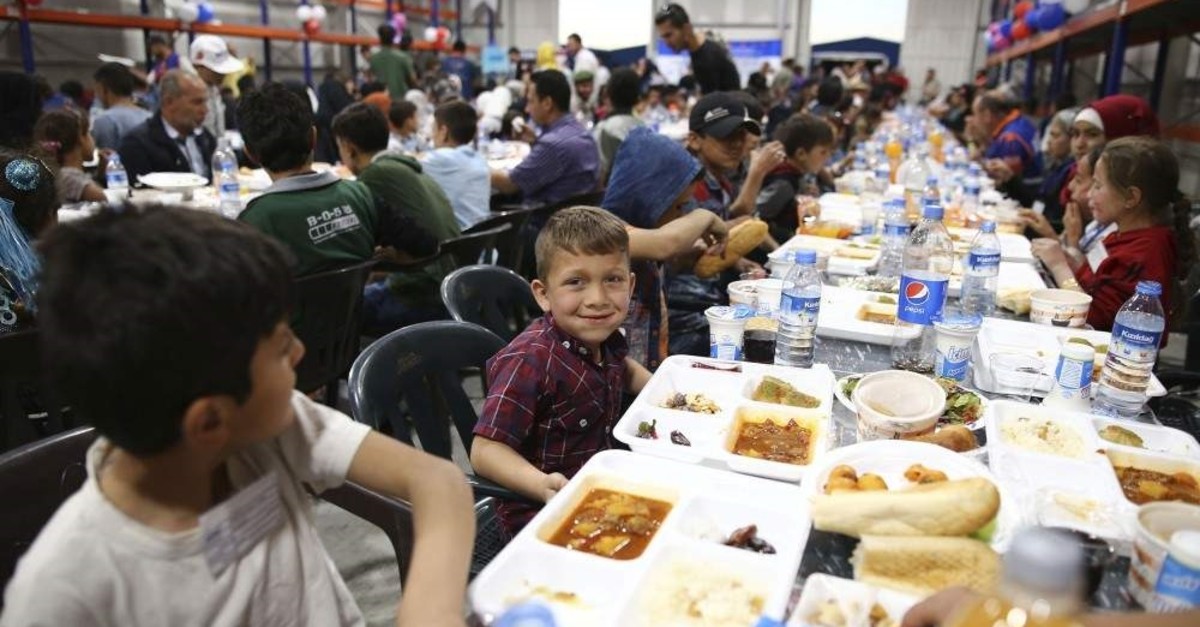 Syrian refugee children having dinner hosted by Turkey's AFAD in an area liberated as part of Operation Euphrates Shield in this undated photo (Sabah File Photo)
by Daily Sabah Nov 25, 2019 11:53 am

The president of Germany’s Federal Office for Migration and Refugees (BAMF) praised Turkey’s migration policies, saying that the country’s acceptance of millions of refugees deserves recognition.
“Turkey is a reliable partner in migration policy,” BAMF President Hans-Eckhard Sommer, who has been leading the institution since 2018, said Saturday. He noted that the country had not changed its migration policy and has accepted over 3 million refugees fleeing the conflict in Syria. Sommer also noted that there is no evidence to show Turkey was forcefully sending Syrians back to their country. His comments come in response to claims by countries which opposed Turkey’s anti-terror operation in northern Syria that Syrians would be forced to inhabit the safe zone opened up as a result.
Ankara has consistently underlined that Operation Peace Spring, like its predecessors, aims to clear the region to facilitate the safe and voluntary return of Syrians to their homes. Turkey carried out two previous cross-border operations west of the Euphrates River, Operation Euphrates Shield launched in August 2016 and Operation Olive Branch in January 2018, to drive terrorist groups, including the People's Protection Units (YPG) and Daesh, from its borders.
Turkey's efforts to normalize regions liberated from the presence of the PKK's Syrian affiliate People's Protection Units (YPG) and Daesh terrorist organizations, have enabled citizens to return to their everyday lives, with schools and hospitals reopened and roads and bridges reconstructed. Since Turkey's anti-terror Operation Peace Spring launched on Oct.9, the liberated areas of northern Syria have been put back on the path to normalization thanks to reconstruction efforts.
After launching three consecutive operations in northern Syria, Turkey rolled up its sleeves to rebuild hospitals, schools, mosques and roads destroyed by the YPG.
Turkish officials have announced that 365,000 Syrians have already returned. According to Turkey's safe zone plan, 140 villages and 10 district centers will be established across an area 30-40-kilometers-deep into northern Syria. The settlements will house 5,000 and 30,000 inhabitants each, respectively. The settlements will include various amenities to meet their new inhabitants' every requirement. Each village within the area will have 1,000 houses, and each district 6,000 new homes built, forming a total of 200,000 new residences. The construction is expected to cost around $26.6 billion.
Interior Ministry figures say the number of refugees in Turkey was 4.2 million in 2017, but has since reached 4.9 million. Ankara has spent nearly $40 billion on accommodating refugees, having received only 6 billion euros ($6.6 billion) of assistance from the international community.
Last Update: Dec 20, 2019 1:54 am
RELATED TOPICS