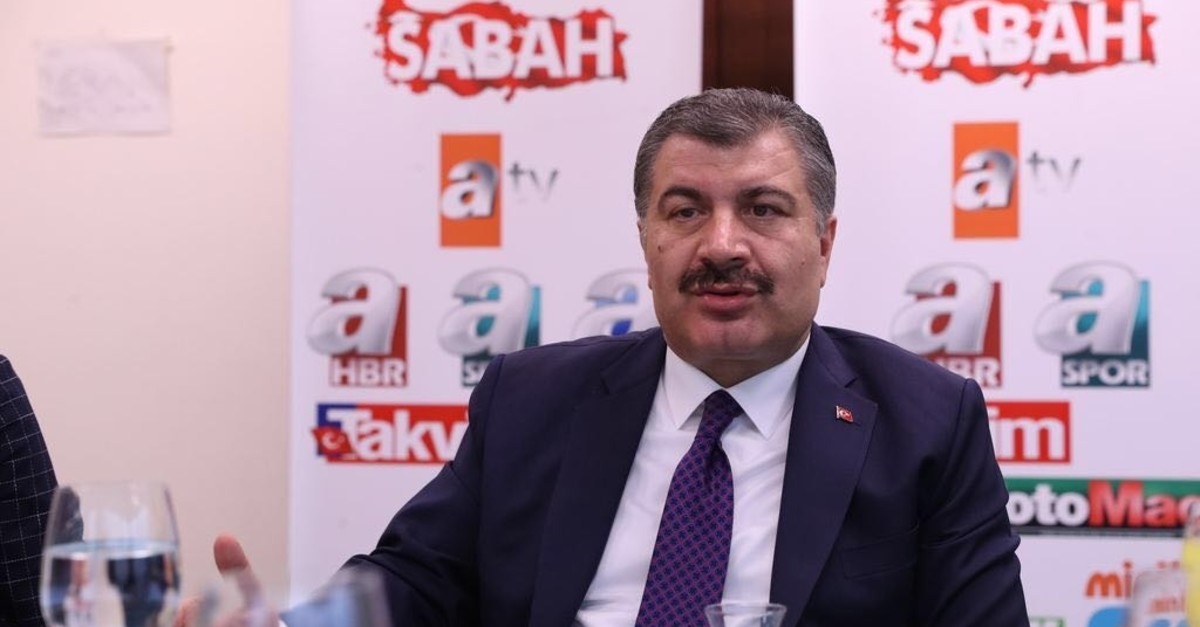 Health Minister Fahrettin Koca on his visit to Turkuvaz Media representatives on Nov. 27, 2019.
by Nur Özkan Erbay Nov 27, 2019 6:27 pm
Indicating that Turkey had entered a new phase in its efforts to render Turkey a health care hub in line with Turkey’s 2023 goals, Health Minister Fahrettin Koca stated that Turkey would open a series of diagnostics centers and health offices in various locations across the world throughout the course of 2020.
"We will have health attaches in countries we have set as targets for the coming phase. What we actually want to do, in this context, is to establish advanced diagnostics centers in the target countries. In other words, we will do what no other country which has a share in health tourism has done before," the minister said.
Koca, speaking to Turkuvaz Media Ankara representatives, said “The preparations are completed. We will open these centers, which aim to boost health tourism, to deliver patients for treatment in Turkey from Russia, Azerbaijan, Georgia, Europe, Turkic nations, the Balkans and Africa. The first center is to be opened in Russia, the building has been hired.”
“A patient who has been treated in Turkey and returned to his country will not feel abandoned in terms of treatment. The necessary checks will be made in these countries. Turkey will provide foreign patients with an element of safety internationally,” Koca continued, adding that these diagnostics centers would also operate as to regulate relations between Turkey and countries where the centers are found in terms of health.
Indicating a desire to open diagnostics centers that would regularly carry out follow-ups and checks for once patients treated in Turkey have returned to their countries, Koca emphasized they would be planning the setting up of a foundation that could work with the dynamism of the private sector and that is a public property under the title of International Health Services Inc. (USHAŞ).
A subsidiary of the Health Ministry, USHAŞ was established to promote Turkish health tourism abroad. USHAŞ commenced its operations in February this year. Around 551,748 tourists visited Turkey for health-oriented services last year, an increase of 27.3% compared to the previous year, according to Turkish Statistical Institute (TurkStat) data. Koca earlier said Turkey's revenue in health tourism has reached $1.5 billion and that they aimed to increase this revenue five times by 2030. Health tourists choose Turkey for a variety of reasons, including price, quality, technical conditions, short waiting periods and high-end facilities. Turkey holds a prominent place in the treatment of cardiovascular diseases and organ transplants as well as dental care and plastic surgery.
Koca, who stated that another project of Turkey in the field of health would be for “Perfection Centers” to be deployed in specific hospitals, explained that at these centers would invite the expertise of specialists that have pioneered in their fields and invite figures from leading international universities and health centers to expand on their experience. “These centers will also be units aiding to Turkey’s recognition internationally in the health care field,” Koca underlined.
Emphasizing that Turkey’s earnings in the health care sector surpassed $1.17 billion in 2018 – a rise of 32% – the minister further stated that 48.5% of exported health products were domestically produced. “Our export numbers will further rise next year,” Koca said.
The number of people coming to Turkey within the scope of health tourism was 331, 724 in 2016, 434,583 in 2017, 553, 527 in 2018 and 647,500 this year so far.
Koca, who also delivered good news concerning rare diseases and autism, announced the establishment of a Head Department of Rare Diseases, which will go to work within a number of weeks. "It will provide all kinds of work, application, supporting services, from theory to practice, regarding rare diseases and autism."
In recent years, Turkey has achieved significant momentum in health care tourism with improved services featuring cutting-edge technology, competent staff and affordable prices. Turkey now seeks to create its own trademark in health care tourism and the relevant process has started according to Koca.
Last Update: Dec 20, 2019 1:58 am
RELATED TOPICS