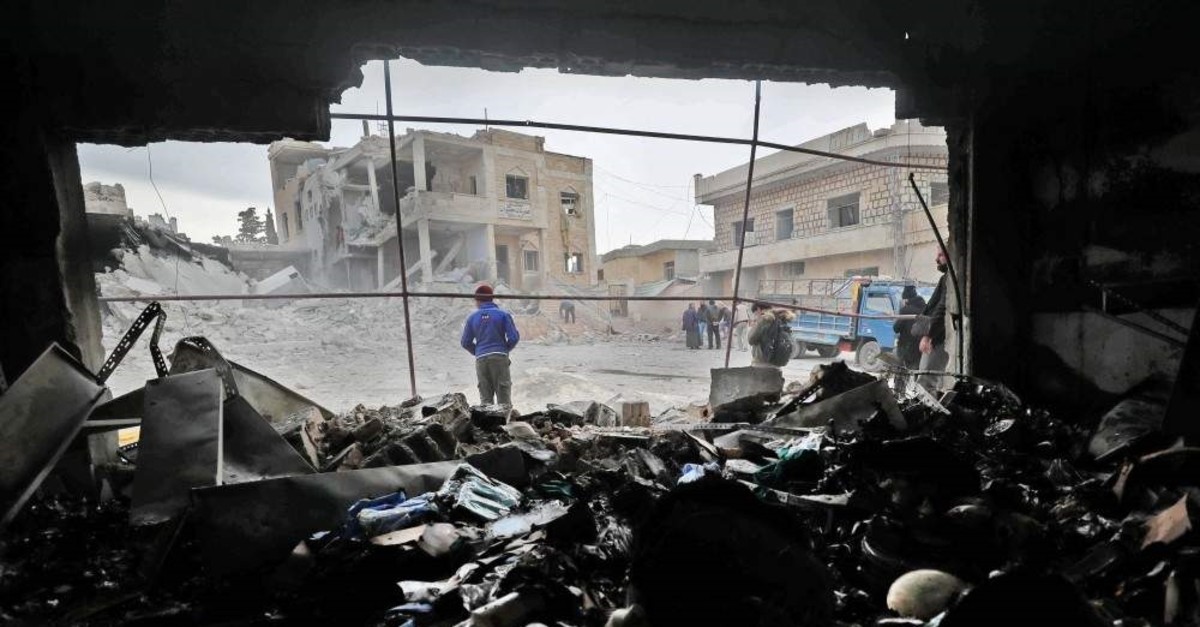 Children in northwestern Syria’s Idlib are surviving in the war-torn province by digging the graves of the civilians killed in Syrian regime attacks.

Two young brothers Rahih and Abdulkadir Elshik have no chance of survival other than earning money digging graves. The circumstances in Idlib and the constantly rising death toll forces them to work in such a profession rather than going to school.

The deaths of family members responsible for earning a livelihood compel Syrian children suffering from financial problems to drop out of school and work in unhealthy conditions to contribute to their family budget.

Born in a town in northern Hama, the brothers had to leave their hometown due to regime attacks and moved to Idlib. However, the regime did not let them live in peace in Idlib either, heavy damaging their school and forcing them to drop out and look for basic means of survival.

“Our monetary situation is an account in debit. With my brother, we are trying to support our family by helping each other in our job,” said Rahih, adding that for each grave they dig they earn $4.

“We feel like foreigners when we see most of our peers going to school,” he added, acknowledging that the job is not suitable for a child and yet, they still have to do it to take care of their family.

According to Abdulkadir, although the job was hard for them at first, they got used to it in time.

“When we first started digging with my brother, it was very difficult for us. In a day, we were only able to dig half of a grave. We were continuing the other half the next day. But now, we are quicker and we are supporting our family. Still, while other children are going to school with their bags, we can’t,” the little boy said.

In the last two months alone, more than 500 people, 130 of whom are children, were killed in Idlib by the attacks of the regime and its supporters.

Apart from the civilian casualties, the attacks also cause heavy damages to the buildings. While many schools in the region are now in an unusable situation, the others are being used as shelters. Because of this situation, out of 650,000 students in the region, only 300,000 are able to pursue their education.

A teacher in Idlib, Ahmad Halak, said that a generation has been lost in the region because of financial difficulties caused by the civil war.

“People had to make their children work in heavy jobs due to financial difficulties. There are children who cannot go to school because of that,” he said.

Hala Obaidan, the representative of the Idlib Child Protection Organization, on the other hand, underlined that many school buildings are damaged and need to be reconstructed in order to host more children.

The de-escalation zone is currently home to some 4 million civilians, including hundreds of thousands displaced in recent years by regime forces throughout the war-weary country.

Previously, it was reported by Anadolu Agency (AA) that children in Idlib were forced to make a living picking garbage dumps.

"I don't like this job at all. I want to learn. There are schools up to the fourth grade in our region. Other schools are far from where we live. There is no vehicle to reach there," Asmar, who has been working for two and a half years to assist his family, told AA reporters on Nov. 19.

Another child worker, 8-year-old Ganim Ahmad, said he earns 600 Syrian pounds a day from this work. Ahmad is illiterate since he never had the chance to go to school. "My cousin and I go to work every day at 10 in the morning," he said.