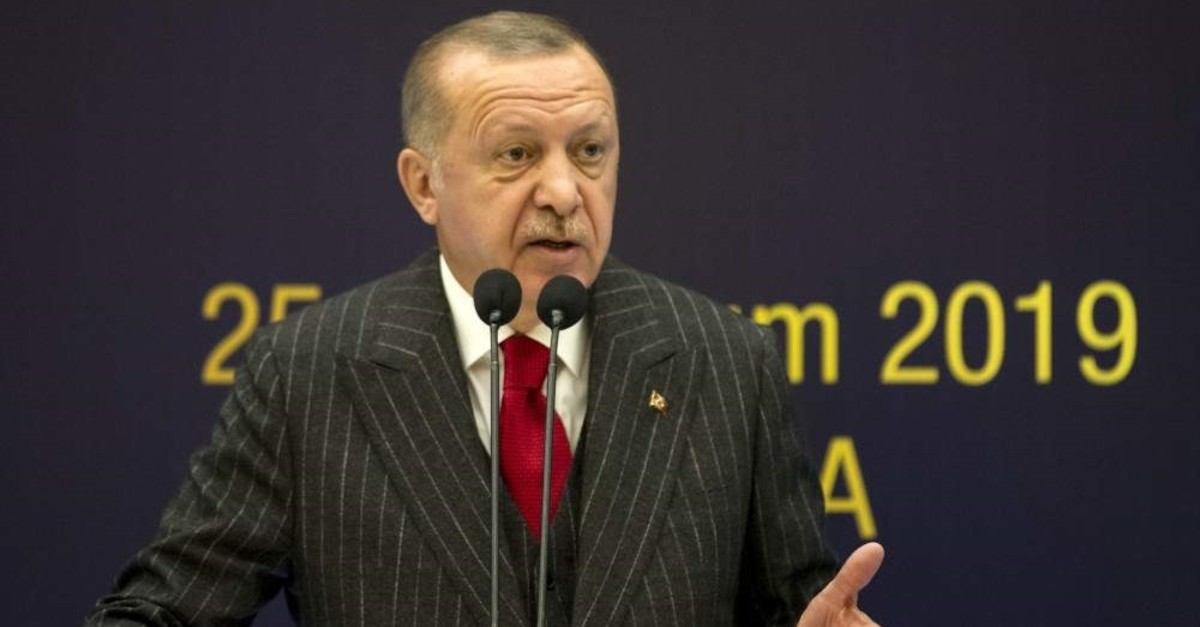 President Recep Tayyip Erdou011fan addresses the sixth Religious Council, Ankara, Nov. 28, 2019. (?HA Photo)
by Daily Sabah with AA Nov 28, 2019 6:58 pm
Turkish President Recep Tayyip Erdoğan lamented divisions based on sectarianism in the Muslim world and called for unity. Addressing the sixth Religious Council meeting of the Presidency of Religious Affairs (DİB) in the capital Ankara on Thursday, Erdoğan also criticized Muslim countries “seeking answers in the West.”
"The fault lines among Muslims are further sharpened by the highlighting of differences in races, languages, sects and temperament," said Erdoğan, who has pursued closer relations for Turkey with Muslim countries during his tenure as prime minister and president.
Noting that the Turkish nation never discriminates between the Rashidun Caliphs, referring to the 30-year reign of the first four caliphs following the death of the Prophet Muhammad, Erdoğan said that Shiism and Sunnism are reflected as separate religions by some people.
Mentioning that sectarian and interest-oriented approaches have prevented Muslims from finding common ground, Erdoğan stressed that an understanding that sees self-interests above the interests of the ummah has nothing to offer to Muslims.
"Unfortunately, the Islamic ummah lost the grounds of coming together, doing common business and producing common solutions to their problems. Even today, we see this deficiency in many of our issues, including Jerusalem, Palestine, anti-Islamism, anti-terrorism, justice and human rights," he said, referring to the importance of consultation.
Touching on Turkey's effort toward the interests of Muslims, Erdoğan said Turkey takes actions against attacks on things sacred to Muslims and to ensure that the Islamic world takes a common position as well as fights for gaining self-confidence among Muslims.
“Muslims look for solutions in the Western capitals for their problems, instead of reaching out to their Muslim brothers and sisters for help,” he lamented.
Last Update: Dec 20, 2019 2:00 am
RELATED TOPICS