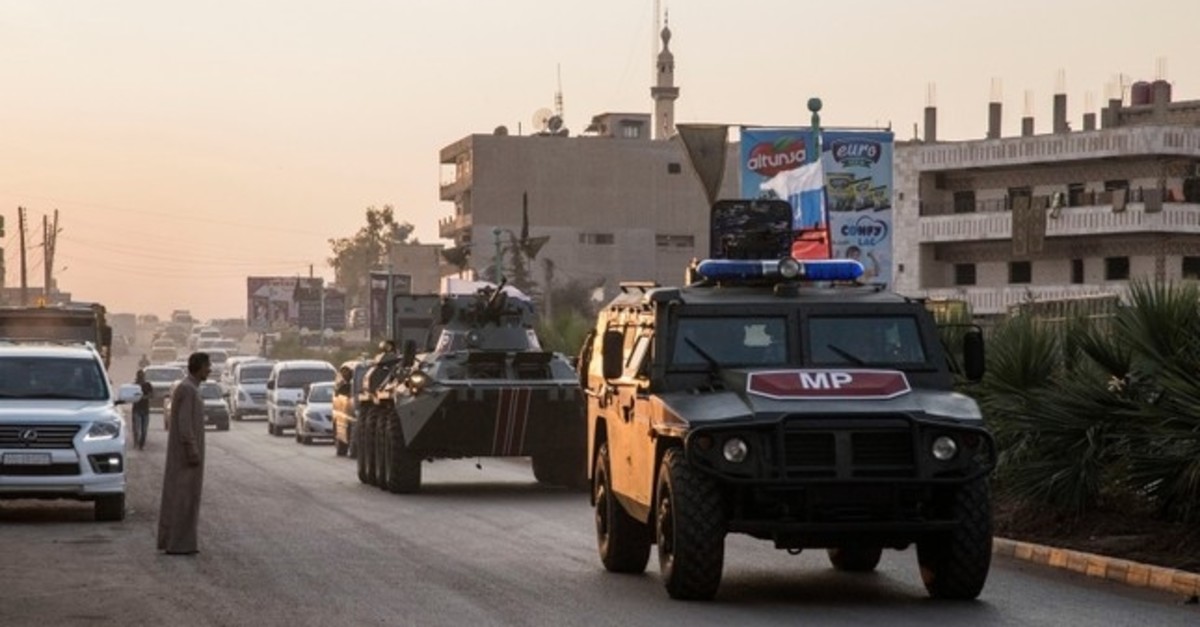 Russian forces patrol in the city of Amuda, north Syria, Thursday, Oct. 24, 2019. (AP Photo)
by Daily Sabah Nov 28, 2019 11:14 am
Russian officials had a meeting with the PKK terrorist group's Syrian offshoot, the People's Protection Units (YPG), in Ayn al-Arab, allegedly reassuring the terrorist group that they will do their best to ensure that the Turkish military does not attack the area.
Two Russian foreign ministry officials and a general attended the meeting with the terrorists, reports said.
There have been dozens of attacks by YPG forces in Syria. Turkey and Russia have completed 11 joint patrols in the region following the completion of the 150-hour withdrawal period as per the deal.
Turkey has complained to Russia about the YPG violating the terms of the deal, and both countries agreed to intervene in actions violating the deal, Putin said.
The officials also pledged to provide support to the YPG terrorists for services in the district, senior YPG terrorist Anwar Muslim reportedly said, adding that they also received assurance that Moscow will not allow a Turkish military operation in the region.
Meanwhile, reports noted that the Russian officials also had a meeting with Turkish military officers in Syria’s Tal Tamr, which is located southeast of the Ras al-Ayn district. The Turkish side reportedly expressed their concern about the Russian meeting and relations with YPG terrorists.
Turkey launched Operation Peace Spring, the third in a series of cross-border anti-terror operations in northern Syria targeting terrorists affiliated with Daesh and the YPG, on Oct. 9.
The operation, conducted in line with the country's right to self-defense borne out of international law and U.N. Security Council resolutions, aims to establish a terror-free safe zone for Syrians' safe return to the area east of the Euphrates river controlled by U.S.-backed Syrian Democratic Forces (SDF), which are dominated by YPG terrorists.
Ankara agreed with Washington on Oct. 17 to pause its operation to allow YPG/PKK terrorists to withdraw from the planned safe zone.
On Oct. 22, Ankara and Moscow reached a deal under which YPG/PKK terrorists were to pull back 30 kilometers south of Turkey's border with Syria within 150 hours, and security forces from Turkey and Russia would mount joint patrols there.
The PKK – listed as a terrorist organization by Turkey, the U.S. and the European Union – has waged a terror campaign against Turkey for more than 30 years, resulting in the deaths of nearly 40,000 people, including women, children and infants.
Last Update: Dec 20, 2019 1:59 am
RELATED TOPICS