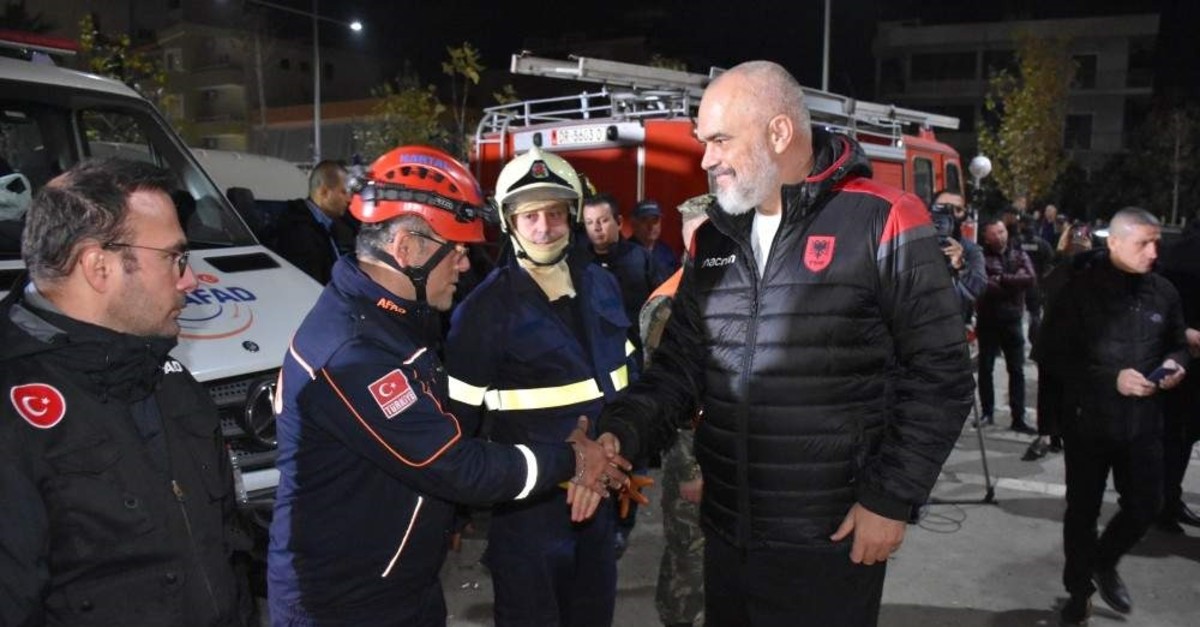 Efforts of Turkey and President Recep Tayyip Erdoğan will remain in the minds and will never be forgotten, Albanian Prime Minister Edi Rama said Wednesday after a devastating earthquake hit his country.

Rama said they were facing a striking situation due to the earthquake, expressing his gratitude to Turkey and Erdoğan.

"Turkey is a big and powerful country. We are a small and still weak country. But whenever Turkey needs, we will be there. Albanian people will never forget Turkey's help," he said as he examined search and rescue operations being carried out at a hotel in the beach area of Durres.

He reiterated that the earthquake occurred a few hours ago, reporting that more than 100 families had left their homes.

Pointing to the Turkish teams involved in the search and rescue efforts he said, “If there is a light in this darkness, it is the spirit of the community of many nations who are trying to help.”

He said more than 30 people were killed and 600 people wounded but warned that the death toll may rise. He thanked Turkey and other nations that opened the doors of their hospitals to Albania, saying that they have started to send out some of the injured.

The death toll from the magnitude-6.3 quake on Tuesday in western Albania rose to 31, according to the country's defense ministry. The health authority announced that 658 were injured, eight seriously.

Fifteen search and rescue experts are currently working in Durres, the epicenter of the quake, in hopes of saving those trapped under debris, said a statement by Turkey’s Disaster and Emergency Management Presidency (AFAD).

Health Ministry rescue teams are giving medical aid to quake victims, while the Turkish Red Crescent and AFAD humanitarian teams are providing a helping hand by pitching tents and other activities.

Alongside aid and recovery workers, trucks loaded with dozens of tents, hygiene kits and thousands of blankets were dispatched.

The aid was reportedly the first to arrive from any country since the quake.