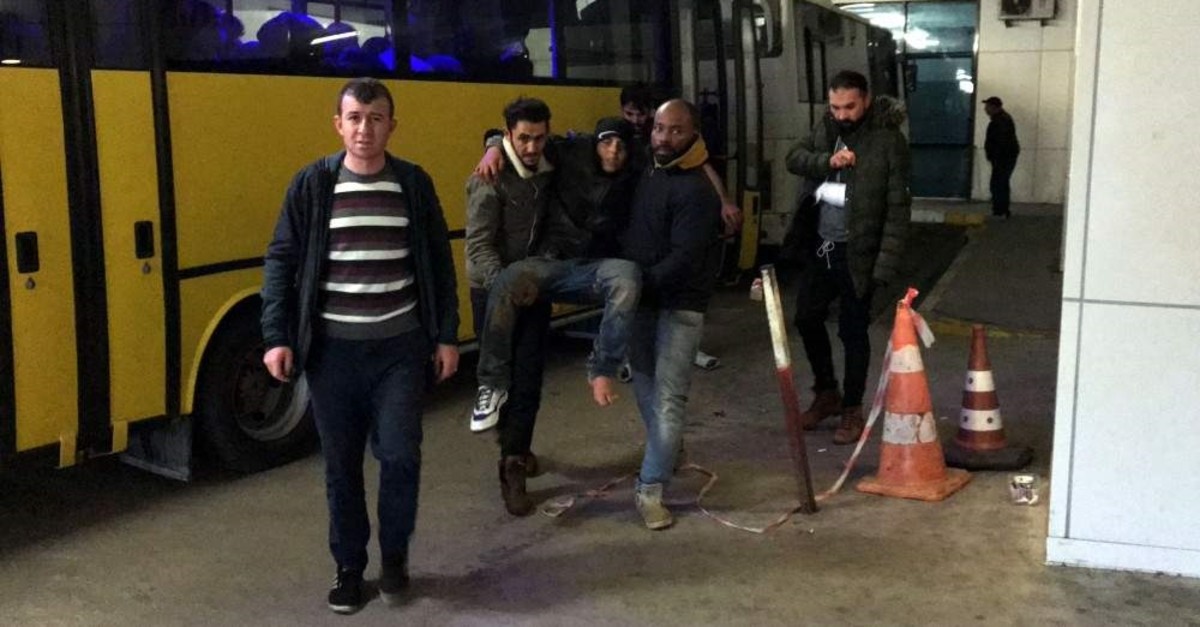 Turkey takes care of the refugees mistreated by Greece by going against the international law, beating and pushing back the migrants

A group of irregular migrants pushed back forcibly to Turkey after being beaten by Greek soldiers are being nursed back to health in Edirne, northwestern Turkey, near the Greek border.
The 68 irregular migrants caught by Turkish border guards in a forbidden military zone, including Afghan, Pakistani, Algerian and Bangladeshi nationals, had been trying to illegally cross into Europe.
Six of the migrants were found to be suffering injuries due to beating.
The injured were taken to hospital, while others were referred to the provincial refugee center after medical checks.
Rehber Yusufi, one of the injured migrants, said he was beaten by Greek border police and forcibly sent back to Turkey.
Yusufi said that five Greek police officers beat him for two hours and broke his arm.
According to local security forces in Edirne, in recent months Greece has been forcibly sending back irregular migrants to Turkey, in a move that violates the Geneva Convention, European Convention on Human Rights, and the U.N. Convention Against Torture.
While Turkey has been fulfilling its own part of the 2016 refugee deal, Greece has chosen another route by illegally pushing back migrants. According to Turkey's Interior Ministry, in the first 10 months of 2019, 25,404 irregular migrants were pushed back into Turkey by Greece, a significant increase from the 11,867 migrants pushed back in 2018. Under international laws and conventions, Greece is obliged to register any illegal migrants entering its territory; yet, this is not the case for thousands of migrants who were forcibly returned to Turkey.
Turkey and the European Union signed a deal in 2016 to curb illegal immigration through the dangerous Aegean Sea route from Turkey to Greece. Under the deal, Greece sends back migrants held on the Aegean islands they crossed to from nearby Turkish shores and in return, EU countries receive a number of Syrian migrants legally. The deal, reinforced with an escalated crackdown on human smugglers and more patrols in the Aegean, significantly decreased the number of illegal crossings.
Earlier this month, two Egyptian migrants told their harrowing experience over how Greek soldiers beat and sent 252 migrants back to Turkey. Similar claims were made in May, as three migrants recounted how they were tortured by Greek security forces and illegally pushed back.
Iraqi national Ibrahim Khidir, 35, and Egyptian nationals Hassan Mahmoud, 18, and Ahmed Samir, 26, were found in a rural area, half-naked and exhausted with deep marks from plastic bullets and battering on their bodies.
Greece’s overall treatment toward refugees is regarded as problematic by many as reports show the inhumane conditions that the migrants suffer in the country.
Recently, Doctors Without Borders pointed at the mistreatment of the refugees, calling for the Greek authorities to put an end to the suffering in the camps in the Greek islands. The humanitarian group also added that the vulnerable groups among the refugees should be evacuated from these camps.
The head of the group Christos Christou said that when he visited these camps last week, he saw a scene that was no different from the war or natural disaster zones. Underlining that the situation of the refugees in Greek islands had worsened radically in recent months, Christou said that it is unbelievable to see such conditions on a continent like Europe, which is usually considered as safe.
Greece is preparing a new project for the refugees, planning to host them on the islands of Samos, Chios and Lesbos, where closed settlements will be built with no allowance for entrance or exit.
The move, announced by Deputy Defense Minister Alkiviadis Stefanis and interpreted by some pundits as too similar to Nazi concentration camps, is planned to host 15,000 refugees. Currently, there are 27,000 refugees staying on those three islands.
These settlements will reportedly replace the existing camps and be used for identity determination, resettlement and extradition. With this new project, which is scheduled to be ready by July 2020, the refugees will not have the right to freedom of movement.
The deputy minister has also said the country intends to transfer 20,000 refugees from the mainland to the islands. Government spokesman Stelios Petsas, on the other hand, said these settlements will basically function as "detention centers" where the refugees denied refugee status by the European Union will be held.
Last Update: Dec 20, 2019 2:01 am
RELATED TOPICS